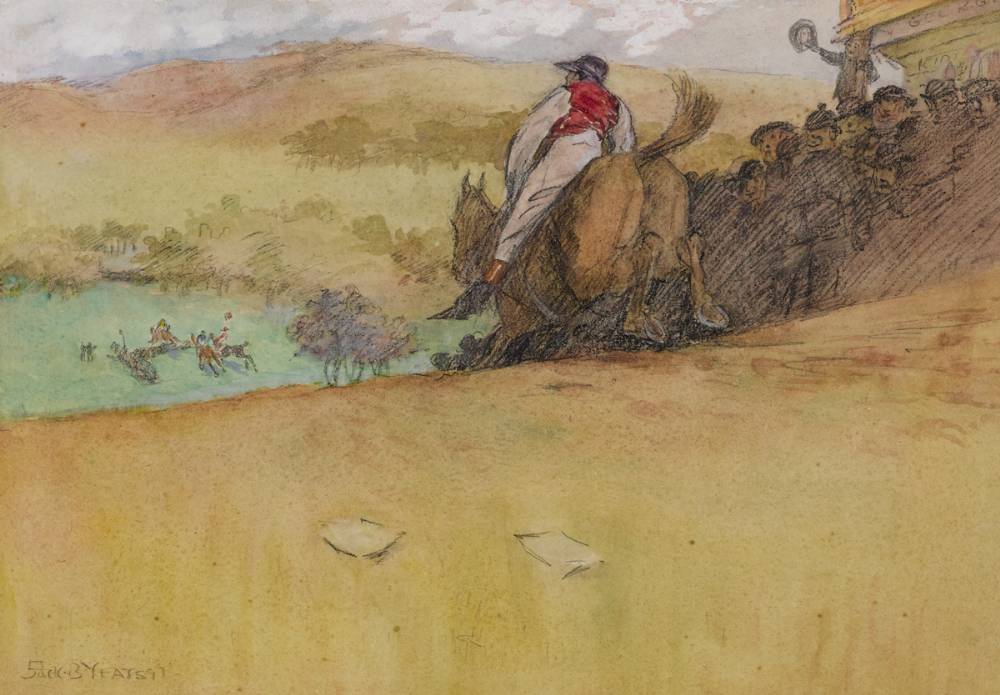 'While few watercolours survive from the earliest black and white period, it seems that Yeats was beginning to think seriously about concentrating on watercolour from 1894. In 1895 his 'Strand Races, West of Ireland' was accepted by the Royal Hibernian Academy; and the following year he painted a few watercolour landscapes in Devon, while looking for a house where he could settle away from London. At the time, like many other Irish artists, he must have seen more opportunities for a career in art in England than in Ireland, and his Devon ancestry would have drawn him naturally to that area.
What interested him in Devon was people rather than landscape. He was fascinated by the farmers and the horse traders, by the local rivalries and the fair entertainments, by the contenders in races and boxing matches, and no less by the audience who were glued to the performances. He worked assiduously in an original style which consisted occasionally of watercolour alone, but mainly of pencil or charcoal and crayon sketching, finished with a harmonious, sometimes vivid, wash. By November 1897 he had gathered together forty-three watercolour sketches for his first one-man exhibition at the Clifford Gallery in London's Haymarket.

Style was an obvious consideration by the artist in this first collection of watercolours, even to the affected nature of the signature. Used occasionally in his pen and ink period and featuring a box shape on top of the 'J', [as can be seen in the present work] this form of signature disappeared before the end of the century, to be replaced by a bolder but plainer form of autograph, generally in capital letters.'(1)