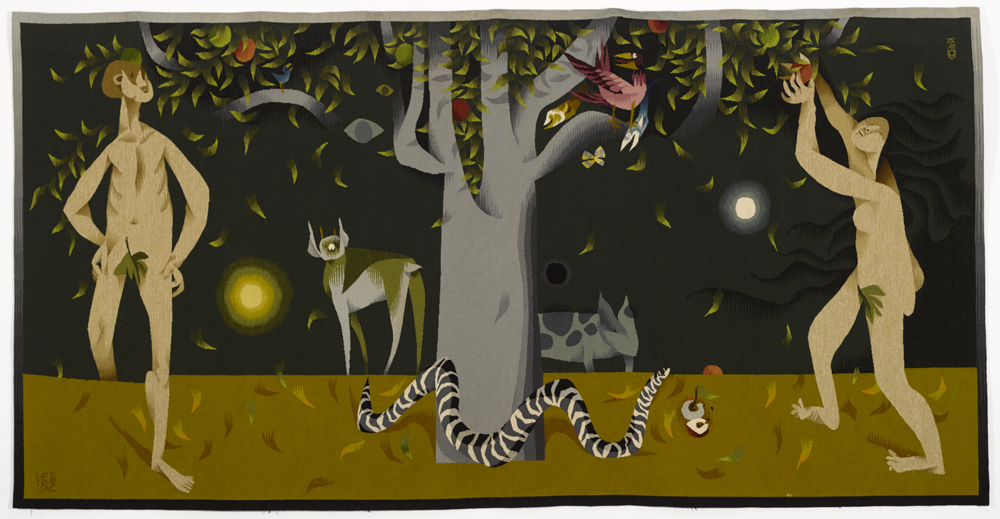 In 1951, Mrs. S.H. Stead-Ellis, whose art collection already included le Brocquy tapestries, commissioned three related tapestries, adaptable as screen, rug and firescreen, on the theme of the Garden of Eden - Adam and Eve in the Garden, Eden and Cherub. He treated the theme with archetypal imagery in a Classical, even traditional manner, the sun and the moon appearing respectively in the male and female spheres. The Tree of Knowledge of Good and Evil appears as in traditional French Medieval tapestry with the birds and butterflies among its leaves, but he adds a Surrealist aspect with eyes as well as leaves (as befits a tree of knowledge) and fish swimming in its branches.

Eden remains one of le Brocquy's most interesting works; the vibrant colourful design is based on a series of subdivisions of the classical Golden Section, yet the design bleeds off the tapestry in a most unclassical manner. The leaves of the Tree mingle with the tears of Adam and Eve while the fatal apple is discarded, bitten and segmented. The artist, in an interview with Harriet Cooke published in The Irish Times on May 1973, describes his involvement with tapestry as something he had "rather stumbled into by accident". But after that first commission from Edinburgh Weavers, the medium took on its own distinct fascination:

"I always found it a kind of recreation, involving completely different problems, it is refreshing in the sense that one is exhausted in a different way. There is also another aspect of it which is very exciting to the painter, who has this struggle with the angle, and that is the same aspect which is so exciting, say, to the Japanese Satsuma potter, when he puts his jar in the oven and waits on tenterhooks for it to come out. It always comes out a little different from what he had imagined and sometimes he has wonderful surprises. The method I use is a system of notation, a linear design which is numbered in the colours of a range of wools. Although one can visualise what one is doing, to a certain extent, when the tapestry is palpably there this causes an independent birth of something, and that is so contrary to the whole involved process of painting that it is rather refreshing."
Dorothy Walker (1929-2002)
Published on www.anne-madden.com
Sale over.
Whyte & Sons Auctioneers Limited, trading as Whyte's, hereinafter called "the auctioneer" exercises all reasonable care to ensure that all descriptions are reliable and accurate, and that each item is genuine unless the contrary is indicated. However, the descriptions are not intended to be, are not and are not to be taken to be, statements of fact or representations of fact in relation to the lot. They are statements of the opinion of the auctioneers, and attention is particularly drawn to clause 5 set out below. Comments and opinions, which may be found in or on lots as labels, notes, lists, catalogue prices, or any other means of expression, do not constitute part of lot descriptions and are not to be taken as such unless they are made or specifically verified by the auctioneers.