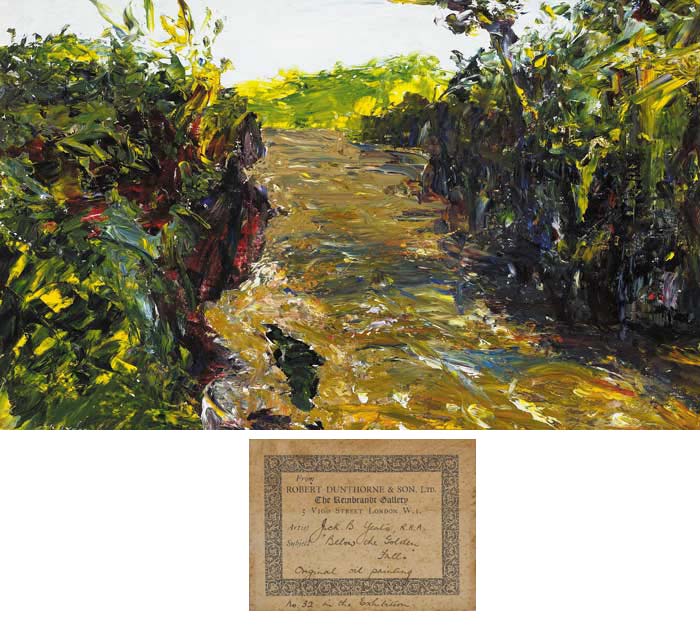 These changes and new qualities were picked up by more than one critic at the time in respect of Below the Golden Falls. It was described as an impression of the Liffey at its best in the Cork Examiner, and praised in The Morning Post [the London newspaper which later was amalgamated with The Daily Telegraph] as songs without words, or the formless music of dreams. The general view of critics was favourable, and the softer, warmer aspects of the painters art were emphasised.

In those days, Yeats had no hesitation  as he later had  about talking with the press, and The Cork Examiner published his views about Ireland. The one great change I do notice about masses of Irish people is that the young ones are in ascendant. That change has been brought about by the big slump in emigration to America. And he added: I think the boys and girls at political meetings leave the politicians wondering as to what they are thinking about.

A fellow artist in London, James Bone, gave Jack Yeats a printed quotation from Seneca which was appropriate to his career, then and later, and which he kept for the rest of his life: It is nothing for a man to hold his head in a calm; but to maintain his post when all others have quitted their ground, and there to stand upright, where all the other men are beaten down  this is divine and praiseworthy.

Bruce Arnold
This auction is an exceptional opportunity for the discerning collector. We have gathered together from private collectors and estates superb works by Roderic OConor, Jack B. Yeats, Percy French, William Conor, Frank McKelvey, Paul Henry, Harry Kernoff, Evie Hone, Mary Swanzy, Colin Middleton, Gerard Dillon, Louis le Brocquy, Camille Souter and many other great Irish artists
Whyte & Sons Auctioneers Limited, trading as Whyte's, hereinafter called "the auctioneer" exercises all reasonable care to ensure that all descriptions are reliable and accurate, and that each item is genuine unless the contrary is indicated. However, the descriptions are not intended to be, are not and are not to be taken to be, statements of fact or representations of fact in relation to the lot. They are statements of the opinion of the auctioneers, and attention is particularly drawn to clause 5 set out below. Comments and opinions, which may be found in or on lots as labels, notes, lists, catalogue prices, or any other means of expression, do not constitute part of lot descriptions and are not to be taken as such unless they are made or specifically verified by the auctioneers.