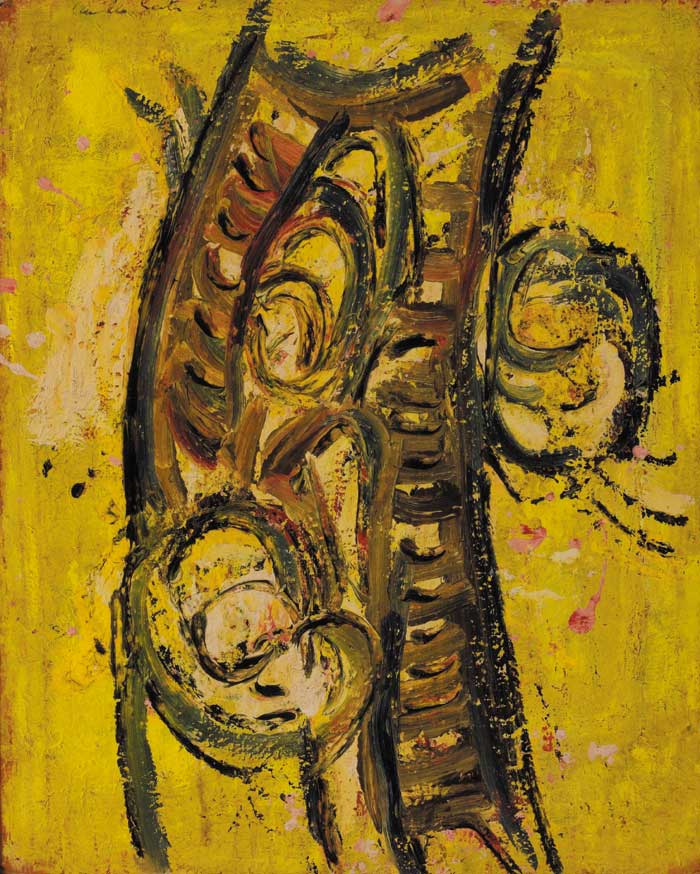 Developing a career while raising a family is never easy. Constantly on the move between London, Dublin, Achill and the continent, Camille Souters early years as a painter were a chaotic strugg...Read more
In the original frame of the Dawson Gallery, Dublin.

Developing a career while raising a family is never easy. Constantly on the move between London, Dublin, Achill and the continent, Camille Souters early years as a painter were a chaotic struggle for survival. In 1960 Frank Morris returned from London and things began to settle down a little. Within months, he and Souter had married. A year later, they moved to the gate lodge at the back of Charleville House, Enniskerry, County Wicklow. It was at the gate lodge that Souter first met Sir Basil Goulding, one of the countrys leading industrialists and one of the most acquisitive collectors of modern twentieth century Irish art of all time. As his son Tim would later recall paintings trickled into the house in the manner of stray pets until every wall and corner was filled.

Goulding arrived with the American painter Morris Graves and bought quite a few works. Within 20 years of that first meeting he had amassed some sixty paintings by Souter. This particular work once formed part of his collection. Its content is also indirectly connected with Goulding. When he first met Souter, he offered her the use of a small farmhouse at the top of the Ballyorney Road to use as a studio. Every day she would take her three children on her bicycle to school. After dropping them off, she would make the arduous journey back up to the top of the Ballyorney Road to work. Later in the day she would pick them up. Often these trips were made on foot and several children would tag along with her own. With the constant travelling up and down the hill, the farmhouse came to be known as the little Hell studio, the road to and from it became the Blasted Ballyorney. Her deep irritation and discomfort with her working arrangements not only manifests itself in the title of the painting. The central motif almost seems to buckle, bend and strain in twisted knot of green paint. It has been applied quite thickly by Souters standards and one senses almost in anger. It is though, a more beautiful painting than one would ever realise from reproduction. The yellow textured background forms a satisfying complimentary colour to the principal motif. Small droplets of pink give an added shimmering vibrancy.

Garrett Cormican
© April 2007
Whyte & Sons Auctioneers Limited, trading as Whyte's, hereinafter called "the auctioneer" exercises all reasonable care to ensure that all descriptions are reliable and accurate, and that each item is genuine unless the contrary is indicated. However, the descriptions are not intended to be, are not and are not to be taken to be, statements of fact or representations of fact in relation to the lot. They are statements of the opinion of the auctioneers, and attention is particularly drawn to clause 5 set out below. Comments and opinions, which may be found in or on lots as labels, notes, lists, catalogue prices, or any other means of expression, do not constitute part of lot descriptions and are not to be taken as such unless they are made or specifically verified by the auctioneers.