CHILDREN FEEDING A CALF, circa 1920 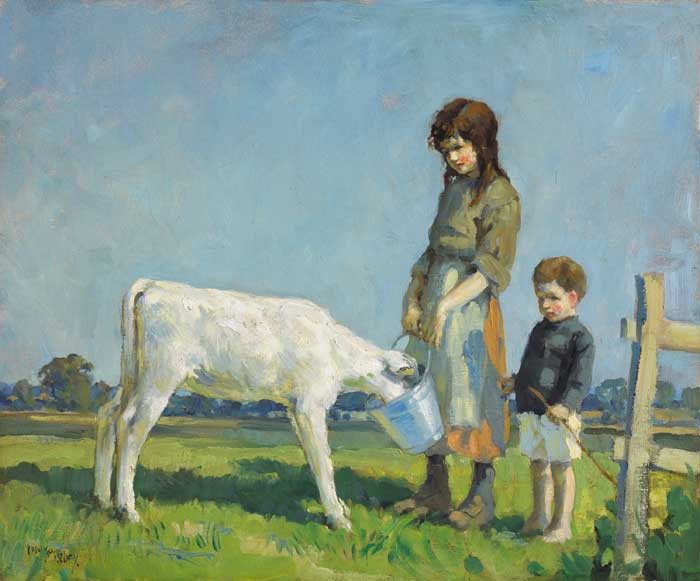 The setting is probably the farm belonging to the artists in-laws, near Bessbrook, in County Armagh, the two children being relatives. The nervous stance of the calf is well observed, as is the sense of intrigue on the faces of the children, the whole image being captured skilfully without contrivance or awkwardness. The even film of paint applied throughout, with the exception of slight impasto used for emphasis on the calfs back, is characteristic of McKelveys early work in general. The distinct delineation of space, from the foreground, where the narrative takes place, to the open pasture of the middle distance and the trees beyond, is also a general characteristic of the artist work. All has been set down directly, with little or no overpainting or other alteration  the brushwork in the sky is a minor tour de force  and the colours are delightfully fresh and strong in hue. As the Irish Times commented on 7 April 1924, McKelveys painting is an accomplishment, and his pictures declare it. One feels the sunlight in every one of them. The human element, or narrative, that is evident in so much of McKelveys art lends interest and frequently, as here, intrigue to his compositions, for often they mark the passing of a tradition that has all but disappeared from the countryside with the development of the semi-industrial complexes of modern times.