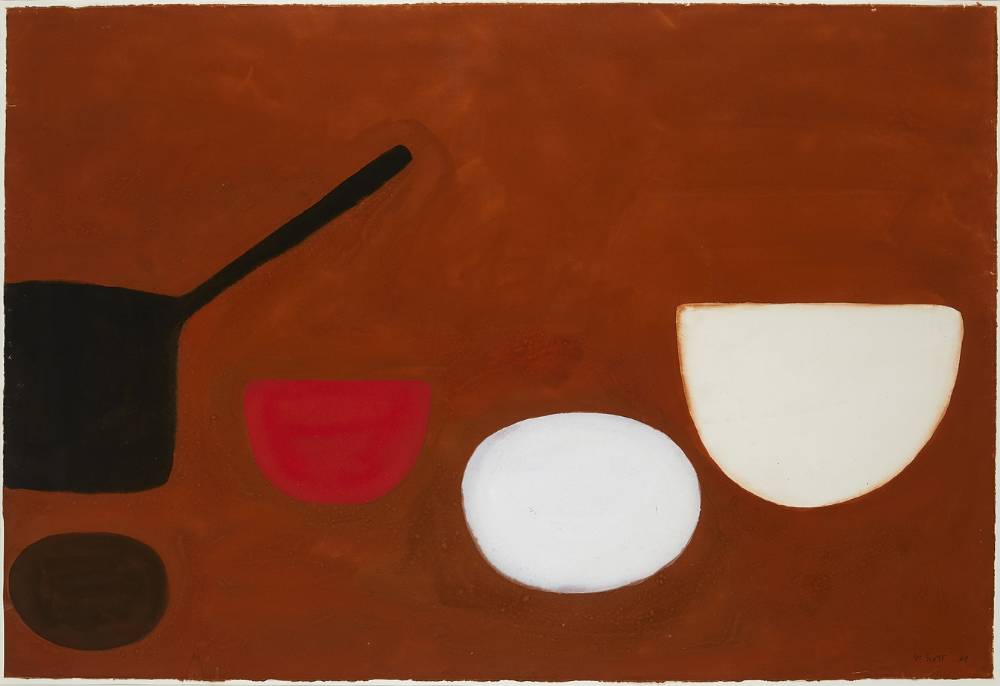 William Scott did not represent these objects naturalistically, however; rather, he seems less interested in their purposes than in their shapes, attracted to their potential for abstraction. Suggestive of a loose arrangement, strewn on a rectangular table-top, Scott simplified the kitchen objects into flat shapes, carefully placed and spaced across the surface of the painting to emulate their everyday reality. While earlier versions of the domestic theme in Scott's work often appear crowded and even chaotic, by the 1960s, a more airy and spacious aesthetic is in evidence.

The majority of Scott's artworks at this time are titled for their colours, and this work is no exception. While 'Chinese orange' suggests the spherical form of the fruit, the phrase alludes in particular to the orange-red tone that appears recurrently in his work. Scott has utilised the paint medium to create a slight 'halo' effect along the outlines of some of the objects. However minimalistic they may appear, their artistic hand-painted quality contrasts to the strict precision of 'hard edge' machine-aesthetic art that emerged in the US in the 1950s. In Scott's paintings, such object-forms resonate visually against their background.

The 'cut off' element of the first object on the left, whose profile evokes a heat-blackened pan, draws on late nineteenth-century artistic practice under the influence both of Japanese prints and of the emerging significance of photography. In Scott's work it suggests that the image continues beyond the picture frame, into the 'real' world. Through such methods, William Scott's work hovers between abstraction and experience.