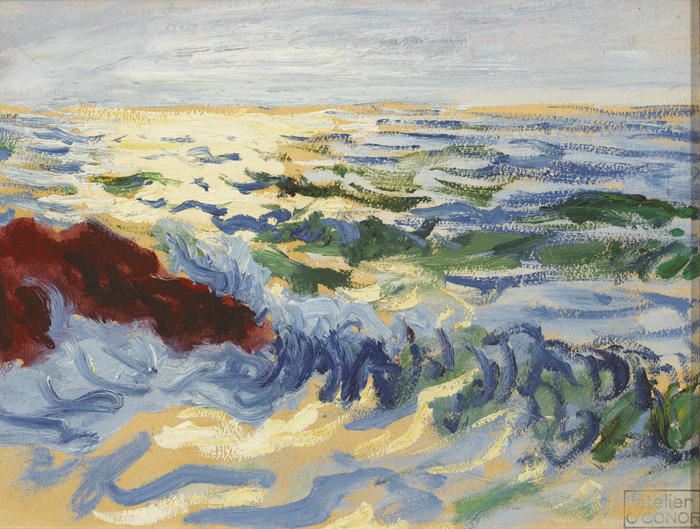 Within the first year of his arrival in France, O'Conor visited the popular artists' colony in the small town of Pont-Aven in southern Brittany and after several subsequent annual summer visits he took up residence there in 1891. His friendship with Paul Gauguin in Pont-Aven in 1894-95 and his affiliation with Gauguin's circle of artists acted as a catalyst to his artistic development, and he gained the respect of his closest friends who admired the breadth of his knowledge and his considerable skill as a colourist.

Coastal Scene, Evening belongs to a period in O'Conor's career when, after Gauguin's final departure from France for the South Seas in1895 and the gradual break-up of his group, he sought a quieter existence and moved to Rochefort-en-Terre in Morbihan. From there he made a visit to the Brittany coast in 1898, favouring that stretch of coastline between le Pouldu and Doëlan to the south of Pont-Aven. From the coastal path he made numerous paintings looking westwards over the rocky foreshore to the surging Atlantic, and in this case a turbulent sea, which stretched before him. These paintings range from the boldly expressive to the refined and detailed, and his marine works include a significant number of small paintings, of which Coastal Scene, Evening is typical. The high horizon line implies an elevated viewing position but the absence of foreground rocks, other than the one which juts into the composition from the left, confirms that the painter was close to the breaking waves, probably standing directly on the rocks rather than on the cliff path. The view is towards the sun but the colour range, with its absence of warm hues, would suggest an early afternoon rather than an evening light. This small and lively painting is spontaneously and boldly executed through O'Conor's typical painting method in similar works in which he used the brush as a drawing tool, leaving some of the ground to show through as he does here in the foreground. Few larger and more finished paintings have been identified which relate directly to O'Conor's numerous small seascapes of this type, leading to the reasonable conclusion that such works were painted primarily as studies or sketches.

Roy Johnston
August, 2012
Whyte & Sons Auctioneers Limited, trading as Whyte's, hereinafter called "the auctioneer" exercises all reasonable care to ensure that all descriptions are reliable and accurate, and that each item is genuine unless the contrary is indicated. However, the descriptions are not intended to be, are not and are not to be taken to be, statements of fact or representations of fact in relation to the lot. They are statements of the opinion of the auctioneers, and attention is particularly drawn to clause 5 set out below. Comments and opinions, which may be found in or on lots as labels, notes, lists, catalogue prices, or any other means of expression, do not constitute part of lot descriptions and are not to be taken as such unless they are made or specifically verified by the auctioneers.