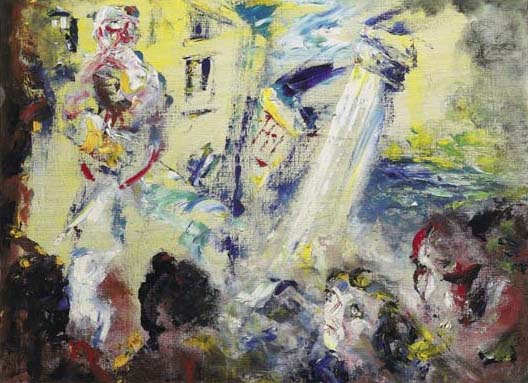 The sense of drama and action is to the forefront in both works. In My Beautiful, My Beautiful! Yeats returns to his first love as an artist, which was horses, on this occasion not racing but the more sentimental feelings of the owner of an Arab steed forced to part with it, and deciding to free it instead of letting it fall into another owners hands. In Forgive Him the other love of Yeatss life, for theatre, performance and entertainment, comes to the fore.

Once again, the radiance of the artists palette, his brilliant use of blues and yellows, his technique of coming in close on his subject, work dramatically. The scene is of a highly dramatic figure, that of a highwayman, striding onto a stage in a crowded theatre. He is shown against the audience in the foreground, and the effect is to create tension and interest.

It would be wrong to see this as triumphant in terms of Yeats himself. His inner soul was satisfied with what he did in these final years, but he did it in isolation, in the spirit of his mind. He was largely neglected as an artist at the end. He relied on his friends. His wife had died in 1947 and he was preparing to go himself. Not surprising at 82. What surprises is the vigour and command of his work. It was initially owned by his dealer, Victor Waddington, passing through other collections later.

Bruce Arnold,
Author of Jack Yeats, Yale University Press, 1998
Dublin, March 2005
Superb fully illustrated 160 page catalogue available by post at 12 (Ireland), £8.50 (Great Britain) 16 (Europe) or $25 elsewhere
Whyte & Sons Auctioneers Limited, trading as Whyte's, hereinafter called "the auctioneer" exercises all reasonable care to ensure that all descriptions are reliable and accurate, and that each item is genuine unless the contrary is indicated. However, the descriptions are not intended to be, are not and are not to be taken to be, statements of fact or representations of fact in relation to the lot. They are statements of the opinion of the auctioneers, and attention is particularly drawn to clause 5 set out below. Comments and opinions, which may be found in or on lots as labels, notes, lists, catalogue prices, or any other means of expression, do not constitute part of lot descriptions and are not to be taken as such unless they are made or specifically verified by the auctioneers.