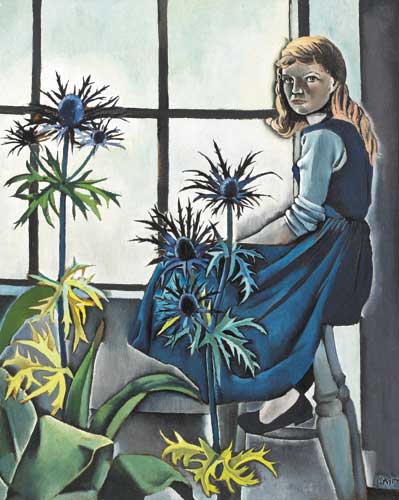 In 1952 he held his first solo exhibition at the Waddington Galleries. Again, the critic for the Dublin Magazine reviewed the exhibition and wrote that it shows his power to convey the full impact of the object, as though the spectator were experiencing it for the first time. Among the works shown were Girl on a Couch and Interior (both shown forty years later at Swifts retrospective at IMMA) and almost certainly the present work, under the title: Girl with Thistles. The sitter is most probably Swifts sister-in-law, the poet Claire McAllister, who sat for other works of this period.


As with most of Swifts works from the early fifties, the influence of Lucian Freud is clear here, particularly in the dispassionate, scientific scrutinity of the human form. The pair met circa 1949-50 when, as Anthony Cronin recalls, they shared a flat in Hatch Street, Dublin. Freud was then courting his future wife, Caroline Blackwood (see lot 6), and was sharing Swifts studio. Freud was five years older than Swift, and was inevitably influential on the younger artist, but the influence may have been at least partially two-way. Swift and Freud met again later in the fifities in London, where Swift co-edited a literary and arts journal, X, and associated with many other leading artists of the period, including Francis Bacon, John Minton and Leon Kossof. Throughout the fifties Swift moved back and forth between London and Dublin, providing a link between those of the Dublin literati and artists who socialised in McDaids  such as Patrick Kavanagh, John Ryan and Edward Maguire  and the Soho intelligentsia.

In 1962 Swift and his wife first visited the Algarve in Portugal, where they eventually settled. Along with Portuguese artist Lima de Freitas, they established the Porches Pottery, producing hand-painted tiles and table-ware. With his co-editor from X, David Wright, Swift also wrote illustrated guidebooks to the Algarve. Swift continued to exhibit paintings in Dublin on occasion; his celebrated portrait of Patrick Kavanagh (CIÉ collection) was shown at the RHA in 1968 and he was included in the 1971 ROSC exhibition, The Irish Imagination. In 1974 he had a significant one-man exhibition in Lisbon, but Irish audiences were deprived of seeing his work en masse until a decade after his death, when IMMA mounted a major retrospective. The exhibition received great critical acclaim, with fellow artists such as Derek Hill declaring Swift to be probably the most formidable Irish artist of this century (Irish Times, 24 January 1994).
Whyte & Sons Auctioneers Limited, trading as Whyte's, hereinafter called "the auctioneer" exercises all reasonable care to ensure that all descriptions are reliable and accurate, and that each item is genuine unless the contrary is indicated. However, the descriptions are not intended to be, are not and are not to be taken to be, statements of fact or representations of fact in relation to the lot. They are statements of the opinion of the auctioneers, and attention is particularly drawn to clause 5 set out below. Comments and opinions, which may be found in or on lots as labels, notes, lists, catalogue prices, or any other means of expression, do not constitute part of lot descriptions and are not to be taken as such unless they are made or specifically verified by the auctioneers.


HOW TO BID:
We hold two types of auction - TIMED and LIVE SALEROOM
1. TIMED AUCTIONS