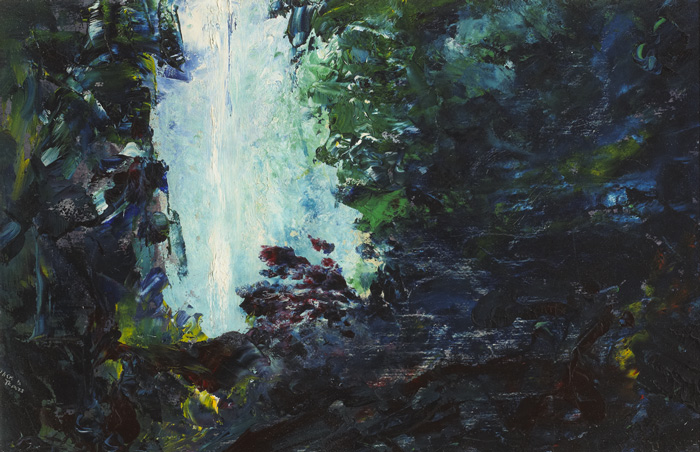 The Stolen Child -
Where the wandering water gushes
From the hills above Glen-Car,
In pools among the rushes
That scarce would bathe a star ...
(W. B. Yeats, The Stolen Child, 1886)

The waterfall became an important symbol of Jack's youth and of the beauty of the West in his oil paintings. Glencar Waterfall appears in a number of works, most famously as the backdrop to In Memory of Boucicault and Bianconi, 1937 (National Gallery of Ireland).

Glencar is known for its rich vegetation. According to Hilary Pyle's description of the waterfall, it flows through fields of wild garlic and rhododendrons and tall trees surround it.1 Yeats' painting, with its use of rich blues and greens, and its touches of yellow and deep red, recreates the sensuous experience of standing in such a place. The pale form of the water contrasts with its verdant surroundings. Yeats uses a low viewpoint which brings the viewer into the centre of the landscape. Rather than setting the waterfall in the middle of the composition, Yeats sets it to the left-hand side and frames it with the surrounding shrubbery, as if one had suddenly come across this wondrous sight.

In its evocation of the lushness of the Irish countryside the painting is prophetic of the later treatment of the Irish landscape as an intimate and mysterious subject by such artists as Seán McSweeney and Barrie Cooke. Yeats' treatment of the pigment in the painting is also interesting in terms of later Irish landscape painting. He is very concerned with the handling of the paint surface. The waterfall is painted, at least partly, over the dark green pigment of the foliage. It is a flat, opaque element in the composition which differentiates it from its surroundings. Yeats departs from all the usual landscape conventions and creates, instead, a remarkable painting in which his complex treatment of the surface takes precedence over other pictorial concerns.

1 Hilary Pyle, Jack B. Yeats. A Biography, 1970, p. 19.
Closing for entries on 18 October.
Whyte & Sons Auctioneers Limited, trading as Whyte's, hereinafter called "the auctioneer" exercises all reasonable care to ensure that all descriptions are reliable and accurate, and that each item is genuine unless the contrary is indicated. However, the descriptions are not intended to be, are not and are not to be taken to be, statements of fact or representations of fact in relation to the lot. They are statements of the opinion of the auctioneers, and attention is particularly drawn to clause 5 set out below. Comments and opinions, which may be found in or on lots as labels, notes, lists, catalogue prices, or any other means of expression, do not constitute part of lot descriptions and are not to be taken as such unless they are made or specifically verified by the auctioneers.