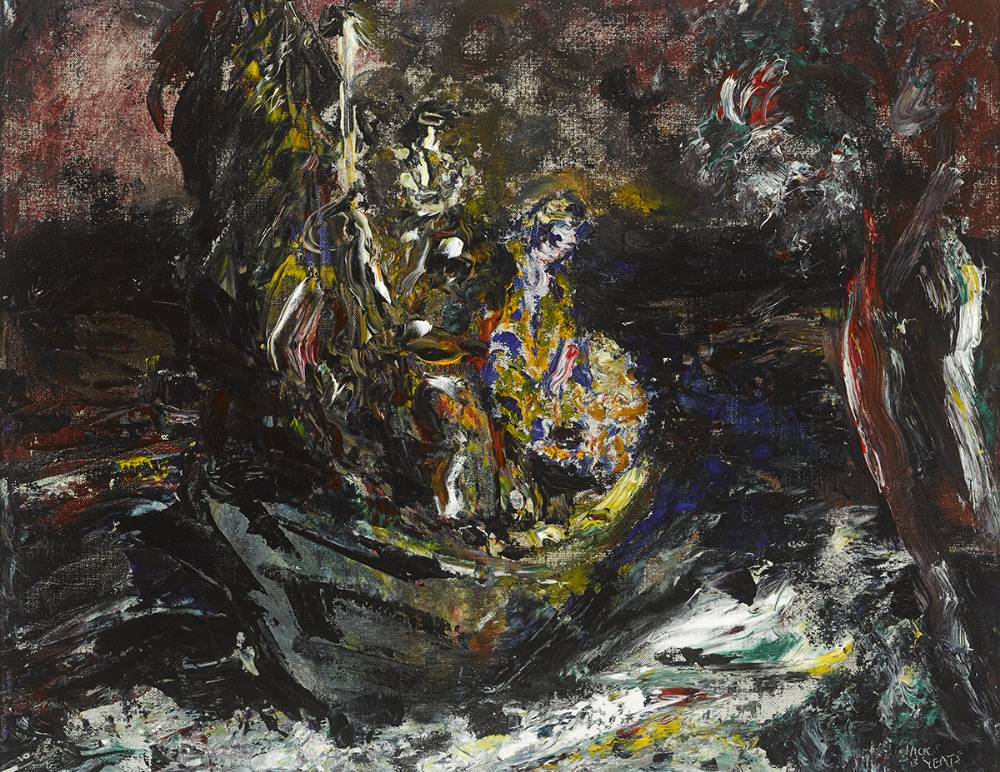 The enigmatic title, Hope, gives little clue as to what the subject of the painting is. Yeats occasionally used emotions as the titles of his paintings, most famously in his late masterpiece, Grief, (1951, National Gallery of Ireland). The passive female figure is intended to be allegorical, perhaps evoking the idea of courage and faith in humanity. In the history of art, a boat may represent something that enables the safe crossing of the sea or of life's journey. In 1954 Yeats painted a very different work of a young boy sailing a toy boat, entitled The Ship of Hope, (1954, Private Collection) and the title Hope may therefore refer to the boat and the trust in its secure crossing. The dark skies and stormy waves indicate the uncertainty of the circumstances and add to the drama of the scene. Yeats uses a nautical voyage to evoke a similar sense of anticipation in A Passage is Required, (1953, Private Collection).
The complex application of paint obscures any superficial reading of the work as a mere illustration. Colour is thinly applied in the skies and in the structure of the boat but is deep and thick in the delineation of the two figures and in the white waves through which the boat moves. White, yellow and strong blue and red touches denote reflected light, the source of which seems to be the waves themselves. The details are deliberately unclear, forcing the viewer to engage physically with the work, in order to make sense of its elements. As in his other paintings, Yeats ensures that the tangible fact of the painting prevails.

AUCTION: Monday 16 September 2019, starting at 6pm
VIEWING: Saturday to Monday 14-16 September, 10am to 6pm daily
VENUE: Royal Dublin Society Exhibition Centre (RDS) Hall 6, Anglesea Road, Ballsbridge. Free parking for Whyte's clients
Whyte & Sons Auctioneers Limited, trading as Whyte's, hereinafter called "the auctioneer" exercises all reasonable care to ensure that all descriptions are reliable and accurate, and that each item is genuine unless the contrary is indicated. However, the descriptions are not intended to be, are not and are not to be taken to be, statements of fact or representations of fact in relation to the lot. They are statements of the opinion of the auctioneers, and attention is particularly drawn to clause 5 set out below. Comments and opinions, which may be found in or on lots as labels, notes, lists, catalogue prices, or any other means of expression, do not constitute part of lot descriptions and are not to be taken as such unless they are made or specifically verified by the auctioneers.