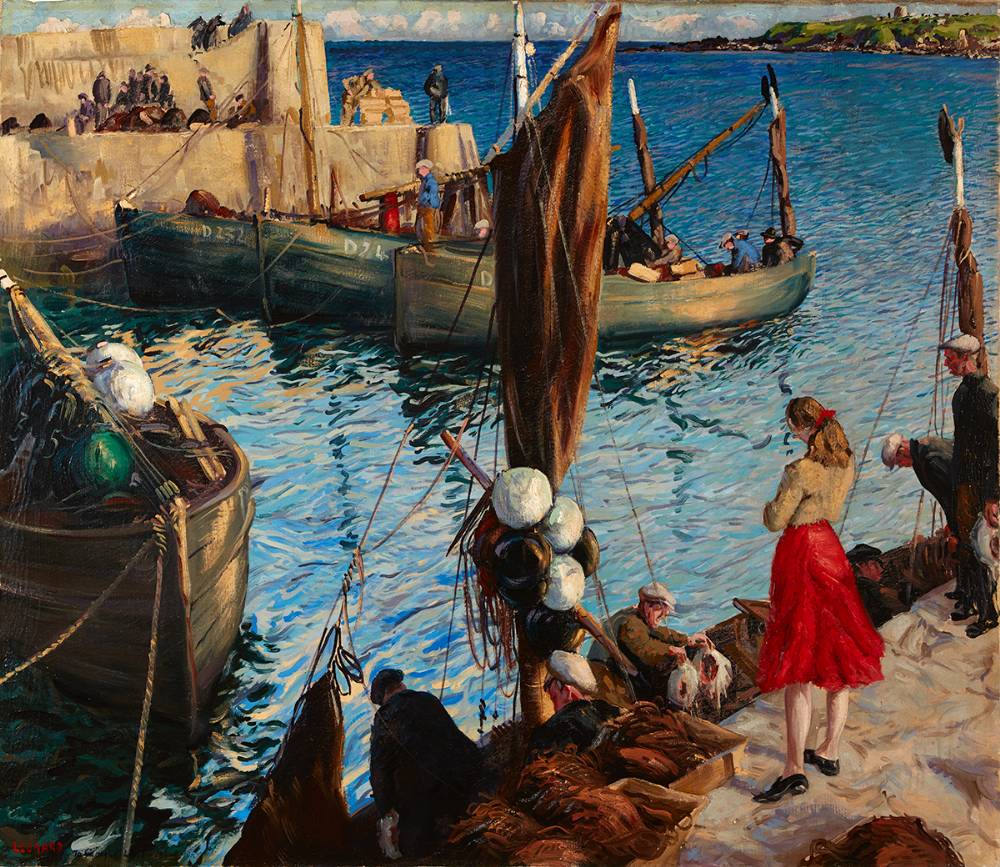 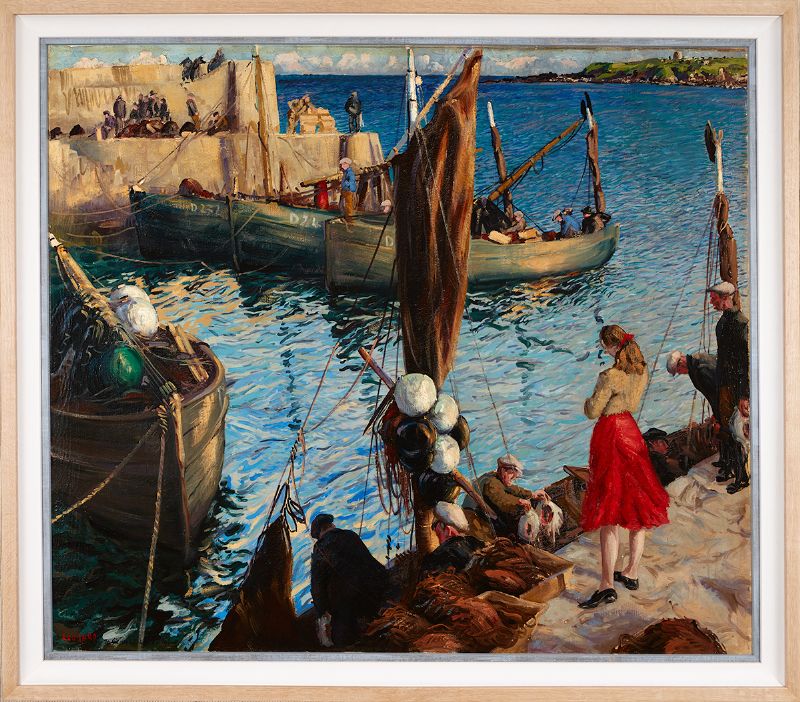 Reporting on the Waddington exhibition opening in the Irish Press, critic 'M. J. L' praised the artist's work, singling out his seascapes in particular, noting how 'ships and sail worked into an imaginative pattern upon a background of still grandeur in Loughshinney [sic] Harbour effectively suggest the romance and drama ever latent in the seascape.'(1) The harbour was a subject to which Leonard frequently returned, showing several canvases of that title at the RHA, the Oireachtas Art Exhibition, and other venues. The present Loughshinny Harbour, County Dublin is a lively and engaging depiction of the busy fishing port. Framed by the mass of the harbour wall and the curve of the coastline beyond, Leonard shows the fishermen busy at their work: preparing and unloading their catch, and perhaps offering it for sale directly from the boat. The arrangement of dock lines, masts, nets and buoys add a sense of industry and bustle, matched by the lapping water, conveyed in a flurry of short brushstrokes. The bright red skirt worn by a young woman on the harbour wall anticipates Leonard's later focus on colourful clothing.

Born in Rush, Co. Dublin, Leonard studied with Keating and Maurice MacGonigal at the National College of Art from the late 1930s onwards. Awarded several Taylor Art prizes, Leonard first exhibited at the RHA in 1941 and was elected an associate member in 1942. With Ciaran Clear, Fergus O'Ryan, Tom Nisbett and Bea Orpen (amongst others) Leonard was a founder member of the Fingal Arts Group in 1963, working to promote the arts throughout Leinster. Prolific in his output and exhibition activities, Leonard also taught at Sandford Park, Ranelagh, the Technical School, Killester, and Mercy Convent, Coolock. 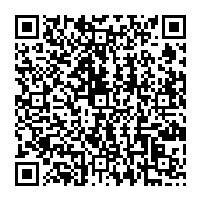 VIEWING
At our galleries:
Wednesday to Friday 26-28 May, 10am to 5pm
Saturday & Sunday, 29 & 30 May, 2pm to 5pm
Monday, 31 May, 10am to 4pm.
Under Covid-19 health and safety regulations, all visitors must wear face masks and abide by social distancing recommendations while in our premises.

AUCTION
Monday 31 May at 6pm online at bid.whytes.ie
Telephone and absentee bidding available.
Due to Covid-19 health safety regulations,we cannot admit people to the auction room.
Whyte & Sons Auctioneers Limited, trading as Whyte's, hereinafter called "the auctioneer" exercises all reasonable care to ensure that all descriptions are reliable and accurate, and that each item is genuine unless the contrary is indicated. However, the descriptions are not intended to be, are not and are not to be taken to be, statements of fact or representations of fact in relation to the lot. They are statements of the opinion of the auctioneers, and attention is particularly drawn to clause 5 set out below. Comments and opinions, which may be found in or on lots as labels, notes, lists, catalogue prices, or any other means of expression, do not constitute part of lot descriptions and are not to be taken as such unless they are made or specifically verified by the auctioneers.