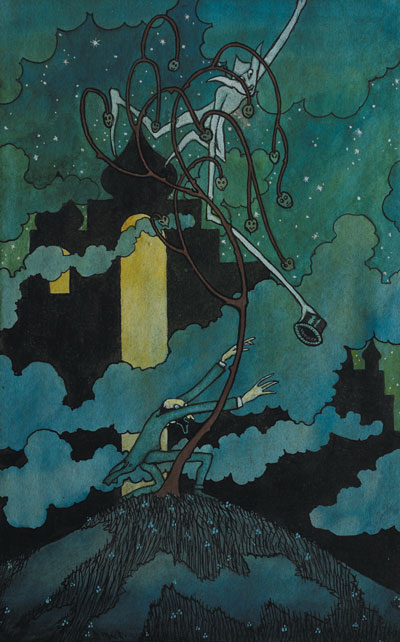 These three exceedingly rare and early examples by English-born Irish actor, dramatist, impresario, writer, poet and painter Mícheál Mac Líammóir are perhaps the earliest of his ouevre ever offered, dating to 1917. Enchanting and, at the same time, slightly sinister they exude all the charm and Celtic mysticism one might expect from a Renaissance man of the era and are testament to the artists imagination which repeatedly drew inspiration from ancient Irish folklore as well as from his celebrated contemporary, Jack Butler Yeats.

Born Michael Willmore, near London, the artist began his career early as a child actor playing roles such as Oliver Twist at the tender age of eleven at His Majestys Theatre. As a young man he became fascinated with the Irish language and joined a London branch of the Gaelic League and became a self-taught gaelgóir. Theo Snoddy notes, On coming to Dublin, he signed his watercolours Michael Willmore but in a small part at the Abbey Theatre in 1917 he became Mícheál MacLiammóir.

Amusingly, these early works trace this transition, two are signed Micheal Willmore, 1917, the latter is signed Míceál Mac Uallmóir. Snoddy notes an astonishing twelve different signature formats throughout the artists career. In 1928 Mac Líammóir founded The Gate Theatre with partner Hilton Edwards, who aptly described his graphic work as having, a romantic beauty, an evocation of things other than the obvious and the commonplace. An almost foot-light glamour is never really absent from them, or at least a light not seen by ordinary eyes. Never is gaiety far from his work, and there is always a sense of other-worldliness, whether that other world be of the Sidhe or of those lands that lie behind the theatre curtain that is about to rise. (Foreword, The Dublin Arts Festival catalogue)

These works were gifted by the artist to the current owners father who was a friend and colleague of the artist and have since been lent to several exhibitions as well as to Radió Teilifís Éireann (RTÉ) c.1999 for the documentary, Dear Boy: The Story of Mícheál Mac Líammóir.
Entries invited. Contact us at 01 676 2888 or info@whytes.ie for advice and valuations
Whyte & Sons Auctioneers Limited, trading as Whyte's, hereinafter called "the auctioneer" exercises all reasonable care to ensure that all descriptions are reliable and accurate, and that each item is genuine unless the contrary is indicated. However, the descriptions are not intended to be, are not and are not to be taken to be, statements of fact or representations of fact in relation to the lot. They are statements of the opinion of the auctioneers, and attention is particularly drawn to clause 5 set out below. Comments and opinions, which may be found in or on lots as labels, notes, lists, catalogue prices, or any other means of expression, do not constitute part of lot descriptions and are not to be taken as such unless they are made or specifically verified by the auctioneers.