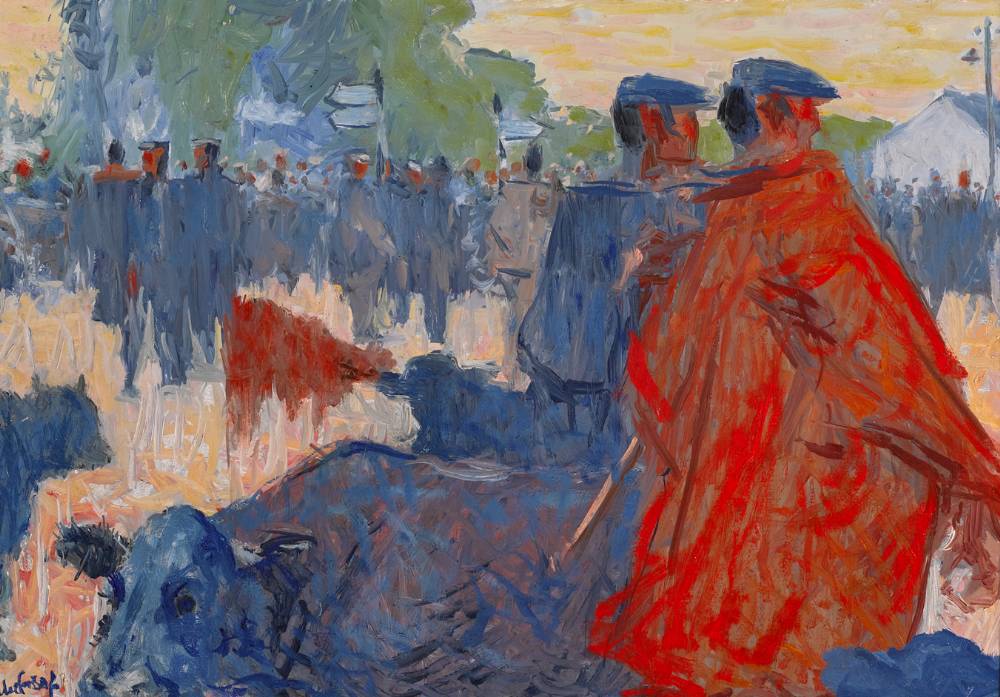 He stumbled home from Clifden fair
With drunken song, and cheeks aglow.
Yet there was something in his air
That told of kingship long ago.
I sighed - and inly cried
With grief that one so high should fall so low.

He snatched a flower and sniffed its scent,
And waved it toward the sunset sky.
Some old sweet rapture thro' him went
And kindled in his bloodshot eye.
I turned - and inly burned
With joy that one so low should rise so high.

MacGonigal loved painting fairs and cattle. The cattle fairs of Connemara always fascinated him, as much for the cattle dealers as for the animals themselves, and Clifden and Maam Cross drew large crowds of sellers and buyers. The men and women from the surrounding mountain areas driving their cattle to sale, the small farmer with two or three to sell and often the MacGonigal family neighbour, Maggie from Faul, with her much prized three or four cows would all be there.

The Woods family from Roundstone (buyers), Joyces (sellers and buyers), the Westmeath and Longford buyers, Farrells, Molihans would all be there with the Purcell brothers... this latter group with big lorries and flashing bundles of notes bestrode the fairs like Lords of the Atlas.
But they knew not only the cattle over the years but the sellers and would always watch out for the seller with few but high-quality beasts from limestone fields. (Stock of this provenance built up strong bones and good lean meat and fatty cattle were going 'out of fashion' by this time).

The artist, then in his seventies, had reverted to his colour palette of many years previously, brilliant reds, scarlets, vivid greens all deriving from his interest in prismatic colour and his early training in the stained-glass studios of his uncle Joshua and cousin Harry Clarke.
In the present work the colour is so vivid that the two cattlemen appear to be moving forward. The artist anchors the composition with the signpost and echoes and re-echoes the colour composition by notes of red on a diminishing scale. The composition is further anchored by the foreground cattle and the young bull calf in the centre of the composition, positioned just 'off' centre to stop the eye rushing out of the frame.

The artist's interest in dynamic asymmetry is captured to great effect in this painting. But the balance of it all is the telling of the tale, the pictorial logic of its making if you like, and all reflecting the artist's intense interest in the scale and importance of figurative processes. The origins of painting into white (the prismatic scale) used traditionally in the medium of stained-glass to gain its point, beautifully captured in the present work.

WHAT IS A TIMED AUCTION?

Timed auctions do not have an auctioneer calling the bids – there’s just a bidding time frame and whoever bids highest during the time frame wins. Each lot can be bid on for a defined time period. At the end of this period, the bidder who has submitted the highest bid wins the lot, provided the bid exceeds the reserve price. You tell us the most you’re willing to pay – and we’ll bid intelligently for you, only bidding enough for you to meet the reserve or stay in the lead. Don’t worry, your maximum bid is not disclosed, and is held in confidence on our bidding system.
WHEN ONLINE BIDDING STARTS – FROM 10AM ON 1 DECEMBER TO 13 DECEMBER (ENDING 6pm-10pm approximately) - YOU CAN LEAVE BIDS and your bid will start at one step above the previous bid or at the start price if no other bid. You will be notified by email if you get outbid before the auction starts.
ONCE THE AUCTION BEGINS TO FINISH ON 13 DECEMBER EMAIL NOTIFICATIONS CEASE and you should follow the auction on-line to see how your bids are doing. Make sure you have logged in if you wish to bid.
WHEN THE AUCTION BEGINS TO FINISH ON 13 DECEMBER the bidding for each lot remains open for 45 seconds at a start price determined by the reserve or bids already received. Each lot will be open and remain open for bidding until its end time is reached; the end time will be extended by 60 seconds if another bid is received. At the end time, if there are no further bids and the highest bid received equals or exceeds the re serve price the lot is sold to highest bidder.