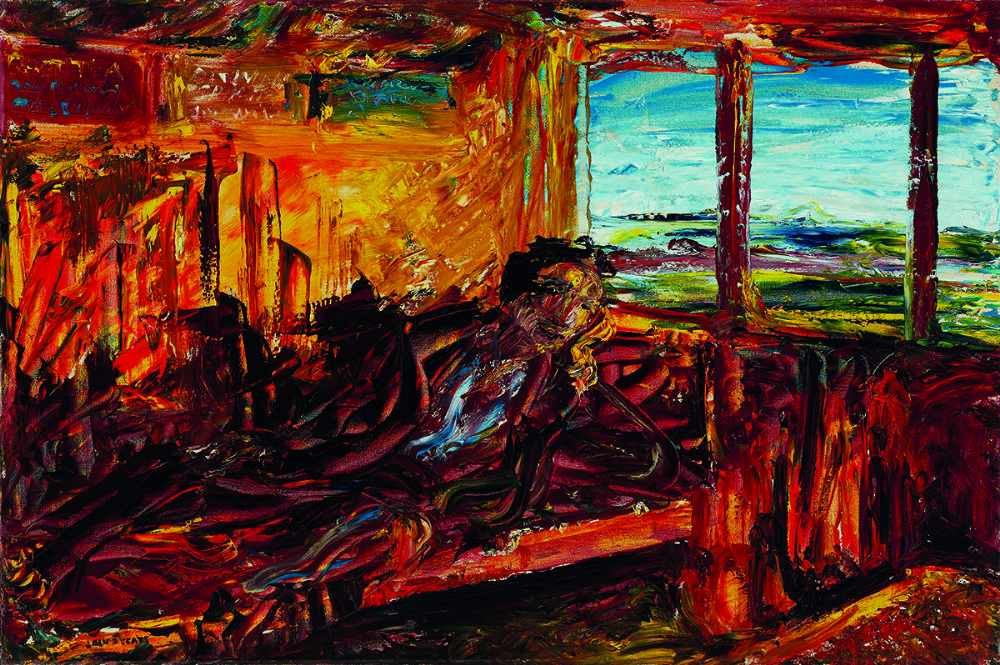 The green blue waterlogged land, visible through the window, creates a poignant
backdrop. By contrast, the interior of the carriage is made of deep reds and oranges,
suggesting its polished wood and upholstered décor. Its warm tones evoke a
womb-like environment in which the traveller can reflect. While advertisements are
visible on the rail above him they are subsumed into the overall atmosphere of the
space.

Yeats travelled by rail across Ireland extensively throughout his career. It is a major
subject in his paintings and in his writings. It provided the perfect trope for
juxtaposing an uncultivated world with that of the modernity of modern transport.
As in Evening in Sligo, another work that belonged to OMalley, the view through
the window can be read as symbolic of the figures thoughts and imagination. The
train provides a contemporary manner of experiencing the landscape, at one step
removed and yet in this case allowing private contemplation. OMalley shared Yeats
reverence for the Irish countryside and had many memories of travelling through it
as a young commander during the War of Independence and the Civil War.

1. Ernie OMalley, Introduction, Jack B. Yeats National Loan Exhibition Catalogue, National
College of Art (Dublin, June-July 1945).
Whytes, in association with Christies, offered works from The Ernie OMalley Collection, highlighted by five paintings by Jack Butler Yeats. Comprised of 100 lots, also including early sketches by Yeats and work by the artists Mainie Jellett, Evie Hone, Louis le Brocquy, Colin Middleton and Norah McGuinness, the auction formed an anthology of Irish art from the early 1900s to the 1950s. Ernie OMalley was a leading revolutionary an in Ireland from 1916-22 who went on to publish two books detailing his experiences. The sale and international exhibitions provided an opportunity to discover his private passion for art and the relationships he developed with artists he encountered in America and Ireland.

HOW TO BID:
We hold two types of auction - TIMED and LIVE SALEROOM