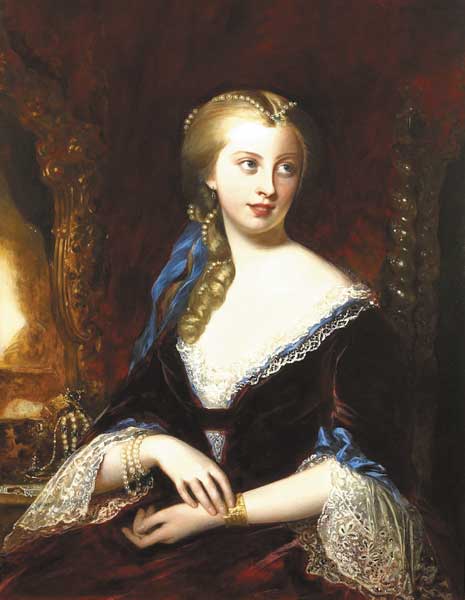 Riche and rare were the gems she wore
And a bright gold ring on her wand she bore
But oh! Her beauty was far beyond
Her sparkling gems, or snow white wand.

An allegory of `Erins honour and Erins pride, it tells the story of a young lady of great beauty who adorned with jewels and costly dress, undertook a journey alone, from one end of [Ireland] to another, but `such an impression had the laws and government of [King Brien] made on the minds of all the people, that no attempt was made upon her honour, nor was she robbed of her clothes or jewels. Newenhams picture was exhibited at the Royal Academy in 1854 under the title `Riche and rare were the gems she wore. It shows the young lady preparing for her journey, her jewel box on the table and her looking glass to the left  rather recalling The Lady of Shallot, beloved of contemporary pre-Raphaelite artists. An important work by a rare and under-appreciated Irish artist, illustrating an Irish subject, it invites further study on this forgotten contemporary of Maclise and again demonstrates the vitality of the Cork school.

This is the penultimate work exhibited by the artist at the Royal Academy, London.

With thanks to the Gorry Gallery, Dublin for their assistance in cataloguing this work.
Entries for this auction are closed. We are now inviting entries for our 30 November Important Irish Art Sale.
Whyte & Sons Auctioneers Limited, trading as Whyte's, hereinafter called "the auctioneer" exercises all reasonable care to ensure that all descriptions are reliable and accurate, and that each item is genuine unless the contrary is indicated. However, the descriptions are not intended to be, are not and are not to be taken to be, statements of fact or representations of fact in relation to the lot. They are statements of the opinion of the auctioneers, and attention is particularly drawn to clause 5 set out below. Comments and opinions, which may be found in or on lots as labels, notes, lists, catalogue prices, or any other means of expression, do not constitute part of lot descriptions and are not to be taken as such unless they are made or specifically verified by the auctioneers.