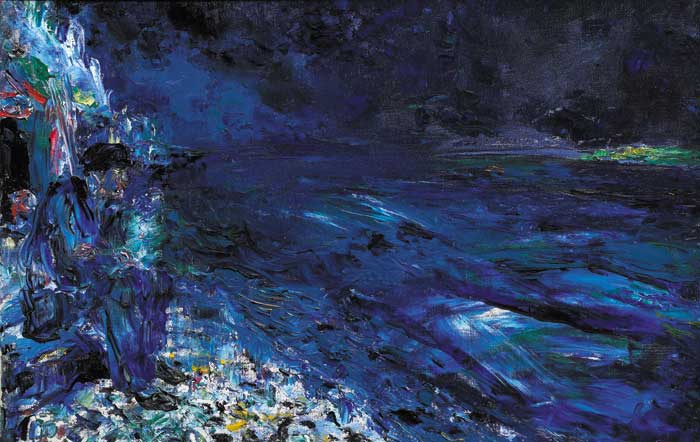 The mans black peaked hat and prominent moustache give him the appearance of earlier nautical figures by Yeats, such as his sailors and pilots. The latter, whom Yeats had known as a boy in Sligo, took on almost heroic proportion in his work. The pilot relied on his knowledge of the local terrain and of the dangers of the tides and currents to fulfil his important task of guiding ships in and out of the harbour. His skills were greatly valued particularly in a community which relied so heavily on the sea. Yeats, whose family were merchants and ship-owners, was well aware of the significance of the pilot and the experienced sailor to Irish life. But later such figures came to be associated with the free spirited travellers who peopled so many of Yeatss paintings. In this context the sailor was depicted as an unconventional, romantic figure who understood the power of the natural world and was able to survive within it.

Similar figures to the one depicted here recur in Early Afloat, (private collection, 1947), where the sailor is shown walking with his oars towards a boat, and in the much earlier, On a Western Quay, Sligo, (private collection, 1923). In River Mouth, the dramatic lighting, coming from the lower left hand corner of the composition, spotlights the man and his strange, nomadic surroundings. He sits outside a shack and the two handles of his oars are clearly visible behind him.

The theme of the river recurs in many of Yeatss oil paintings, a large group of them dating, like this example, to the mid 1940s. The fast flowing river was used by Yeats in both his painting and his writing as a metaphor for the power of the natural world, and by extension, for life itself. When watched by the human figure, the river becomes a symbol of universality and timelessness as opposed to the ego of the individual. Such a contemplation of the natural world represented a vital communion between the individual and the more enduring forces of nature. Yeatss father, John Butler Yeats, remembered how Jack always regretted not spending more time looking over the bridge into the river in Sligo, as a young boy.1 He clearly felt that such an activity was not wasting time but was a way of connecting to the earth itself. As an old man, as Yeats was when he painted this work, the metaphor was even more poignant.

The complete sale is on view at the RDS 26-28 April 10am-6pm
Catalogue: On line at whytes.ie or by post at 15
Whyte & Sons Auctioneers Limited, trading as Whyte's, hereinafter called "the auctioneer" exercises all reasonable care to ensure that all descriptions are reliable and accurate, and that each item is genuine unless the contrary is indicated. However, the descriptions are not intended to be, are not and are not to be taken to be, statements of fact or representations of fact in relation to the lot. They are statements of the opinion of the auctioneers, and attention is particularly drawn to clause 5 set out below. Comments and opinions, which may be found in or on lots as labels, notes, lists, catalogue prices, or any other means of expression, do not constitute part of lot descriptions and are not to be taken as such unless they are made or specifically verified by the auctioneers.