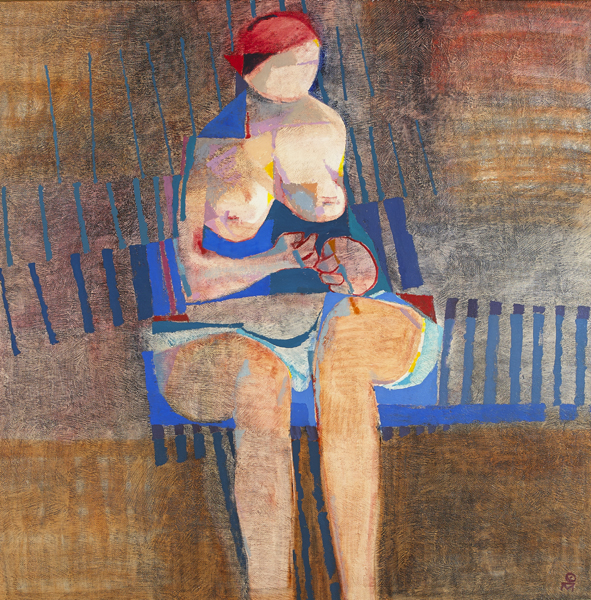 Showing Lot 68 of 229 Lot 66 - HOME WITH THE CATCH View Full Listing Lot 68 - OISÍN OF THE BIRDS, c.1950s
Estimate: €25,000 - €35,000
Price Realised: €25,000
Signature: signed in monogram lower right; signed again on reverse and inscribed with title [Seated Figure: 6.72]; with inscribed Arts Council of Northern Ireland label on reverse; also with [1985] Studio stamp on reverse
Medium: oil on gesso-prepared board
Size: 36 by 36in., 90 by 90cm.
Provenance: Collection of the artist;
Exhibited: 'Colin Middleton', David Hendriks Gallery, Dublin, January to February 1973, catalogue no. 3;
Seated Figure 6.72
Seated Figure 6.72
Catalogue on-line now.
Whyte & Sons Auctioneers Limited, trading as Whyte's, hereinafter called "the auctioneer" exercises all reasonable care to ensure that all descriptions are reliable and accurate, and that each item is genuine unless the contrary is indicated. However, the descriptions are not intended to be, are not and are not to be taken to be, statements of fact or representations of fact in relation to the lot. They are statements of the opinion of the auctioneers, and attention is particularly drawn to clause 5 set out below. Comments and opinions, which may be found in or on lots as labels, notes, lists, catalogue prices, or any other means of expression, do not constitute part of lot descriptions and are not to be taken as such unless they are made or specifically verified by the auctioneers.