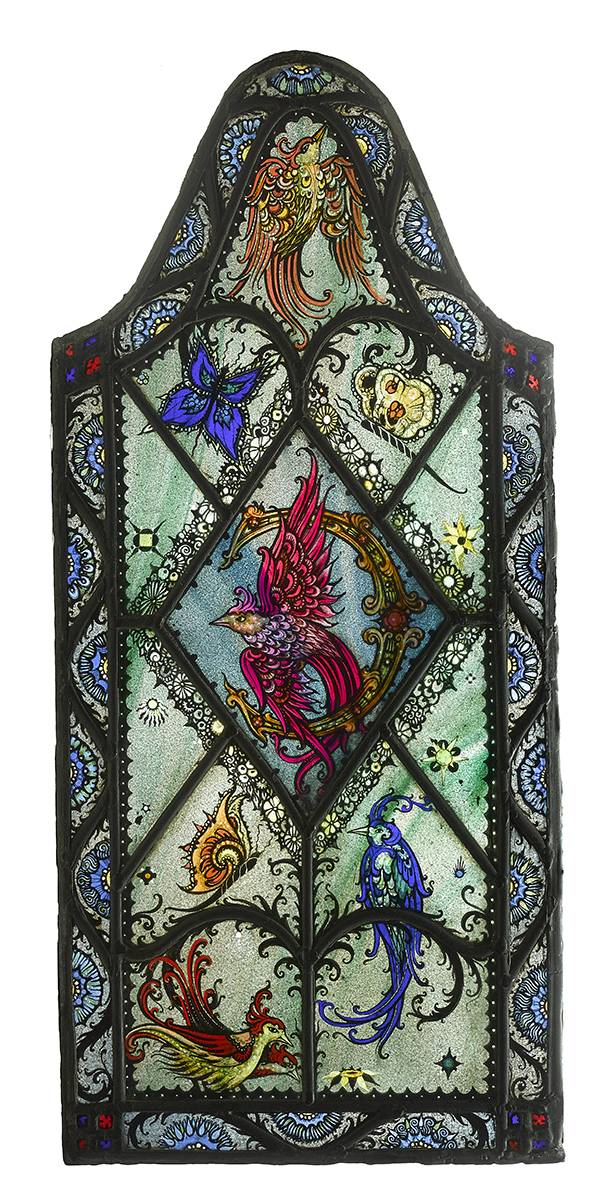 'The black leafy tendrils disguising the leads- a device already seen in the
decorative lunettes above The Eve of St Agnes window - are interspersed
with exotic birds, butterflies, flowers and marine creatures acided against
a lightly painted clear background as though suspended in a parchment
solution. The black lacy borders punctuated with small beads of colour
are echoed in the two decorative windows overlooking Swan Alley.'6


Some (although not necessarily all) of the elements noted here are also applicable to the door panel. The large C in the centre of the panel signifies the name Cassidy. The panel which is beautiful, shows the design, decoration and wonderful colour sense of the Clarke Studio artists.

Information and correspondence from the Harry Clarke MSS TCD MS 6060, 6010 and 6017 and colour sketch TCD MS11182-605 in Manuscripts and Archives, Trinity College Library are kindly cited and reproduced courtesy of the Board of Trinity College Dublin.
We are grateful to Ken and Muriel Ryan of The Abbey Stained Glass Studios, for their kind assistance and advice concerning this piece.
Following on from the successes of 2018, the best results since 2007 - where selling rates exceeded 80% in the majority of the art sales and some record prices were achieved - Whytes spring auction of Irish & International art promises to deliver another exciting opportunity for collectors to acquire rare artworks of enduring value. Some of the highlights already consigned include a beautiful oil by Margaret Clarke (illustrated), a rare and exquisitely designed piece of stained-glass from the workshop of the Master in the medium, Harry Clarke, a 1950s oil by Norah McGuinness and a sizeable oil by Jack B. Yeats. Among the other names also secured are Camille Souter, Evie Hone, Seán Keating, Roderic OConor, Gerard Dillon, Louis le Brocquy, Kenneth Webb and many others.

Catalogue will be published on our website on 8 February.