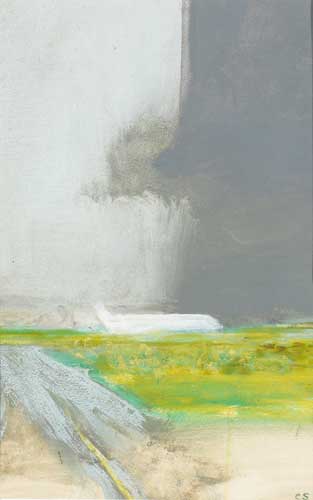 The level of attention Souter subsequently directed towards airports and flying is unique in the history of Irish art. Indeed, it is difficult to think of many artists internationally that have devoted so much energy to the subject either. It may, however, be true to say that her fascination has an ancestry in nineteenth century Romantic painting, though this does not seem to have ever crossed the artists mind. Like Souter, many Romantic painters were drawn to locations associated with travel, most notably harbours and docks  points of perpetual arrival and departure. In such places it is easy to imagine an exciting escape from ones day-to-day routine. J. M. W. Turner is said to have had himself lashed to the mast of a boat at sea so that he could observe a storm. Not satisfied with simply watching aeroplanes, Souter herself took flying lessons and painted a series of views from the air. I felt so proud that I could fly she once remarked, they called me Biggles. Indeed, with her scarf and beret, she must have looked the part. Visually, it was wonderful. Because of a lack of money, it was [the lessons were] so precious; I only wanted to fly in bad weather. I wanted to see the landscape in bad weather, she recalled.

Evidently, the weather was not just a peripheral interest of the series but was often central to it. This applies both to those paintings based on views from the air and those from the ground. Storm at Shannon falls into the latter category of work. A white plane charges down the runway on a collision course towards an approaching front like a bull to a red rag. It has already gored half way into a sheet of dark grey cloud, propelled forward by the near irresistible force of its own momentum and relative mass. As Alain de Botton has pointed out, the ability of aircraft to defy gravity (and or the weather) and ascend skyward may lead us to contemplate a similar dramatic transformation of our own circumstances.1 The converse is also true. Their ability to land and bring us home to the safety and security of what we know best can be comforting. Seemingly insurmountable forces and unknown dangers can be overcome.

Garrett Cormican
This auction is an exceptional opportunity for the discerning collector. We have gathered together from private collectors and estates superb works by Roderic OConor, Jack B. Yeats, Percy French, William Conor, Frank McKelvey, Paul Henry, Harry Kernoff, Evie Hone, Mary Swanzy, Colin Middleton, Gerard Dillon, Louis le Brocquy, Camille Souter and many other great Irish artists
Whyte & Sons Auctioneers Limited, trading as Whyte's, hereinafter called "the auctioneer" exercises all reasonable care to ensure that all descriptions are reliable and accurate, and that each item is genuine unless the contrary is indicated. However, the descriptions are not intended to be, are not and are not to be taken to be, statements of fact or representations of fact in relation to the lot. They are statements of the opinion of the auctioneers, and attention is particularly drawn to clause 5 set out below. Comments and opinions, which may be found in or on lots as labels, notes, lists, catalogue prices, or any other means of expression, do not constitute part of lot descriptions and are not to be taken as such unless they are made or specifically verified by the auctioneers.