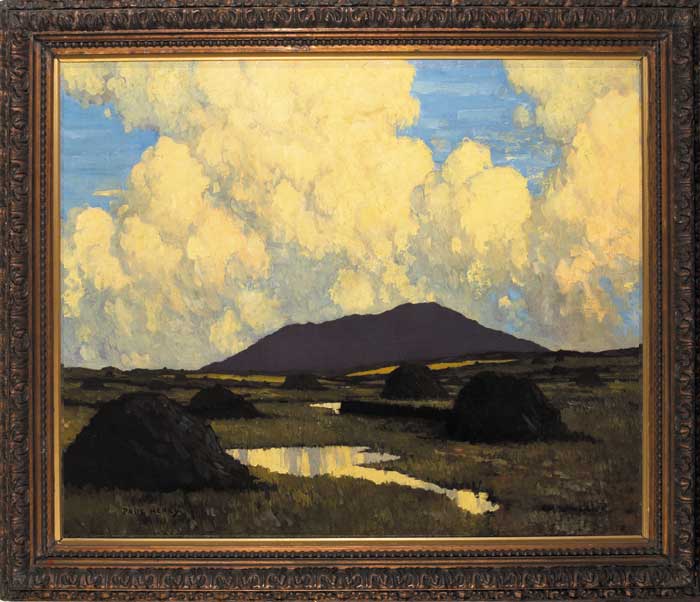 At any rate, The Bog at Evening shows Henry at the height of his powers. There is an absence of all human activity, his attention is focused firmly on the landscape and his handling of paint and treatment of the scene have become slightly codified, with a suffuse sense of stillness, even of timelessness  in this respect compare, for example, his In the West of Ireland (National Gallery of Ireland), which also dates from the 1920s  in a manner that typifies much of his oeuvre hereafter. Although one cannot be certain, the setting is most probably Connemara, and may be Achill Island.
The size of the composition is unusual for Henry, as is the degree of impasto employed throughout, but these elements serve to illustrate the confidence and vigour of the artists early years in Dublin. The handling of colour is particularly subtle, the pinks and warm creams in the cloud formations contrasting with the cooler cobalt blues elsewhere in the sky, while the juxtaposition of the purple mountains and the yellow cornfield in the middle distance is distinctly Post-Impressionist in concept and recalls the artists time in Paris. The foreground, too, despite the predominance of the umbers, browns and blacks of the soft earth, is a myriad of pinks and other hues and the reflections in the foreground pool lead the eye back into the composition and ultimately to the splendour of the sky. A label on the reverse of the frame notes: Museum of Fine Arts, Boston, T. L. 3682, H. L. Shattuck. The Bog at Evening is numbered 591 in S. B. Kennedys forthcoming catalogue of Paul Henrys oeuvre.

S. B. Kennedy
Seaforde, January 2007
NOTE: This auction and all future Whyte's art sales at the RDS will be on Monday evenings and not Tuesdays as heretofore.
Whyte & Sons Auctioneers Limited, trading as Whyte's, hereinafter called "the auctioneer" exercises all reasonable care to ensure that all descriptions are reliable and accurate, and that each item is genuine unless the contrary is indicated. However, the descriptions are not intended to be, are not and are not to be taken to be, statements of fact or representations of fact in relation to the lot. They are statements of the opinion of the auctioneers, and attention is particularly drawn to clause 5 set out below. Comments and opinions, which may be found in or on lots as labels, notes, lists, catalogue prices, or any other means of expression, do not constitute part of lot descriptions and are not to be taken as such unless they are made or specifically verified by the auctioneers.