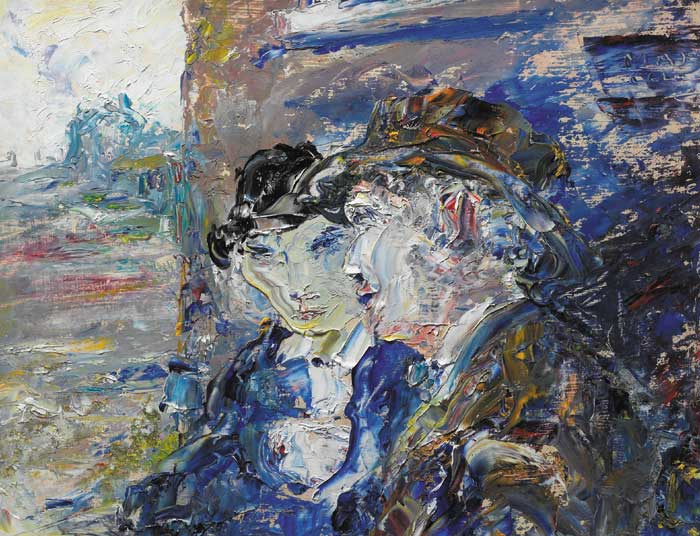 Bruce Arnold, author of Jack Yeats (Yale University Press 1998) writes: For a late work The Comforter has a powerful simplicity, rich colour and assured composition. The thought behind it, a narrative of kindness offered and comfort taken from it, binds the central figures together. Both of them, though particularly the woman, are given clear characterisation, not always so successfully done by Yeats, whose technique, so full of the flamboyant use of impasto, created at times a riot rather than a resolution of event. Here, the emphasis that he sought and has achieved is one of calmness and consideration. The full-face presentation of the woman is unequivocal, though whatever grief she is holding to her heart is under a measure of control that makes the comforters role that much more difficult.

Yeats had three years to go, and some fabulous works to paint; yet few in the last cycle of his output have the determination of thought and intent, as well as the control, achieved here.

Bruce Arnold,
Dublin, October 2005
The Irish Art Sale of the year! A fantastic array of works by Irish masters such as Sarah Purser, John Lavery, William Orpen, Jack B. Yeats, George Russell, Seán Keating, Harry Kernoff, Gerard Dillon, George Campbell, Louis le Brocquy and many more.
Whyte & Sons Auctioneers Limited, trading as Whyte's, hereinafter called "the auctioneer" exercises all reasonable care to ensure that all descriptions are reliable and accurate, and that each item is genuine unless the contrary is indicated. However, the descriptions are not intended to be, are not and are not to be taken to be, statements of fact or representations of fact in relation to the lot. They are statements of the opinion of the auctioneers, and attention is particularly drawn to clause 5 set out below. Comments and opinions, which may be found in or on lots as labels, notes, lists, catalogue prices, or any other means of expression, do not constitute part of lot descriptions and are not to be taken as such unless they are made or specifically verified by the auctioneers.