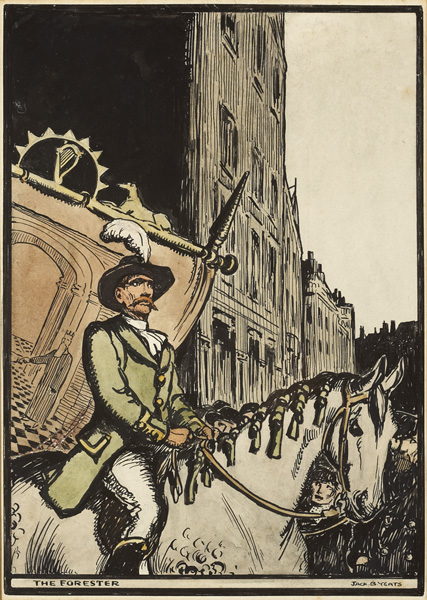 The earlier work "depicts the 1905 annual reunion in Sligo of the local branch of the Irish National Foresters, which included nearly all the prominent members of the Catholic and Nationalist Party in the locality. The wearing of sashes denotes their close affiliation with the Ancient Order of Hibernians, a Catholic organisation akin to Orangeism in its intensity, from whom the Foresters had originally separated, and who had recently been released from a clerical ban.

The meeting [illustrated in A Political Meeting, County Sligo, 1905] on 11 February 1905, was the occasion of the Lily of Lough Gill Branch of the INF welcoming of the Lord Mayor of Dublin - the General Secretary of the Irish National Foresters Association in Ireland and the only surviving member of those who had initiated the order in Ireland - to their reunion. The event began with a torchlight procession to the Imperial Hotel, where he spent the night, followed the next day by a meeting at Sligo Town Hall, where he addressed the branch on the evils of emigration. "

Yeats was in London in February 1905 and Pyle notes he must have recorded the scene from photographs. Pyle continues, "For Yeats the Robert Emmet banners [seen in the 1905 work] with the Irish harp were redolent of the 1898 procession and celebrations in Sligo, which had awakened his own national consciousness. In a letter to John Quinn (5 April 1909, New York Public Library) who had bought the picture as soon as it was exhibited, Yeats said he regarded A Political Meeting as one of the best works he had done."

The present work dates to 1913 and may have been based on the earlier 1905 watercolour which the artist was clearly pleased with. Yeats regularly revisited his sketchbooks and drawings throughout his career basing many of his later more abstracted canvases on scenes recorded several years previous.