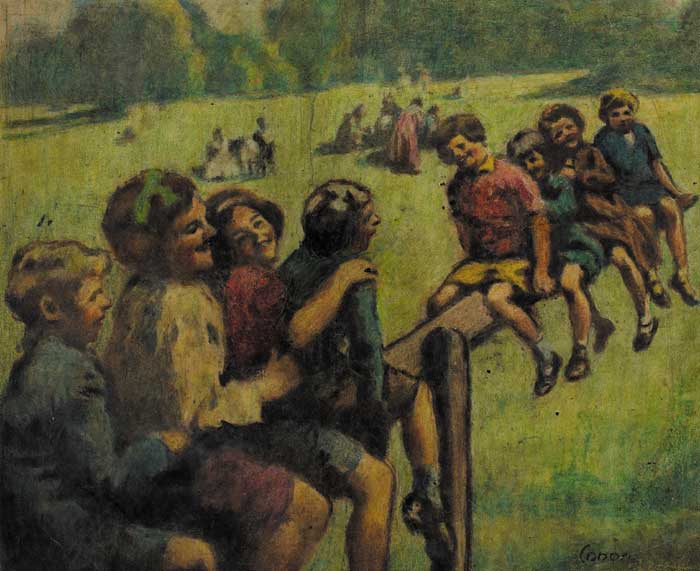 The carefree, excited play of children on a see-saw on a bright summers day can be seen as a kind of pictorial antidote to some of the harsher realities  illness, physical work, penury and unemployment  of life in working-class Belfast in the 1920s and 1930s, and a counterpoint to the daily toils of artisans and the lower middle-class. Significantly, and not
withstanding the complexity of Conors identity, these pictures, including those of children at play, transcend the sectarianism that had crept with increasing virulence into Belfast from the late nineteenth century onwards. Conor delighted in depicting recreational activities, from music and games to singing, dancing, visits to the beach, theatre and even polo. Other works, including Lamp-post Swinging and Queue for the Picture House (both in the collection of the Ulster Folk and Transport Museum) echo the cheeriness communicated in The See-Saw, and reflect the artists fascination with the collective nature of childrens recreation. His ability to communicate glee and good-humour was unsurpassed. Nor was it one-dimensional. He could capture with equal alacrity the jovial confidence of an army recruit, the celebratory air of a wedding party, or the giddiness of a dancing couple.

A study for this work was exhibited at the Oriel Gallerys William Conor Centenary Exhibition, 8-22 July 1981, catalogue no. 9 (illustrated).
This auction is an exceptional opportunity for the discerning collector. We have gathered together from private collectors and estates superb works by Roderic OConor, Jack B. Yeats, Percy French, William Conor, Frank McKelvey, Paul Henry, Harry Kernoff, Evie Hone, Mary Swanzy, Colin Middleton, Gerard Dillon, Louis le Brocquy, Camille Souter and many other great Irish artists
Whyte & Sons Auctioneers Limited, trading as Whyte's, hereinafter called "the auctioneer" exercises all reasonable care to ensure that all descriptions are reliable and accurate, and that each item is genuine unless the contrary is indicated. However, the descriptions are not intended to be, are not and are not to be taken to be, statements of fact or representations of fact in relation to the lot. They are statements of the opinion of the auctioneers, and attention is particularly drawn to clause 5 set out below. Comments and opinions, which may be found in or on lots as labels, notes, lists, catalogue prices, or any other means of expression, do not constitute part of lot descriptions and are not to be taken as such unless they are made or specifically verified by the auctioneers.