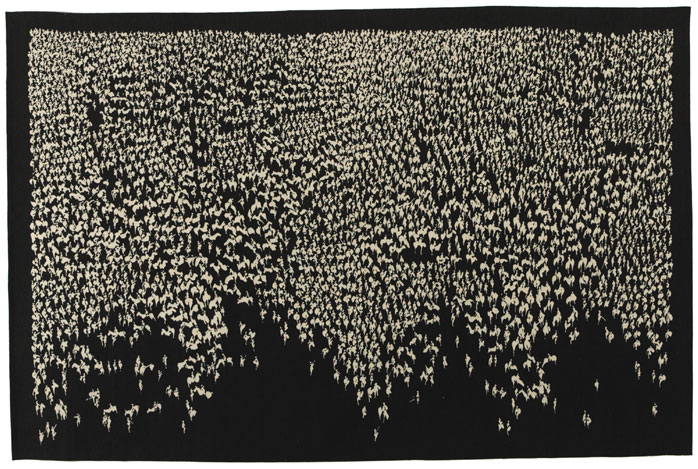 Showing Lot 47 of 211 Lot 46 - BEING, 1998 View Full Listing Lot 48 - THE TÁIN. THE BULL OF CUAILNGE, 1969
Estimate: €250,000 - €300,000
Price Realised: €245,000
Signature: signed with initials in the weave on reverse by maître-lissier, René Duché and numbered lower right; with certificate of authenticity sewn on reverse, signed, numbered, titled and dated by le Brocquy and Duché
Medium: Aubusson tapestry; Atelier René Duché (each no. 4 from an edition of 9)
Size: 72.5 by 110in., 184.15 by 279.4cm.
Provenance: Agnew's, London;
Where purchased by the current owner
Exhibited: 'Louis le Brocquy Aubusson Tapestries', Agnew's, London, 3-29 May 2001, The Táin Tapestries
Louis le Brocquy was living in France with his young family when he received a life-changing invitation, in December 1966. Publisher Liam Miller wanted him to collaborate with him on a new translation of Ireland's oldest saga written by Thomas Kinsel...Read more
Louis le Brocquy was living in France with his young family when he received a life-changing invitation, in December 1966. Publisher Liam Miller wanted him to collaborate with him on a new translation of Ireland's oldest saga written by Thomas Kinsella. Le Brocquy penned an enthusiastic affirmative that Christmas Eve and spent much of the next three years visualising An Táin Bó Cúailgne. In September 1969, Dolmen Press published it as The Táin.
The Táin was born of some eighty stories about the Ulaidh, a prehistoric people who lived in the north and north-western regions of what is now called Ireland. Part epic, part soap opera, the tales were vivid, vicious, inconsistent and often rather rude. Oral versions survived for long enough to be collected by scribes, whose fragmentary manuscripts are now in Trinity College and the Royal Irish Academy. Translators and writers such as Lady Gregory and W.B. Yeats had retold some of the Cúchulainn tales - and Joyce's Finnegans Wake drew on its meandering style - but Thomas Kinsella's Táin was the first widely-accessible version, especially when Oxford University Press' 1970 paperback followed the de luxe and limited editions produced by Dolmen Press.
The Táin marked a unique cultural moment, for Ireland and the world. The State had just celebrated the 50th anniversary of the 1916 Rising and was driving ahead with Seán Lemass' Second Programme for Economic Expansion. By 1969 when it was published, Northern Ireland was in conflict, and global events such as the Prague Spring, the assassinations of Martin Luther King and Robert Kennedy, as well as wars in Vietnam, Angola and elsewhere, underlined its themes of invasion and carnage. Meanwhile, The Beatles sang "All You Need is Love."
Its impact was instant. Although characters like Cúchulainn and Ferdia, Medb and Aillil, were local, Kinsella and le Brocquy translated them into a crisply contemporaneous style that resonated through the cultural hierarchy. It engaged lovers of art, language, music and Celtic studies, as well as popular culture. The Táin became an Irish Iliad, with Cúchulainn as a Superhero reincarnating to a new age of rock, cartoons and animation.
The images le Brocquy called 'shadows thrown by the text' became so iconic that it is almost impossible now to imagine The Táin differently. Yet no one had visualised the full saga previously and no artist from Ireland had engaged so thoroughly with pieces of writing in such a way. Le Brocquy made hundreds of drawings, many of which appear in the de luxe and limited editions, with a handful printed in the paperback and a precious twenty in these tapestries. Communication was difficult in those pre-digital days because he was in France and Miller was in Dublin, so that many key design decisions relied on sending letters through the post.
Le Brocquy's innovative, daring approach cast the saga as a virtual alphabet composed of spontaneous, inky letters. This shows immediately in Army Massing, where marks cascade in rivulets that resemble both chain mail and hand-writing, and in the H-shaped Cúchulainn confronting Ferdia. Different ages and cultures whisper through the images - and through these twenty tapestries made during 1998-2000, when le Brocquy collaborated with maître-lissier René Duché, whose firm had recently been awarded the honour Meilleur Ouvrier de France. Cuchulainn's Warp Spasm, for example, speaks both of calligraphic marks from Sun Tzu's The Art of War and Yves Klein's bodily-marked Anthropometries, as well as cave paintings traced by prehistoric peoples.
The translation into tapestry, via le Brocquy's Táin lithographs, crested on the momentum from oral to written traditions, from drama to poetry and from visual culture to music. Duché's subtly-textured cottons and wools freed le Brocquy's black-on-white marks into a textured, sensual material that illuminates the sense of a blot or stain without definite edges, which is what he wanted. Here, the statuesque shapes let le Brocquy grow the book's relatively modest scale into a life-affirming series of interconnected images that speak to each other like letters in a phrase or sentence. They belong together. The tapestries were last seen at the Irish Museum of Modern Art in 2003, when they were acquired under the Heritage Tax Scheme. It is profoundly moving to see them together in these weeks after the artist's passing on 25 April 2012. Le Brocquy's hand reaches out through them.

Medb Ruane
April 2012
ncluding a further selection from the Jim O'Driscoll Collection, a major corporate collection, the complete series of Louis le Brocquy's Táin tapestries, the James Cruickshank Collection of Grace Henry Paintings, and many other works of quality at realistic estimates, and THE LOWEST FEES TO BUYERS OF ANY OF THE MAJOR AUCTION HOUSES - an ideal opportunity for the discerning collector.
Whyte & Sons Auctioneers Limited, trading as Whyte's, hereinafter called "the auctioneer" exercises all reasonable care to ensure that all descriptions are reliable and accurate, and that each item is genuine unless the contrary is indicated. However, the descriptions are not intended to be, are not and are not to be taken to be, statements of fact or representations of fact in relation to the lot. They are statements of the opinion of the auctioneers, and attention is particularly drawn to clause 5 set out below. Comments and opinions, which may be found in or on lots as labels, notes, lists, catalogue prices, or any other means of expression, do not constitute part of lot descriptions and are not to be taken as such unless they are made or specifically verified by the auctioneers.