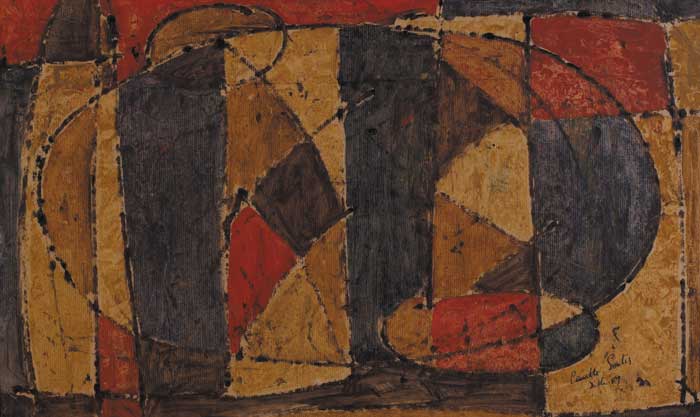 Camille Souters early paintings drew their influences from a variety of artists, most notably perhaps Paul Klee. Souter admired his economy of means, the way he would use just a few summary, calligraphic elements over a lightly textured background. The dot, the line, arrows and the written word would be used in an improvisational manner, almost like a Jazz musician improvising within the confines of a particular scale, to produce works of great precision and freshness. By extension of the analogy, Things Inside operates within a key comprised of patches of red, blue/violet, ochre and brown which are repeated in almost syncopated rhythm across the picture plane. These patches of colour in turn are demarcated by a grid-like pattern of broadly vertical lines and oval shapes. Space is indeterminate, shifting forward and backward in equal measure. The oval elements never allow the eye to settle in one place forcing the viewer to look, literally, around the picture.

It is worth noting that this painting has on occasion been exhibited under the title Figures in Embryo, for that is essentially what we are looking at. It is directly related to Souters pregnancy at the time. While there is a large oval line around the perimeter which may be suggestive of a womb, one should not look for anything too definite; a foetus, a head, a leg or a hand etc. The appropriately inchoate, anthropomorphic forms we find here evoke emergent life, rather than a fully developed human being. They do not attempt to illustrate Souters pregnancy in a mimetic way, to show you what a pregnant woman or a foetus looks like, so much as recreate the feeling of being pregnant.

Garrett Cormican
© April 2007
Whyte & Sons Auctioneers Limited, trading as Whyte's, hereinafter called "the auctioneer" exercises all reasonable care to ensure that all descriptions are reliable and accurate, and that each item is genuine unless the contrary is indicated. However, the descriptions are not intended to be, are not and are not to be taken to be, statements of fact or representations of fact in relation to the lot. They are statements of the opinion of the auctioneers, and attention is particularly drawn to clause 5 set out below. Comments and opinions, which may be found in or on lots as labels, notes, lists, catalogue prices, or any other means of expression, do not constitute part of lot descriptions and are not to be taken as such unless they are made or specifically verified by the auctioneers.