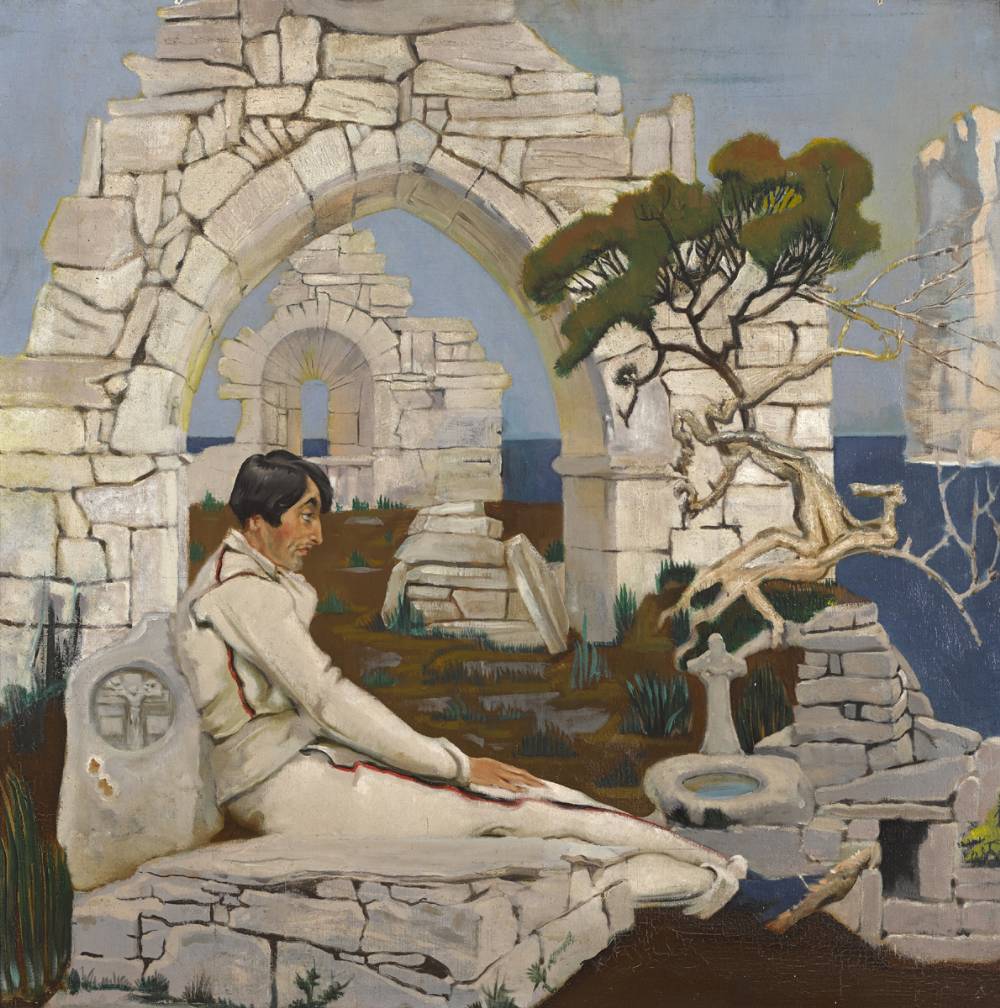 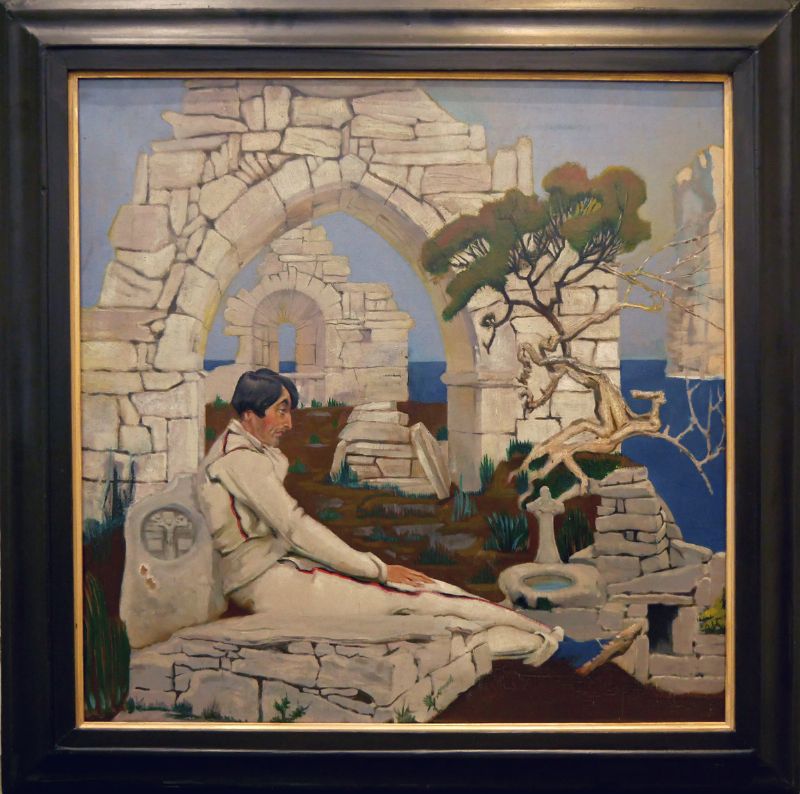 Yet Thinking out Gobnait is not simply an image of Clarke thinking about his work. It is an allegory drawn from a composite of the picturesque ruins of the ancient churches of Inis Oírr, and influenced in style by William Orpen's The Holy Well (1916: NGI). The painting shows Clarke sitting on a grave slab within the ruins of Teampall Chaomháin (St Kevin's church) on Inis Oírr, along with a holy water font at his feet, and a holy well to the bottom right of the image. The tree, known as the 'tree of Inisheer', had always been associated with St Gobnait and her church on the island Cill Ghobnait. Keating simply removed the tree from its original place and positioned it by Teampall Chaomháin, thereby introducing a simultaneous visual reference to Clarke's commission. But it is the depiction of Clarke on the grave slab in Teampall Chaomháin that denotes the crucial, though symbolic emphasis in Keating's portrayal of his friend. The church is traditionally associated with miraculous cures; those who lay on the grave slab were, apparently, healed. Clarke had not been well while 'thinking out Gobnait', and Keating suggests, perhaps, that all might be alright now that his friend had reclined on the miraculous grave slab. An inscription in old Irish and another in English on the reverse of the work, both in Keating's hand, reveal that he gifted the painting to Clarke in 1917. Anxious to be elected to the RHA, Keating borrowed the painting from Clarke to exhibit in the annual exhibition in 1918. He was elected an Associate of the Academy later that year.

Dr Éimear O'Connor HRHA
Research Associate, Humanities Institute, UCD
August 2018
Yet another very successful Whytes auction with 80% of lots sold for a total of 1.6 million. Some of the many highlights were lot 15, Jack Yeats Pilot Sligo River at 370,000, lot 59 Patrick Heron Bedroom Mousehole at 125,000, lot 32 Paul Henry Evening Silence and Peace County Mayo at 80,000, lot 26, Seán Keating Thinking Out Gobnet, 56,000, and lot 14A Walter Osborne Rush and Lusk, 40,000.
Prices given below exclude buyers commission and VAT. Unsold lots are available at reserve prices
Whyte & Sons Auctioneers Limited, trading as Whyte's, hereinafter called "the auctioneer" exercises all reasonable care to ensure that all descriptions are reliable and accurate, and that each item is genuine unless the contrary is indicated. However, the descriptions are not intended to be, are not and are not to be taken to be, statements of fact or representations of fact in relation to the lot. They are statements of the opinion of the auctioneers, and attention is particularly drawn to clause 5 set out below. Comments and opinions, which may be found in or on lots as labels, notes, lists, catalogue prices, or any other means of expression, do not constitute part of lot descriptions and are not to be taken as such unless they are made or specifically verified by the auctioneers.