When the hammer fell at €420,000 for a Paul Henry in Whyte’s 19 October sale it broke the auction record for that artist. Other astounding prices were achieved in autumn; testament to a buoyant art market entirely undeterred by the pandemic and restrictions on attending auctions in person. These successes have prompted some collectors to part with their most treasured pieces which otherwise may have remained unseen for years. Their appearance now on 7 December will not be lost on discerning collectors who realise the unique opportunity Whyte’s forthcoming auction affords.

On Monday 7 December 2020 136 lots of exceptional Irish art will be offered for auction in Whyte’s ‘virtual sale’ in Dublin. Absentee bidding, online live bidding and telephone bidding will be available. Like the autumn auction, due to Government restrictions, there will be no room bidding. Viewing by strict appointment will take place at Whyte’s offices from 1 to 7 December. 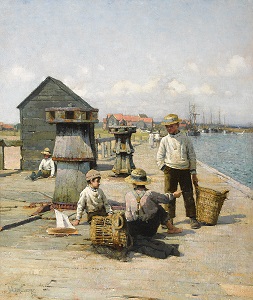 The top lot by value is a luminous oil by Irish Impressionist Walter Osborne, A Tale of The Sea, 1885 (lot 41, €300,000-€400,000) (detail illustrated). Exhibited at the RHA, Dublin in 1885, it depicts a group of young boys gathered on a pier at Walberswick, an artistic hub on the Suffolk coast. A masterful example, the picture was praised in contemporary reviews of the time. The National Gallery holds in their collection a newspaper cutting relating to this painting, the first publication to feature a work by Rathmines born Osborne. A similar sized work holds the 2001 world record at IR£650,000 (€825,000 approx.). 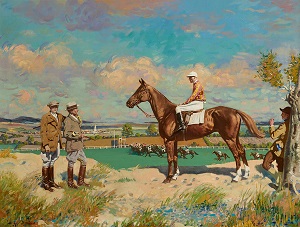 The mischief and mastery of Stillorgan born Sir William Orpen can be found in Sergeant Murphy and Things; Mr Stephen Sanford’s Sergeant Murphy With Captain ‘Tuppy’ Bennett and The Trainer George Blackwell, c.1923 (lot 44, €250,000-€350,000) the artist’s first and highly successful foray into the genre of sporting art. It featured in London’s Royal Academy 1924 annual exhibition where it was compared favourably with hitherto unsurpassed equestrian master Sir Alfred James Munnings. It depicts perhaps the most popular Aintree performer who beat a large field in 9 minutes 36 seconds. Only 6 from 28 starters finished and it was the first ever Grand National win for an American owner. This painting was due to be shown at the National Gallery of Ireland in the exhibition ‘Irish Horse’ - intended for April to December 2020 but cancelled due to Covid-19.
Herein lies a unique opportunity for equestrian fans to acquire a tour-de-force work hallmarked for its importance in both the history of art and racing. 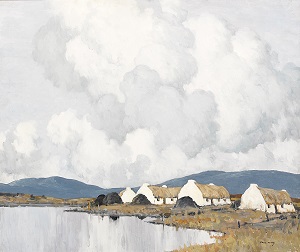 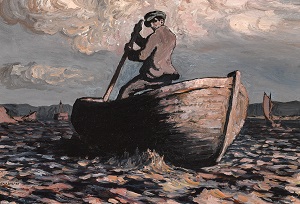 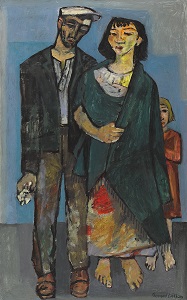 Gerard Dillon, like Yeats, le Brocquy and Reid, was inspired by the life and culture of Irish Travellers. He embraced the romantic nationalist vision of an authentic, unspoilt Ireland and considered Travellers to be more authentically Irish and less “contaminated” by the influence of British rule. The Tinker Family, 1957 (lot 60, €80,000-€120,000 illustrated) was shown in 1957 at the annual Irish Exhibition of Living Artists (IELA) where avant-garde Irish art was showcased from 1943 until the 1970s. Sensitively painted, this endearing work has never before been seen at auction and is sure to charm bidders keen on this pivotal period in Irish Modernism.  Recent record results for Dillon would indicate that the auctioneer’s estimate is conservative.
Another IELA exhibit can be found in Daniel O’Neill’s Girl with Hoop (lot 62, €18,000-€25,000) shown there in 1955. This work also travelled to Waddington’s Galleries in Toronto but later returned to its country of origin in the 1990s where it has remained since. Two other oils by O’Neill – each guiding €15,000-€20,000 – include a Renoir-esque Dinner in the Garden, lot 65 and an evocative Head of Young Woman, lot 64.

Dillon and O’Neill’s contemporary and fellow ‘Belfast boy’ Colin Middleton is represented with a stunning Surrealist work lot 66, The Queen of Spain’s Daughter, 1972-74 [Wilderness Series No. 28] €30,000-€50,000. In the 1970s Colin and Kate Middleton paid a number of visits to Barcelona to see their daughter Jane, and references to Spain, its landscape, lifestyle and customs and history permeate his work of that decade.
Although born in Derry, Norah McGuinness spent most of her life and career in Dublin. Lots 69 to 72 offer wonderful examples from different strands of her oeuvre which demonstrate her unique adoption of Cubist and Fauvist styles absorbed on the Continent. The top lot by value is an oil lot 69 Bog Farm, €20,000-€30,000 followed by a Wicklow scene, Ochre Mines, Avoca (lot 71, €15,000-€20,000) with works on paper from €1,500 to €8,000.

Séamus Heaney’s words are particularly apt when, in an essay on Louis le Brocquy’s head images, the poet concluded with reference to: ‘… an image that has seized hold of the eye and will not let it go.’ This is certainly true of his Image of Picasso, 1983 (lot 87, €150,000-€200,000); the highlight of Whyte’s contemporary offerings and catalogue front cover. le Brocquy was an admirer of Picasso. Like him, he lived for many years in the south of France and was familiar both with Picasso’s work and his seminal significance in the development of Modern art internationally. Its size is as impressive as its subject, measuring 47 by 47ins inclusive of the frame; this oil on canvas will make a bold statement on any bidder’s wall.

Prospective buyers will find everything they might need to know about a lot on Whyte’s online catalogue including high resolution images, interior shots of each artwork, condition reports, frame sizes, images of the reverse of the artworks and the Art Visualiser App which allows buyers to visualise the artworks on their own walls at home. For those cocooning or unable to view by appointment, a virtual tour of the exhibition will be available on the website. Whyte’s staff will, as always, be on hand to discuss by phone or facetime any queries clients might have. And, as another reassurance for absentee bidders Whyte’s, uniquely, offers a guarantee and certificate of authenticity for every work sold at its auctions.

Viewing
All the artworks are on display with full descriptions and several with insightful notes from art experts at www.whytes.ie
This fabulous auction will be on view by appointment at Whyte’s offices from 1 December to 7 December 10am to 5pm Monday to Friday, Saturday and Sunday 2pm to 6pm.

This ‘virtual auction’ will be broadcast live on the internet at bid.whytes.ie, invaluable.com, auctionzip.com, encheres.lefigaro.fr; collectors around the world can bid live from their computers, smart TV’s, mobile phones or android devices. Whyte’s is the only Irish auction house that continues to offer this service free of extra fees.
This website uses cookies. By using the site, you consent to the use of cookies in line with our privacy policy. Find out more OK, I understand