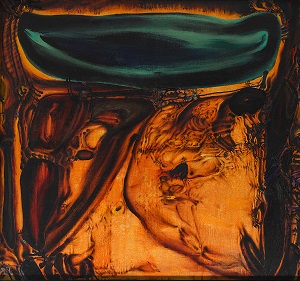 On March 9 Whyte’s held its first major art auction of the year, just as the pandemic took effect in Ireland. That weekend the government imposed the first set of restrictions including a limit of 100 people at indoor events. The auction room at the RDS was packed and nearly exceeded that limit. The sale was extremely successful and grossed €1.2 million for 85% of the lots offered. Unusually the highest result was for a Polish artist, Tadeusz Brzozowski (1918-1987) whose painting MASTIFF (CWAJNOS), 1967, fetched €190,000 plus fees from a collector in Poland. Of course there was an Irish connection – the painting had been exhibited at ROSC in 1967 after which it was purchased by an Irish collector.

A week later the first lockdown was imposed and all businesses closed their doors until June. However, Whyte’s continued to service buyers and sellers by internet and telephone. Having been one of the first auction houses to have online bidding back in 1995 Whyte’s were well adept at doing business in cyberspace. On-line timed sales were organised for less valuable sales while “virtual” auctions which included telephone and absentee bidding as well as participation via various internet platforms throughout the world, hosted the higher ticket works.

In order to mitigate the fears of clients bidding “blind” Whyte’s provide, online, extra photographs including images to scale in a domestic setting and an app to project pictures to scale on walls. Whyte’s also publishes condition reports on-line and, very importantly, issues certificates of authenticity for every lot sold. 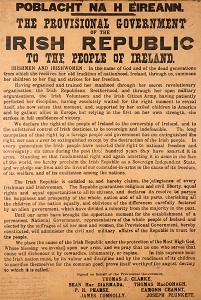 Collectors embraced the new forms of auction with alacrity and great enthusiasm, and prices, which were already showing much improvement in 2018-2019 were generously pushed upward with some aggressive online bidding. Whyte’s had postponed its annual and popular “Eclectic Collector” sale to 25 July, when relaxed restrictions allowed a room attendance of up to 50 masked bidders, socially spaced, in the appropriately historic surroundings of The Freemasons Hall. Among the highlights was a 1916 Proclamation of The Irish Republic which fetched €190,000, a Wolfe Tone archive split into a number of lots and which grossed over €70,000, a John McCormack archive which made €42,000 and that of William Plum Smith – well known Ulster Loyalist paramilitary and politician – sold for €16,000.

ANOTHER WORLD RECORD AT WHYTE’S 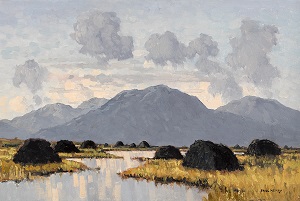 In the last few years Whyte’s have broken world records for many Irish artists. In 2019 the firm smashed price records for Jack Yeats, Mainie Jellett and May Guinness. On 19 October 2020 Whyte’s sold an outstanding Paul Henry painting, A Sunny Day Connemara, for a new world record of €420,000. This was a “virtual auction” with every type of buyer except room bidders due to the reintroduced restrictions. 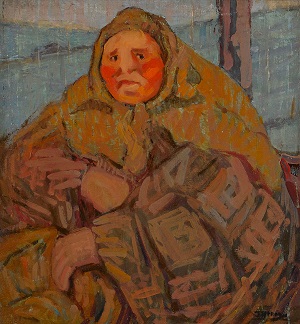 Whyte’s total sales amounted to €7 million for 2020, compared to €8.5 million for 2019. The increased demand for art and collectibles offset the worst of the effects of the pandemic. This demand was driven by savings made from not travelling abroad, not eating out, not drinking in pubs, not commuting and not buying clothes for work. Also the imposition of negative interest rates on bank deposits has encouraged cash rich individuals to purchase tangible assets such as art and collectibles.

2021 will be another challenging year with the continuance, for several months at least, of the pandemic restrictions, and the end of the UK’s membership of the EU. The latter will cause problems for trading in art between the EU and the UK. Individual collectors will have to pay 13.5% VAT on importation of art, and 21% on importation of collectibles from the UK. UK collectors and businesses will only pay 5% VAT on imports of art and most collectibles from Ireland. Irish VAT registered businesses will account for the importation VAT in their returns to Revenue. Customs clearance charges will add an extra 1% to the cost of importing art and collectibles. Thus a painting bought in the UK for €10,000 could cost an extra €1,450 to import to Ireland, and a €1,000 collectible will be charged €220 on arrival.

Whyte’s have three auctions planned for the first quarter of 2021 – Irish & International Art on 1 March, The Eclectic Collector on 27 March and Spring Art Sale on 13-19 April. Entries to these sales are sought by email – just send details and photographs to info@whytes.ie for a free appraisal.