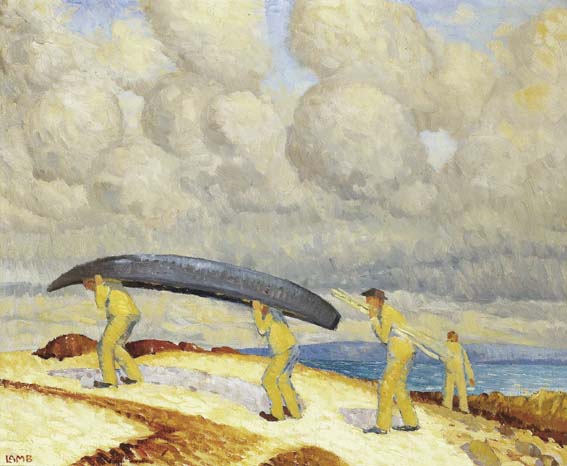 In 1923 he held his first one-man show at the Dublin Painters Gallery on St Stephens Green, where his work was well received. Reviewing a second exhibition the following year, fellow-artist George Atkinson discerned a fine feeling for the dramatic in nature and noted that Lamb had a control of design and arrangement that is unusual in landscape painters2. This strong sense of design, perhaps inherited from his painter-decorator father, was to distinguish his work throughout his career and elevate him to the ranks of Irelands best landscape artists, including Paul Henry, who had a similarly keen eye for form and design.

Connemara, in particular Carraroe continued to inspire him, as he sought to record a way of life that was rapidly disappearing. During the late 1940s and throughout the 1950s he painted a series of large paintings featuring fishermen and their light-weight currachs3: The Curragh Race (hung in the V&A museum in 1948 as part of an Olympiad Sport in Art exhibition), Tarring the Curragh (RHA, 1950), Curraghs and an Old Hooker (RHA, 1958) and Bringing in the Curragh (RHA, 1958), the last of which is believed to be the present work. Despite constant financial difficulties, Lamb set high prices to each of these works, indicating the importance he attached to them personally.

The painting remained in Lambs studio until after his death, and is almost certainly the work titled Carrying up the Curragh which was one of seven works exhibited in the artists memory at the RHA the year after his death (catalogue no. 56). It was not seen again until 1981, when it was included in an exhibition of Lambs work at the Stone Gallery in Spiddal, where it was purchased by the present owner.

1 Marie Bourke, introductory essay in the catalogue of Charles Lamb RHA: Galway Paintings, Galway Arts Centre, October 1998.
2 George Atkinson, Dublin Magazine, April 1924.
3 The spelling of currach was frequently Anglicized and misspelled as curragh; the original spelling, as used in the RHA exhibition catalogues, has been retained throughout.
Superb fully illustrated 160 page catalogue available by post at 12 (Ireland), £8.50 (Great Britain) 16 (Europe) or $25 elsewhere
Whyte & Sons Auctioneers Limited, trading as Whyte's, hereinafter called "the auctioneer" exercises all reasonable care to ensure that all descriptions are reliable and accurate, and that each item is genuine unless the contrary is indicated. However, the descriptions are not intended to be, are not and are not to be taken to be, statements of fact or representations of fact in relation to the lot. They are statements of the opinion of the auctioneers, and attention is particularly drawn to clause 5 set out below. Comments and opinions, which may be found in or on lots as labels, notes, lists, catalogue prices, or any other means of expression, do not constitute part of lot descriptions and are not to be taken as such unless they are made or specifically verified by the auctioneers.