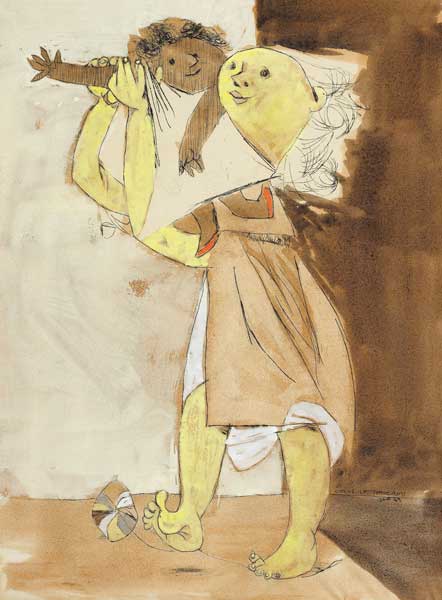 In form, the ragged toddler who trots along while embracing a smiling doll is reminiscent of the Traveller children who hang on their mothers skirts in paintings such as Tinkers Enter the City, 1947, and Tinkers Break Whitethorn, 1947. Yet in setting and theme Child with Doll presages many of the Grey Period works. Like A Family, Child in a Yard, 1953 (Dublin City Gallery: The Hugh Lane), and several of the other paintings that le Brocquy exhibited at the Venice Biennale in 1956, this image features a child whose humanity is contrasted with its stark surroundings. Dating from the post-war period when atomic catastrophe seemed a very real threat, these works combine the existential angst that dominated the work of le Brocquys friend, Francis Bacon, with a humanistic celebration of the innocence of youth.

Writing in 1950, James White suggested that the toddler in Child with Doll was based on the figure of a girl hugging a doll in The Fair at Bray Head, 1949. Arguing that from this moment the figure of the child took on a symbolic significance within le Brocquys imagination, White wrote that the child became ... charged with a meaning of its own as a symbol of the lost children of Europe, wandering through a cruel world with wonder and only half-understanding. When it was recreated as a separate work (Child with Doll), the doll remained with it, as a symbol of yet another future generation that these children carry with them. In short, the child with doll is a parable of recurrent life, springing up through the ruins as fireweed grows on the rubble of a bombed house.1

Le Brocquy has recalled how he heard of the horrors of the Holocaust first hand from his friend, the FrenchJewish art dealer Charles Gimpel. Both the Traveller series and the stark interiors of the Grey Period works have been related to the multitudes of refugees displaced during World War II and its aftermath. 2 The connections between Child with Doll and the horrors of war are strengthened by an inscription on the verso of the work which reads Homage á Jankel Adler.

Born in 1895 into an Orthodox Jewish community in Poland, Adler made his home in Germany until the rise of National Socialism forced him to flee, firstly to France, and then to London. Adler, whom le Brocquy met in London in 1947, soon became both a friend and an inspiration to the young Irish man. Despite the contrasts in their ages and backgrounds, these two artists from opposite ends of Europe combined a strong allegiance to their cultural roots with an appreciation of the international avant-garde. The influence of Picasso is particularly palpable in Adlers work and although le Brocquy knew his work first hand, in Child with Doll Picassos influence is filtered through the eyes of Adler. While Child with Doll does not appear to relate directly to a particular work by Adler, the subject of the wandering child of le Brocquys homage can be connected to the plight of Adlers family. All of Adlers sisters and brothers perished in the Holocaust, leaving only a niece and a nephew to join the orphans of Europe.

One of a series of works that resulted from the technical experiments that le Brocquy undertook while he was an instructor at the Central School of Arts & Crafts, London, Child with Doll combines watercolour with a line created by drawing onto tracing paper and then using carbon-coated paper to transfer the drawing onto the final page. The purpose of this technique was to sabotage the artists technical facility and thereby introduce an element of chance into his method. The resulting line  slightly blurred and lacking the confident mark-making of the artists unadulterated hand  increases the undercurrent of unease that pervades the image. In Child with Doll, le Brocquys experiments proved so successful that he later made a series of twenty lithographs based on the same theme.

Throughout his long and fruitful career, Louis le Brocquy has often acknowledged his artistic influences by creating homages to their work. While recent shows in Dublin and London included homages to Velaquez, Goya, Manet and Cezanne, Child with Doll is both one of his earliest homages and a transitional work that lies at an important crossroads between the Irish orbit of the Travellers and the international arena of the Grey Period.

The complete sale is on view at the RDS 26-28 April 10am-6pm
Catalogue: On line at whytes.ie or by post at 15
Whyte & Sons Auctioneers Limited, trading as Whyte's, hereinafter called "the auctioneer" exercises all reasonable care to ensure that all descriptions are reliable and accurate, and that each item is genuine unless the contrary is indicated. However, the descriptions are not intended to be, are not and are not to be taken to be, statements of fact or representations of fact in relation to the lot. They are statements of the opinion of the auctioneers, and attention is particularly drawn to clause 5 set out below. Comments and opinions, which may be found in or on lots as labels, notes, lists, catalogue prices, or any other means of expression, do not constitute part of lot descriptions and are not to be taken as such unless they are made or specifically verified by the auctioneers.