DAVY BYRNE'S FROM THE BAILEY, circa 1941 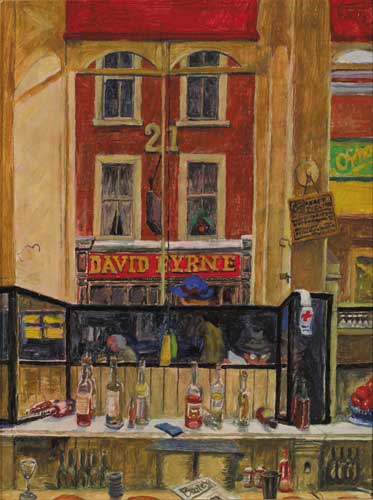 In all four works the façade of Davy Byrnes public house is viewed through the front window of the Bailey, a restaurant and bar on Duke Street, Dublin. Kernoff was a habitué of both establishments and painted several interiors of Davy Byrnes, including the well-known triple portrait of himself in the back snug with the proprietor and Martin Murphy, set-maker for the Gate Theatre. In the Bailey restaurant series, Kernoff likewise includes a portrait of himself: the figure in the trilby hat and glasses, reflected in the bar mirror. In the present example Kernoff is partially hidden behind the newspaper he is reading.

Both the larger oil and the two watercolours differ from the present work in a few other minor details: a second play-bill hangs from a hook to the left of the window (advertising the Gate Theatres production of Romeo and Juliet in two works, and an Abbey production of The Plough and the Stars in another), an extra figure is reflected in the bar mirror to the furthermost right of the composition, the potted plant in the first-floor window of Davy Byrnes has moved, the woman passing outside has donned a different hat and walks in the opposite direction. In essence however, the four compositions remain the same, each painting a detailed and lively picture of Dublins literary pub life.
Preview: many of the works in this sale may be viewed in our Molesworth Street galleries from February 6 to February 11, 9.30 to 5.30pm.
Whyte & Sons Auctioneers Limited, trading as Whyte's, hereinafter called "the auctioneer" exercises all reasonable care to ensure that all descriptions are reliable and accurate, and that each item is genuine unless the contrary is indicated. However, the descriptions are not intended to be, are not and are not to be taken to be, statements of fact or representations of fact in relation to the lot. They are statements of the opinion of the auctioneers, and attention is particularly drawn to clause 5 set out below. Comments and opinions, which may be found in or on lots as labels, notes, lists, catalogue prices, or any other means of expression, do not constitute part of lot descriptions and are not to be taken as such unless they are made or specifically verified by the auctioneers.