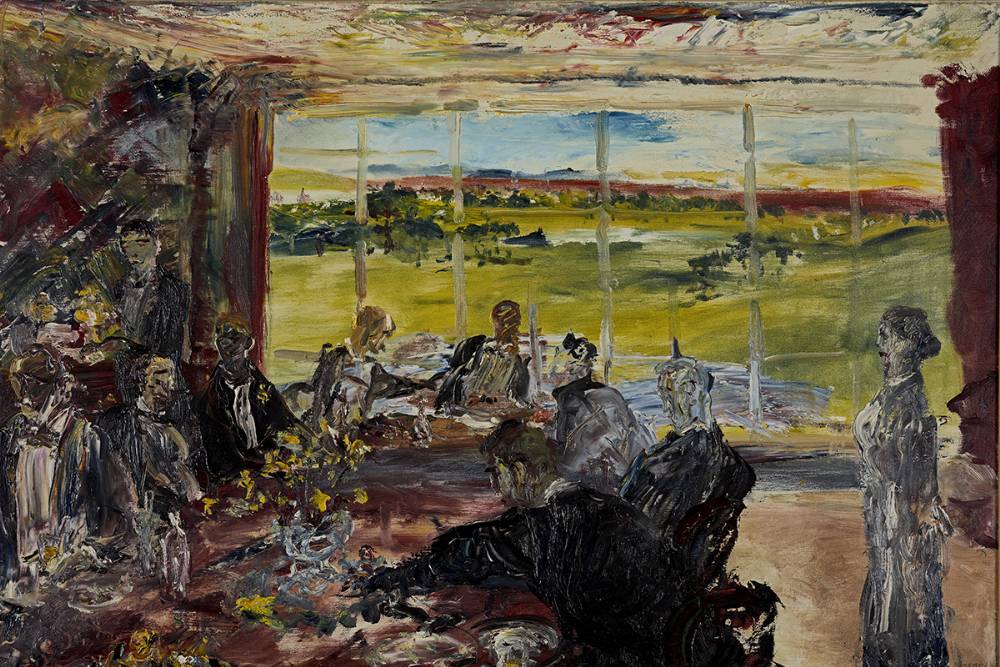 Evening in Spring may have been inspired by a memory of a Yeats family dinner in
Sligo, according to Hilary Pyle.1 A group of figures sit a...Read more
We are grateful to Christina Kennedy and Johanne Mullan of IMMA for their assistance with this work.

Evening in Spring may have been inspired by a memory of a Yeats family dinner in
Sligo, according to Hilary Pyle.1 A group of figures sit around a formal dining table with two servants standing behind them. The centre of the table is decorated by a large bowl of bright yellow daffodils which evoke the notion of spring and bring touches of vivid colour into the foreground of the composition. The large window gives a panoramic view of the open countryside beyond. Its expansive greenery, with distant mountains and the rich red of evening light provides a poignant counterpart to the relative darkness and congestion of the dining room.

This is one of Yeats most memorable and evocative paintings. It conjures up a feeling of nostalgia in the viewer through the richness of its colour and the vivacity of its
brushstrokes. The room seems to vibrate with reflected light, its white ceiling
transformed by flecks of colours. The wall on the left hand side looks as if it is dissolving into a cacophony of reds, blues, yellows and greens. Its conservative old-fashioned maroon décor is transformed into a moving sinuous substance. The figures appear oblivious to the allure of their surroundings, engrossed as they are in the formality of social interaction. At one level, however, the opening up of the background could be interpreted as indicative of their imaginations and their conversations rather than a literal depiction of the view.

Ernie OMalley bought this painting from Jack B. Yeats in 1945 and lent it anonymously to the National Loan Exhibition. It had already been included in Yeats exhibition at the National Gallery of London, curated by Kenneth Clark, in 1942. The work was singled out in at least one review which praised the tranquil and intimate feeling that it conveyed through its harmony of colour. (2)

1.Hilary Pyle, Jack B. Yeats. A Catalogue Raisonné of the Oil Paintings, Andre Deutsch,
1992. I, p.449.
2. London Letter, Belfast Newsletter, 2 January 1942, p. 4.
Whytes, in association with Christies, offered works from The Ernie OMalley Collection, highlighted by five paintings by Jack Butler Yeats. Comprised of 100 lots, also including early sketches by Yeats and work by the artists Mainie Jellett, Evie Hone, Louis le Brocquy, Colin Middleton and Norah McGuinness, the auction formed an anthology of Irish art from the early 1900s to the 1950s. Ernie OMalley was a leading revolutionary an in Ireland from 1916-22 who went on to publish two books detailing his experiences. The sale and international exhibitions provided an opportunity to discover his private passion for art and the relationships he developed with artists he encountered in America and Ireland.