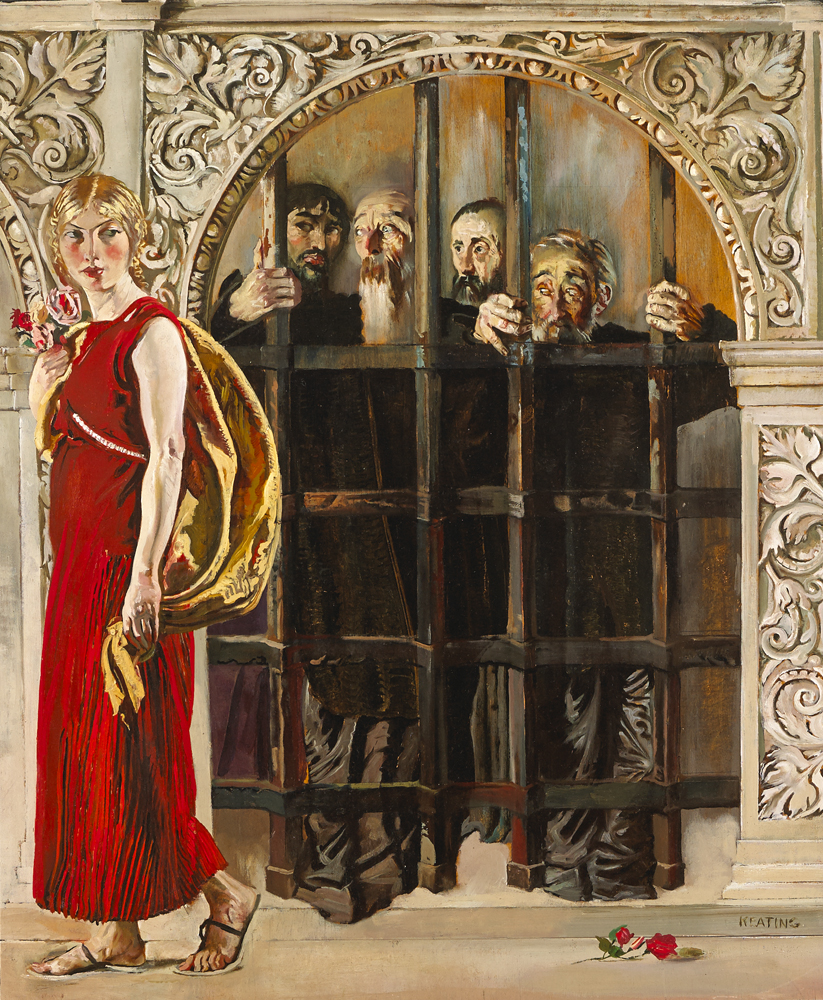 It was an important and prestigious commission, and Keating took his role as an illustrator of Synge's work very seriously. As if to expand on Synge's story, Keating chose scenes from the play that, for the most part, are not seen on stage. Perhaps most interesting of all is that Keating himself makes an appearance in the images as Christy Mahon's father. Proving his commitment to the commission, the artist even posed entirely nude for the scene in which Christy's father apparently awakes from the 'dead.' It is the only instance of a nude portrait of the artist in his entire career. In order to plan the compositions in great detail Keating undertook a series of photographs using models from the school of art. He may also have taken sketches at the theatre because many of the actors of the day appear in the illustrations. Sara Allgood, sister of Molly for whom the role was originally written, appeared as Pegeen Mike in a production of The Playboy of the Western World staged in 1924. The features of the female model wrapping bandages around Christie's head are very similar to Sara's, but in this instance she is now the Widow Quin. Barry Fitzgerald and F. J. McCormack, who took part in that same production in 1924, also make an appearance in Keating's illustrations as 'the hairy gallant fellows'. From 1926 until circa 1936 the role of Pegeen Mike was played by Eileen Crowe, who makes an appearance in Keating's work in the guise of 'Helen of Troy', while a cast of likely-looking prophets, or Abbey actors, appear behind 'the bars of paradise' in order to get a look at her (lot 94). The artist makes another appearance as the figure to the left of the group of prophets.

Once the publishers had reproduced the images to the required scale, the original paintings were returned to the artist who exhibited them in various venues in the late 1920s. They are an unusual, witty and yet contextually important series of works that signal the nature and extent of the interconnection between the visual arts and literature in the early years of the Irish Free State.

SALE OVER.
Whytes autumn auction of Irish & International Art on 26 September included a wonderful array from the Estate of George & Maura McClelland [Lots 1-78]. The collection included some of the finest examples from the oeuvres of Gerard Dillon, Tony OMalley, Louis le Brocquy, F.E. McWilliam, Colin Middleton, William Conor, Frank McKelvey, William Leech and many others. 170 works donated from the McClellands now form part of IMMAs permanent collection. The balance of the sale [a further 102 lots] includes several other major works by Irelands best-known artists including Jack B Yeats, Paul Henry, Walter Osborne, Dan O'Neill and Harry Kernoff.
Whyte & Sons Auctioneers Limited, trading as Whyte's, hereinafter called "the auctioneer" exercises all reasonable care to ensure that all descriptions are reliable and accurate, and that each item is genuine unless the contrary is indicated. However, the descriptions are not intended to be, are not and are not to be taken to be, statements of fact or representations of fact in relation to the lot. They are statements of the opinion of the auctioneers, and attention is particularly drawn to clause 5 set out below. Comments and opinions, which may be found in or on lots as labels, notes, lists, catalogue prices, or any other means of expression, do not constitute part of lot descriptions and are not to be taken as such unless they are made or specifically verified by the auctioneers.