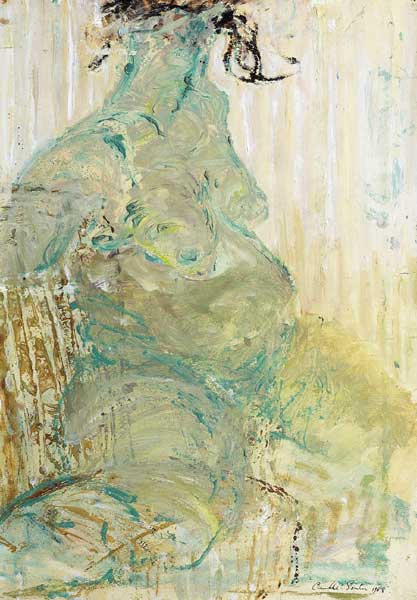 Physical processes of growth and decay are a recurring theme in Souters oeuvre. One thinks particularly of her paintings of dead fish, dead basking sharks and paintings of bloody meat from the 1970s. One could associate these with death alone but the fish and meat also provided food for people to eat. The dead basking sharks provided oil and other materials to sustain human life. Souter also painted subjects related to birth and regeneration.

Pregnancy depicts a friend of the artist and was drawn directly from life. It is, like most of Souters paintings of people, an intimate and sympathetic portrait. Having given birth to five children herself (the last in 1965), Souter would have identified strongly with her models condition. (See footnote) While the brushwork might appear light and impressionistic, the figure with her distended belly and prominently positioned thighs seems to be anchored by a heavy weight.

This is a private scene. The sitter does not look directly at the viewer and any recognisable facial features have been effectively concealed. Souter usually explains this by saying that she often finds back views more interesting, more mysterious. One cant help feeling that there may be more to it than that though. Generally speaking, Souter tends to depict people as they actually are, shorn of all affectation  not always, perhaps, how they would like to be seen. In this instance, maybe, there is a concern that the sitter might have found the artists gaze intrusive and Souter would certainly understand if she did. Souter despises posing for photographs. She is not very keen to have her own portrait painted, either. In conversation, the artist usually refers to this work as Silese When Pregnant. It was, however, originally exhibited under the more generic title Pregnancy so that the identity or privacy of her sitter would be protected.

Footnote:
An earlier painting, Things Inside (exhibited under the alternative title Figures in Embryo), was inspired by the artists pregnancy in 1957 with her daughter Gino. This painting was sold at Whytes as lot 49 on 30 April 2007 for 22,000.
Whyte & Sons Auctioneers Limited, trading as Whyte's, hereinafter called "the auctioneer" exercises all reasonable care to ensure that all descriptions are reliable and accurate, and that each item is genuine unless the contrary is indicated. However, the descriptions are not intended to be, are not and are not to be taken to be, statements of fact or representations of fact in relation to the lot. They are statements of the opinion of the auctioneers, and attention is particularly drawn to clause 5 set out below. Comments and opinions, which may be found in or on lots as labels, notes, lists, catalogue prices, or any other means of expression, do not constitute part of lot descriptions and are not to be taken as such unless they are made or specifically verified by the auctioneers.