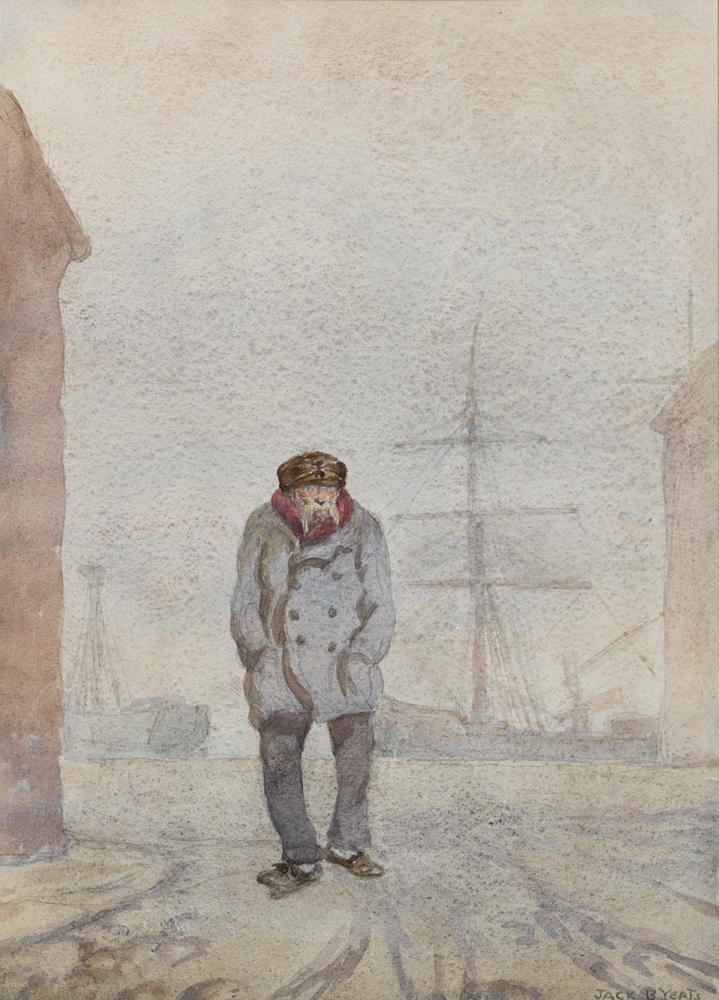 Quinn was the owner of several important works by Jack Yeats and was responsible for the artist's participation in the famous Armory Show of Modern art in New York in 1913. He was also a close friend and mentor of Jack's father, John Butler Yeats, who moved to the United States in 1908, and of his brother W.B. Yeats. Quinn bought Sea Fog in Dublin on a brief visit to the city in the summer of 1909 after it was included in a one-man show of Jack's work at the Leinster Hall. Quinn was a great admirer of the younger Yeats. In 1904, after Jack and his wife stayed in New York, Quinn wrote, 'He is one of the most simple and unaffected kind-hearted genuine and sincere men I have ever met and I like him more than I can tell'. [1]

The exhibition of 1909 in which Sea Fog was included was a critical success. Constance Markievicz commented on the quality of the work shown in it in an article published in the Gaelic American that year. Jack's work, she wrote, 'with its intense originality and life-likeness, seems to appeal to us with almost a shock, and to demand its just due,  as something real and new.'.[2] Yeats and Cottie had travelled in the west of Ireland the previous year, staying mainly in Sligo, where the idea for Sea Fog is likely to have originated. The figure of the old sea dog striding up the town ultimately stems from the childhood fascination that Yeats had for the seafaring life. This began with his journeys along the Garavogue in the ships belonging to his grandparents and his uncles and his great regard for the wisdom of the pilot men, stevedores and gangers that worked on the Sligo quays.

Dr Róisín Kennedy
August 2017
An outstanding opportunity to acquire works of quality and enduring value by Walter Osborne, Roderic OConor, William Orpen, John Lavery, William Leech, Jack Yeats, Paul Henry, William Conor, Seán Keating, Harry Kernoff, Maurice Wilks, JH Craig, George Campbell, Louis le Brocquy, Patrick Collins, F.E. McWilliam, Patrick Hennessy, Tony OMalley, William Crozier, Hughie ODonoghue and John Shinnors, to mention but a few of the 150 artists represented.
Catalogue on-site now. Enquiries to Adelle Hughes ah@whytes.ie or Peter Whyte, pw@whytes.ie
Whyte & Sons Auctioneers Limited, trading as Whyte's, hereinafter called "the auctioneer" exercises all reasonable care to ensure that all descriptions are reliable and accurate, and that each item is genuine unless the contrary is indicated. However, the descriptions are not intended to be, are not and are not to be taken to be, statements of fact or representations of fact in relation to the lot. They are statements of the opinion of the auctioneers, and attention is particularly drawn to clause 5 set out below. Comments and opinions, which may be found in or on lots as labels, notes, lists, catalogue prices, or any other means of expression, do not constitute part of lot descriptions and are not to be taken as such unless they are made or specifically verified by the auctioneers.