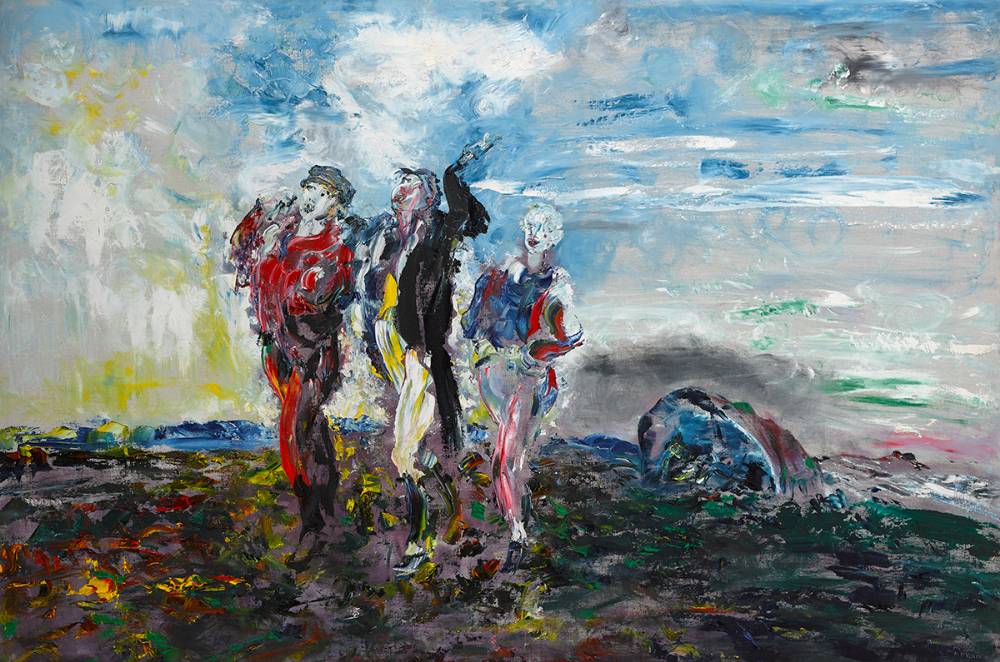 Hilary Pyle writes:
Three characters from Yeats' earlier drawings and paintings are brought together in a mood of happy exultation. A seaman, a jockey and a ballad singer, who have emerged from a barrel-topped whiskey tent (a typical feature of the early race meeting portrayed by Yeats) shout their joy to the sky, and the whole landscape responds in rich eloquent colouring.
The painting is one of the artist's finest achievements in these late visionary landscapes'

Yet another very successful auction hosted by Whytes showed that there is no slackening in the demand for art of quality. Held at the RDS on last Monday, 29 November the first saleroom auction held by Whytes since March 2020  the auction attracted 50 room bidders despite the weather and 500 on-line bidders as well as about 60 telephone bidders. Director and auctioneer Peter Whyte said the cold weather combined with our clients familiarity with internet bidding reduced the attendance but there was still a good degree of room bidding and a return to a real live auction atmosphere.

The sale grossed 2.5 million with 85% of lots sold

Among the highlights were Jack Butler Yeats Shouting at 1.74 million, equalling the world record held by Whytes for Irelands greatest artist, Grace Henry The Fortune Teller at 46,000, a new world record for Paul Henrys first wife, John Shinnors Towel and The Snowman at 42,360, Graham Knuttel Planet Hollywood at 24,900, a new world record for this popular artist, and Letitia Hamilton A Cove on Lake Garda, 21,800. Prices include buyers premium and VAT.