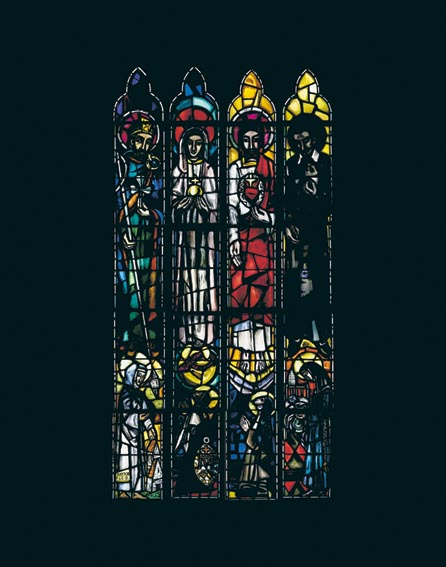 Hones profound influence on Pollen, apparent in this early work by him, is seen in the superb quality of the deep, thick pieces of glowing ruby, blue, amber and green glass selected to capture the passing light, the bold, expressive painting with thick brushstrokes and loose washes to enhance the rich colours and ensure clear, graphic legibility from a considerable height, and the gentle compassion with which each figure is depicted. Each of the figures, which were given to the artist by the Irish Vincentian fathers in Sheffield, is identifiable by distinctive attributes: St. Patrick by his crossed-snake mitre, torc, green alb and shamrock; St. Brigid by her Cross and Abbey; Ste. Catherine Labouré, the devout 19th century French Vincentian nun who beheld a vision of the Virgin Mary poised on a globe on which a serpent was prostrated, and was bidden to have a medal struck with this living picture; kneeling Ste. Marguerite-Marie Alacoque, the aristocratic 17th century Burgundian nun of the Order of the Visitation, whose visionary and penitential devotion to the Sacred Heart led to its subsequent official adoption; St. Vincent de Paul, the 17th century charitable reformer of hospitals, galley slave conditions, nursing and parochial missions and founder of the Vincentians holds a crucifix and looks down on a saintly blue-clad Vincentian nun who cradles a baby in one of the foundling hospitals he systematised. Dr Nicola Gordon Bowe
Dublin, February 2004

Whytes wish to thank the artist Patrick Pollen, Dr Nicola Gordon Bowe, Ken Ryan of Abbey Stained Glass and Muriel and Oliver Hone for their concerted efforts in the cataloguing of this work.
Catalogue available from April 8
Whyte & Sons Auctioneers Limited, trading as Whyte's, hereinafter called "the auctioneer" exercises all reasonable care to ensure that all descriptions are reliable and accurate, and that each item is genuine unless the contrary is indicated. However, the descriptions are not intended to be, are not and are not to be taken to be, statements of fact or representations of fact in relation to the lot. They are statements of the opinion of the auctioneers, and attention is particularly drawn to clause 5 set out below. Comments and opinions, which may be found in or on lots as labels, notes, lists, catalogue prices, or any other means of expression, do not constitute part of lot descriptions and are not to be taken as such unless they are made or specifically verified by the auctioneers.