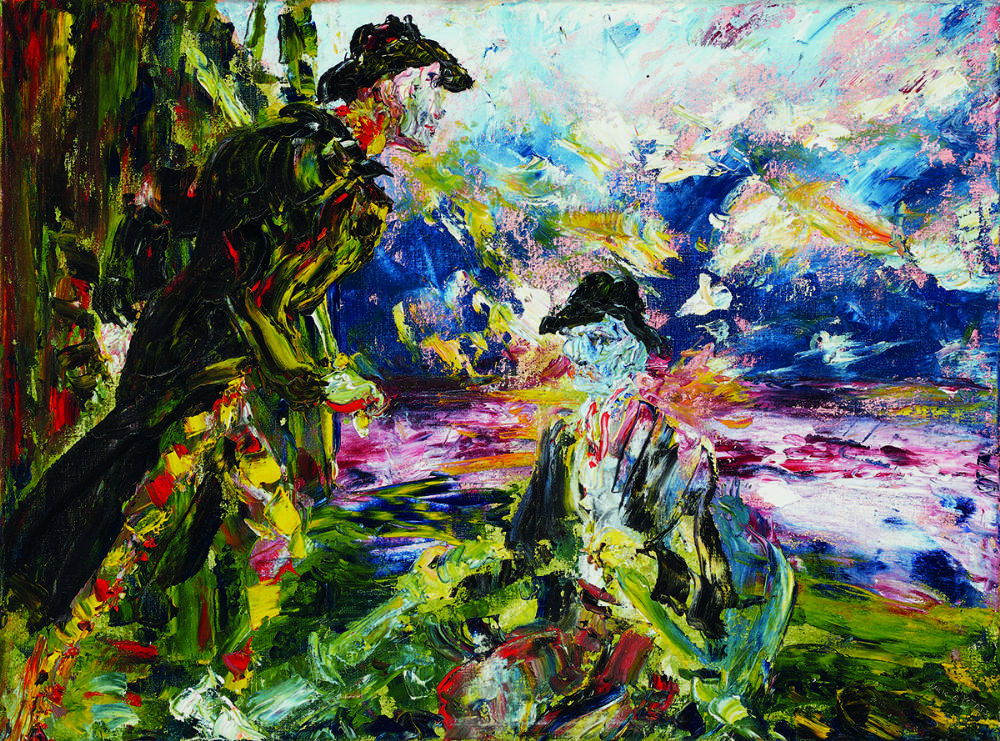 The painting is dominated by vibrant colours. The faces of the figures are sculpted out of thick blue and pink paint, a myriad of shades make up the neck and face of the striding figure. Their hiding place is made of dark green vegetation with highlights of red and yellow, painted in a series of long strokes. To the right shorter, more random strokes of blues, pinks and yellows evoke the open landscape of the sea, sky and mountain into which the two men venture. The rising sun casts a rosy hew over the water, conveyed in dense pink streaks across its surface. The painting encapsulates the unconventional beauty and vibrancy of the natural world at this moment, when everything comes to life. Its competing colours and moving forms are chaotic and perplexing.

The work was bought by Ernie OMalley directly from Yeats in May 1945, just a few weeks before the opening of the National Loan exhibition.

1. Hilary Pyle, Jack B. Yeats. A Catalogue Raisonné of the Oil Paintings, Andre Deutsch, 1992, II, p. 630.
Whytes, in association with Christies, offered works from The Ernie OMalley Collection, highlighted by five paintings by Jack Butler Yeats. Comprised of 100 lots, also including early sketches by Yeats and work by the artists Mainie Jellett, Evie Hone, Louis le Brocquy, Colin Middleton and Norah McGuinness, the auction formed an anthology of Irish art from the early 1900s to the 1950s. Ernie OMalley was a leading revolutionary an in Ireland from 1916-22 who went on to publish two books detailing his experiences. The sale and international exhibitions provided an opportunity to discover his private passion for art and the relationships he developed with artists he encountered in America and Ireland.