THE LIFE AND OPINIONS OF TRISTRAM SHANDY, GENTLEMAN 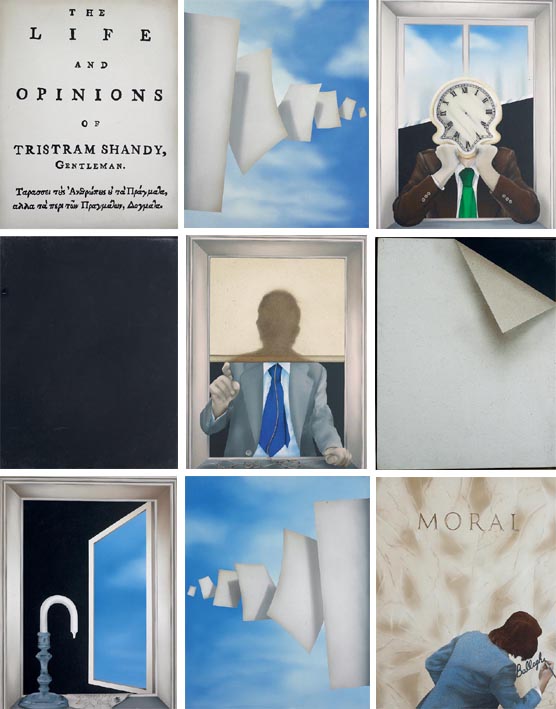 Kieran Hickey, who had earlier written a film script on the life of Sterne, recognised the bond between the eighteenth century author and the twentieth century painter: If ever a writer expressed the nature of writing and the consciousness of being a writer writing for an audience reading what one is writing, it was Sterne, [and] if ever there was a painter who paints pictures about the consciousness of a painter as he paints pictures for an audience who are looking at a painting he has painted, it is Ballagh, he said (quoted in Carty op. cit, p.123).

With Ballagh enthused about the writings of Sterne, his client agreed upon two works relating to the author and his Clonmel roots. The first work was a triptych portrait of Sterne and the second was a 5 foot by 36 foot mural based on Tristram Shandy. The present work is an identical but smaller version of the mural, which Carty has described in detail:

Sterne, spitting blood when he coughed [he was consumptive], had an obsession about time. All his writing was an attempt to depict its passing with ever increasing exactitude. To suggest this in The Life and Opinions of Tristram Shandy Ballagh resorted to a movie image: the Hollywood convention of illustrating an elapse of time by flipping the pages of a book. The painting took the format of a strip of pages from the novel which appear to be blowing away like leaves in the wind of time. Tristram is shown in surreal close-up, his head a drooping clockface, about to be guillotined by a window, a reference to his mothers untimely remark (Pray, my Dear, quoth my mother, have you not forgot to wind up the clock?") which condemned him to a life of misfortune. Ballagh also works in an allusion to an unfortunate incident when, as a child wanting to pee in a hurry, he had gone to an open window, forgetting his uncle had removed the sash weight to make a toy cannon. This same uncle Toby, on being asked once where he had been wounded during his war years, replied that there were two answers, Outside the walls of Namur or in the groin. Ballagh frames each of these images in a window, in keeping with Sternes speculation on the consequences of there being a window in every human breast through which could be seen his soul. The final page in the sequence, entitled Moral, shows Ballagh bending down to sign the corner, a mocking reference to his gesture in the last of his pictures of people looking at paintings. Having signed off Modernism, he was now signing on as a figurative painter" (Carty, op. cit., p.215).
Now accepting entries.
Whyte & Sons Auctioneers Limited, trading as Whyte's, hereinafter called "the auctioneer" exercises all reasonable care to ensure that all descriptions are reliable and accurate, and that each item is genuine unless the contrary is indicated. However, the descriptions are not intended to be, are not and are not to be taken to be, statements of fact or representations of fact in relation to the lot. They are statements of the opinion of the auctioneers, and attention is particularly drawn to clause 5 set out below. Comments and opinions, which may be found in or on lots as labels, notes, lists, catalogue prices, or any other means of expression, do not constitute part of lot descriptions and are not to be taken as such unless they are made or specifically verified by the auctioneers.