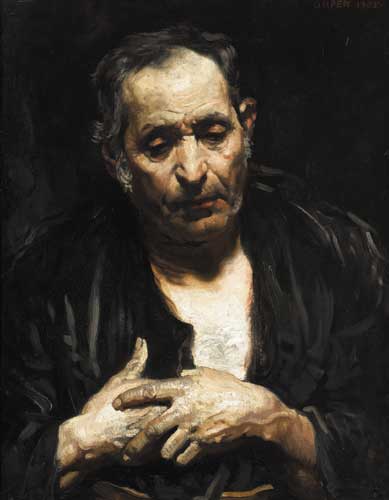 Bruce Arnold recounts that The Saint of Poverty was inspired by a work by Joseph Ribera (1589-1652), Saint Procopius, which the National Gallery of Ireland had purchased from the 4th Duke of Leinster in 1879 (Arnold, op. cit., p. 123). Riberas saint is seen stripped to the waist, his withered body commanding pathos even whilst his transfixed gaze indicates an ecstasy of vision. Orpens saint is more introspective and thoughtful; it is clearly the study of an actual person and bears witness to the former hardships faced by his model, Mr Green.

According to the inventory of paintings in Konody and Dark, Orpen painted two versions of The Saint of Poverty, one of which was exhibited at the New English Art Club in 1905 and again, the following year, at the RHA. Judging by the description of the exhibited work given by the critic for the The Speaker, it is probable that the present version is the one that which was shown in London and Dublin:

Powerful, and in many ways more gratifying than more elaborate compositions he has shown here, are Mr. William Orpens Saint of Poverty and Spanish Woman. The former is the half-length of a middle-aged man with his hands folded across his breast; the firm mouth and deep-set eyes are beautifully drawn and painted, the gnarled and knotted hands of the toiler are exquisite in their truth and brilliant craftsmanship. Rich blacks and their varieties are the ground-work of his colour scheme. Both in this and in the half-nude Spanish Woman, where he employs black as a foil to sufficiently idealised flesh tones, he handles it with unusual ability. Above all, these canvases, straight-forward and boldly painted as they are, seem to me to indicate a genuine sense of beauty that augurs well for future development.
PRICES GIVEN BELOW ARE WHAT LOTS WERE SOLD FOR OR BID TO AND WITHDRAWN.
Whyte & Sons Auctioneers Limited, trading as Whyte's, hereinafter called "the auctioneer" exercises all reasonable care to ensure that all descriptions are reliable and accurate, and that each item is genuine unless the contrary is indicated. However, the descriptions are not intended to be, are not and are not to be taken to be, statements of fact or representations of fact in relation to the lot. They are statements of the opinion of the auctioneers, and attention is particularly drawn to clause 5 set out below. Comments and opinions, which may be found in or on lots as labels, notes, lists, catalogue prices, or any other means of expression, do not constitute part of lot descriptions and are not to be taken as such unless they are made or specifically verified by the auctioneers.