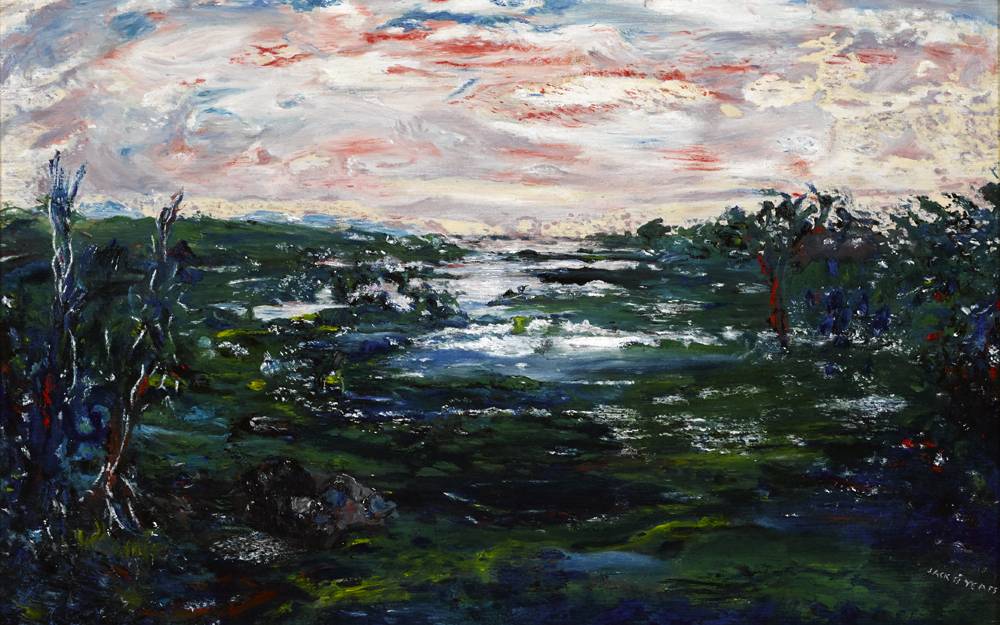 Yeats did several watercolour paintings of Coole Park in 1900 including The Lake, Coole, the composition of which is very similar to Winter in Galway. (2) The oil paintings Coole Lake (1923, Private Collection) and Small Weir, Coole, (1923, National Gallery of Ireland) were made after the artist's visit to Coole in the summer of 1923 when he made several sketches of the scenery. Coole Park may also have inspired Visitors, (1946, Private Collection) an imaginary subject which refers to the history of the house and its parkland. Another late work, The Lake at Coole (1943, Private Collection) was painted largely from memory. (3) According to its full title the view in Winter in Galway is taken from Coole Park house but again the work is probably based on existing sketches and paintings and Yeats's memory. It shows the famous lake framed by woodland and set against an expansive horizon with blue mountains in the distance to the left. The pinkish tones of early evening light are echoed in the deep red on the barks of the leafless trees. Painted in 1944, three years after the house was demolished, there had been many changes to Coole Park. Robert Gregory was killed during the First World War and his mother had died in 1932. Margaret had remarried and moved away. This is a poignant subject for Jack, who after the death of W.B. in 1939, was revisiting in his imagination a place that was closely associated in his memory with youth, friendship and the creative potential of those past years.

Aside from its personal associations, this is a pure landscape which highlights the powerful forms and colours of nature in winter when darkness is about to fall. The stark bare trees are painted in strident blues and reds as they reflect the strong fading sunlight. They stand erect and sparse amidst a marshy terrain of intense greens and blues flecked with white to indicate the waterlogged conditions. The power of the opaque colours and the subtlety of the dynamic elements of sky, water and vegetation belie that fact that this is a view of the countryside in hibernation and decline. The foaming waters of the lake extend towards the distant horizon and draw the eye into the painting. Their meandering form imparts a poignant sense of the endurance of the natural world while the complex construction of the painting's surface and its myriad forms reminds us of the fact that this is first and foremost a work of art rather than a conventional topographical rendering of a familiar view.