3,000 YEARS OF COLLECTIBLES AT WHYTES 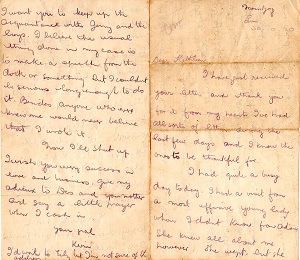 The most valuable lot in the sale is the last letter written by Kevin Barry, hours before he was executed [lot 173]. Written to Kathleen Carney it finishes poignantly "Say a little prayer when I cash in, your pal, Kevin". About eight hours later the 20-year-old Irish Volunteer was hanged by the neck until dead, as sentenced by a Court Martial for killing a soldier in an attack to capture arms. Kevin Barry’s signature is much prized by collectors as they are rare, given that he died so young, and this sale includes 4 of his schoolbooks, including his French book, signed “K. Barry, Loyalist of Irish Republic” when he was about 15 [lot 178] estimate €1,000 to €1,500.

In the Scorsese film “The Irishman” the hitman Frank Sheehan, played by Robert de Niro, says he “paints houses” which is Mafia slang for killing people. However, the phrase was also used by the IRA in the War of Independence and one of their favourite weapons was a Mauser pistol nicknamed “Peter The Painter”. A fine example of this deadly weapon – deactivated of course – with a provenance (history of ownership) back to a Co. Kildare Volunteer, is expected to make €4,000 to €6,000. [lot 168]

The Parnell Commission, 1888 to 1889, was a judicial inquiry  into allegations of crimes by Charles Stewart Parnell which resulted in his vindication. Lot 81 is a collection of drawings by Sir Frank Lockwood showing the judges, lawyers and witnesses – a superb visual record of this historic attempt to imprison and silence Parnell. In need of some restoration the estimate is €3,000-€5,000. 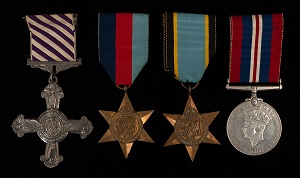 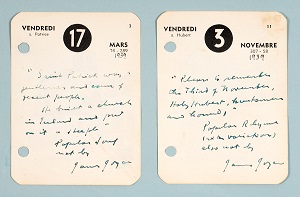 "Saint Patrick was a gentleman and came of decent people. | He built a church in Ireland and put on it a steeple", and "Please to remember the Third of November, | Holy Hubert, huntsman and hound". So wrote James Joyce in green ink, each on a leaf from a desk calendar, 17 March and 3 November respectively, the quotations referring to the respective saints' days, dated 1939. This framed Joycean collectable is expected to bring €6,00 to €8,000 [lot 403].

As usual this sale includes some scarce and interesting coins such as James II “Gunmoney” [lots 433-441] – so called because the king ran out of cash and had cannon, church bells and other bronze objects melted and minted as coinage to pay his troops. Values range from €20 to €150 each. Nowadays Ministers of Finance just print more paper! Speaking of which a Ten Pounds note issued by the Munster and Leinster Bank in 1929 [lot 475] in excellent condition and rare thus, is expected to make €5,000 to €7,000. 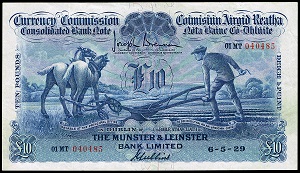 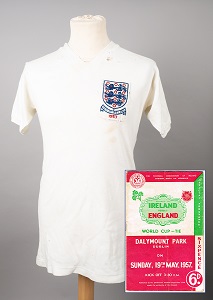 Sports fans are well catered for with collectibles for Gaelic games, rugby, soccer, golf and motorcycling. Manchester United fans would prize an England shirt worn by Roger Byrne, a ‘Busby Babe’ and one of the greatest ever captains of the Reds [lot 519]. Byrne swapped it with his opposite number Seamus Dunne at the Ireland v England World Cup qualifier on 19 May 1957. 9 months later Roger Byrne was killed in the Munich aeroplane crash along with several of his teammates. The shirt is expected to make €3,000 to €4,000.