Thought about dipping your toe into the art world? There has never been a better time to dive in and immerse yourself. With over 230 lots and guides from as low €100 to a top estimate of €2,000 this sale will encourage both cautious first-time buyers and those seasoned bidders to ‘click and win’ in this tempting online-only offering. 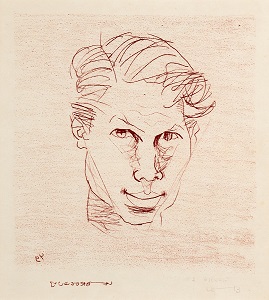 WONDERING WHAT YOUR NEW MASTERPIECE WILL LOOK LIKE ON YOUR WALL?

With current restrictions in place there will be no public viewing for this auction but don’t worry - Whyte’s have you covered. As well as our virtual tour and interior shots, our website offers the Art Virtualiser App so you can – using your smart phone – envisage how each picture will look to scale on your own wall. 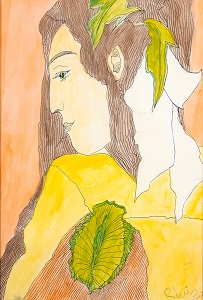 Dutch artist Piet Sluis was born in 1929 and came to Ireland in the 1950s where he had a distinguished career as a graphic designer. His paintings draw inspiration from jazz music and the artists movement 'Cobra' in the early 1950's. His decorative paintings in soft colours, juxtapose aspects of Cubism and Post-Impressionism. His imagery is a reaction to structure and presents the solitary vision of the possibility of romance. In this sale Whyte’s offer a collection of fifteen works from the artist including Angela, 2007 (lot 106, €200-€300.
Ronald 'Carl' Giles OBE (1916-1995) worked as a cartoonist for Express Group Newspapers from 1943 to 1992. Giles's was best known for his cartoons which appeared in the Daily Express newspaper. He used his cartoon family to illustrate and comment on topics of the day. Miles Robinson’s Giles Grandma (lot 140A, €300-€500) is a smaller version of the sculpture on public display in Ipswich.

Ireland’s best-known names feature in this sale.  If an oil by Paul Henry is out of reach, a photolithographic print, The Potato Diggers, lot 10 guides €500-€700. However, even these prints can spiral in price as previous examples have proved. 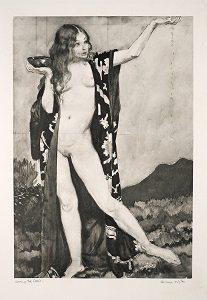 A photogravure print Sowing The Seed (lot 127, €250-€350) from a Portfolio of ten reproductions of works by William Orpen is on offer. This lot includes a copy of Sir William Orpen by P. G. Konody & Sidney Dark and 'Mr. Punch's Personalities' A Portrait Series Published Between 1925 and 1929 in the British Publication 'Punch' V - Sir William Orpen, illustrated by Bernard Partridge. Thirty-Six Woodcuts by Harry Kernoff (lot 128) is good value, guiding at €250-€350. Attractively priced works by Peter Collis, Kenneth Webb, Gerard Dillon and Mary Swanzy will all be well worth a bid while auction staples such as Markey Robinson, Graham Knuttel, John Kingerlee and Fergus O’Ryan among many others all feature.

All the artworks on display with full descriptions and, importantly for on-line bidders, condition reports, at www.whytes.ie. All works sold by Whyte’s come with a Certificate of Authenticity, another reassurance for internet buyers.