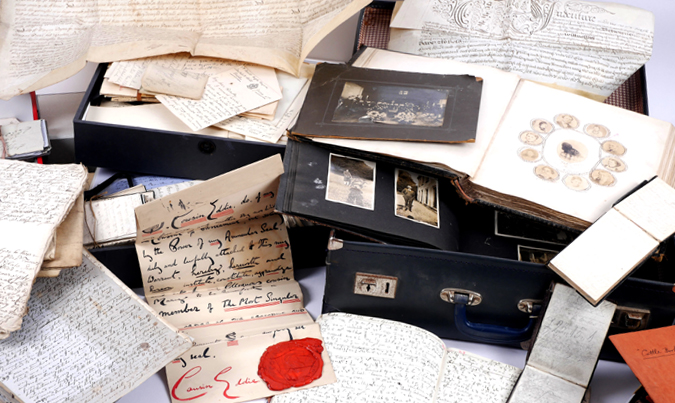 An important and extensive archive of documents, relating to the Moores, Earls Mount Cashell and the Smyths and Holroyd Smyths of Ballynatray, Co. Waterford, is to be sold in 29 lots in Whyte’s Eclectic Collector auction on 6 April. The archive includes the minutes of Clonmel Town council from 1692-1711 (lot 13, estimate €1,500-€2,000); legal documents relating to property and marriage transactions between Moores, Ponsonbys, Colvilles, Smiths and other Anglo-Irish families from the 1660s to the mid-20th century (lots 12 and 20, estimates range €3,000-€6,000); and the extraordinary North American diaries of the 3rd Earl Mount Cashell, running to over a million words (lot 16, estimate €2,000-€3,000). Among the most interesting documents in the archive are letters and photographs which tell the story of the unlikely relationship between Alice Holroyd-Smyth, chatelaine of Ballynatray estate in West Waterford and the local IRA during the War of Independence and Civil War (lot 203, estimate €2,000-€3,000). The archive is an invaluable record for historians and genealogists and includes letters written by Edith Sommerville Ross (lot 207), Horace Plunkett (lot 27) and Oliver St John Gogarty (lot 25) and a correspondence between Sir Horace Plunkett and George Bernard Shaw after the burning by the IRA of Plunkett's house (lot 206). 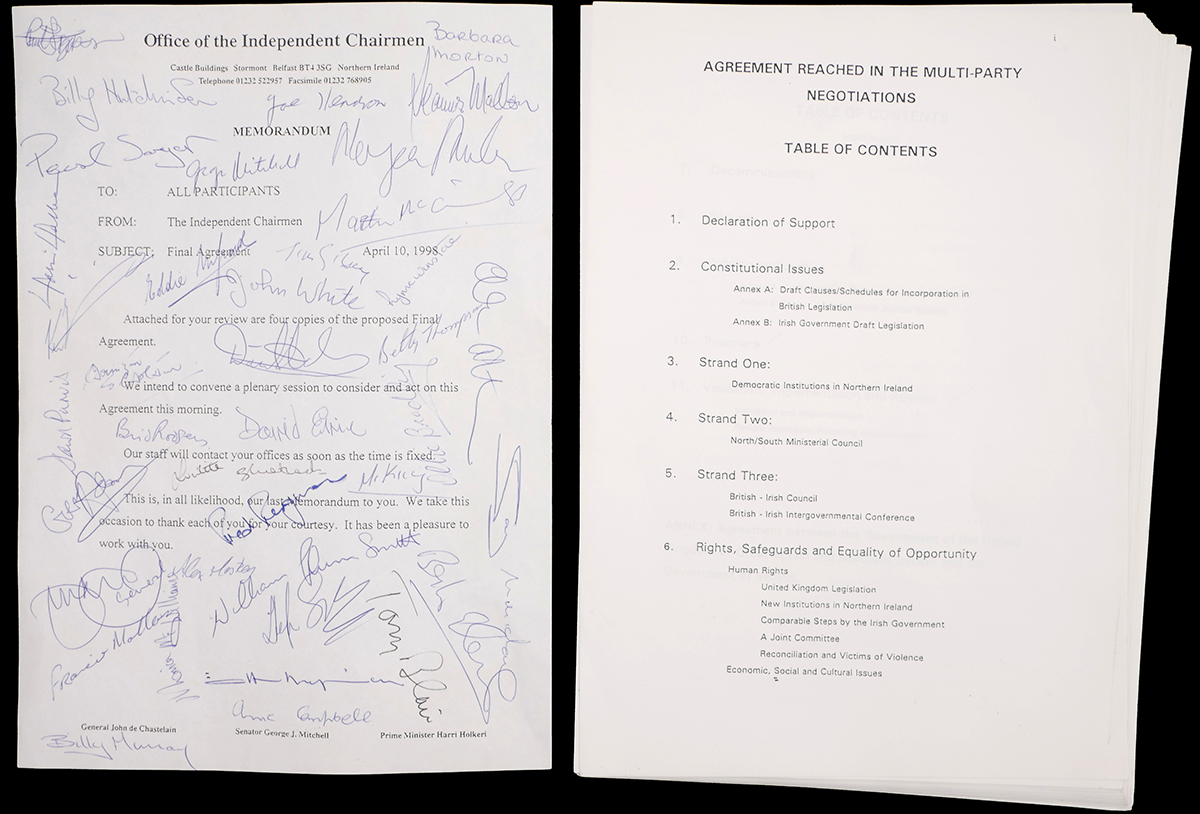 Few documents can be as topical as the Belfast ‘Good Friday’ Agreement, the landmark power sharing arrangement, which has given us more than 20 years of peace on this island.

The final draft of the Agreement was printed at Stormont on Good Friday, 1998 and distributed to delegates with a covering memorandum, which includes the phrase, “This is in all likelihood our last memorandum to you.”. A member of the Progressive Unionist Party delegation collected the signatures of forty-four participants including Tony Blair, Bertie Ahern, Martin McGuinness, Gerry Adams, George Mitchell, David Ervine, Brid Rogers, Billy Hutchinson, Seamus Mallon et al., The signed document is lot 261 in Whyte’s Eclectic Collector auction on 6 April, estimate €5,000-€7,000. 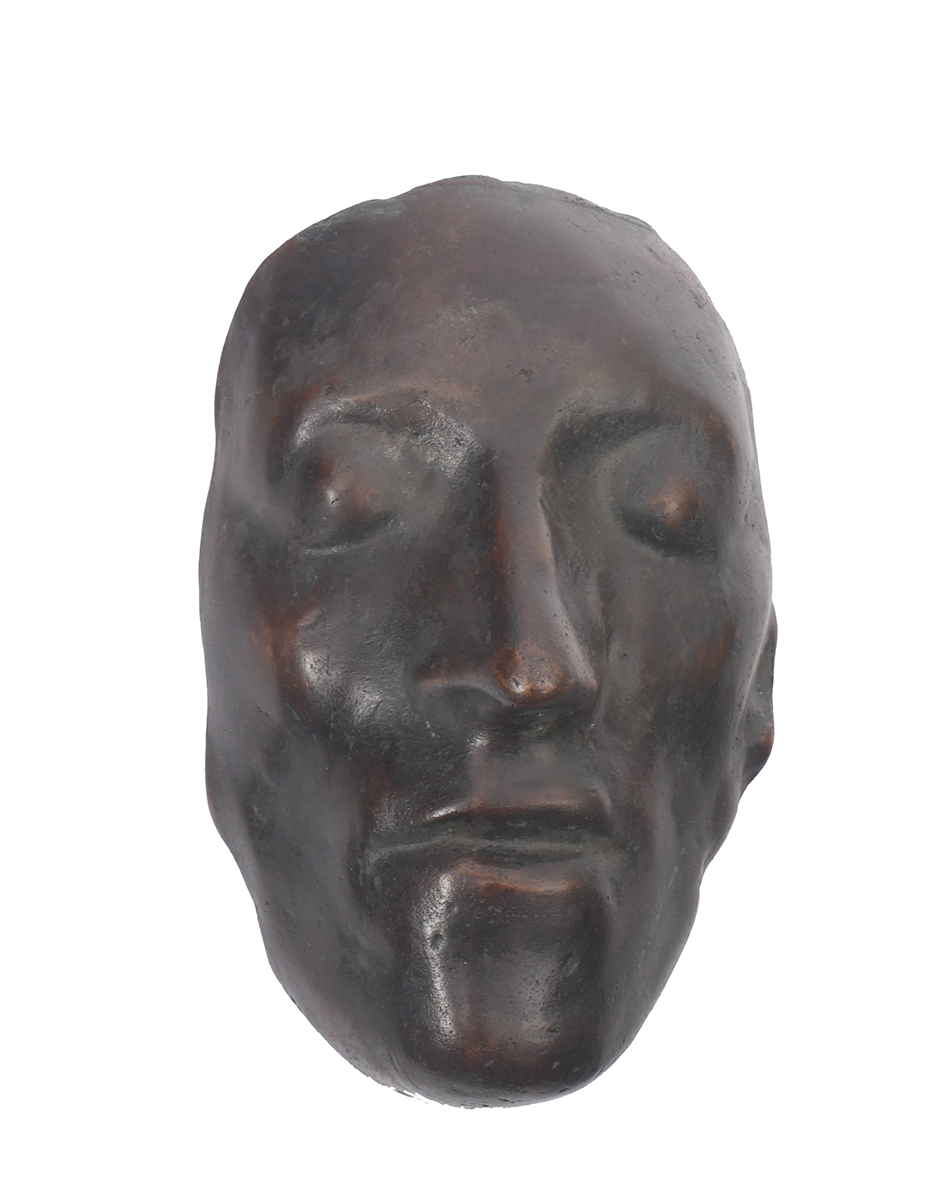 James Petrie (d.1819) was born in Dublin of Scottish parents. His studio at 82 Dame Street, where he painted portrait miniatures, also served as a kind of antiques and curios shop where he carried on business in jewellery, coins and antiquarian objects. He drew portraits of notable figures for magazines and published prints of Napper Tandy and John Philpot Curran, now very scarce.

Petrie’s most enduring work was more macabre, on 20 September 1803 he inveigled his way into Kilmainham Gaol where the executed Robert Emmet’s body had been brought and took a plaster cast of Emmet’s face. From this mould he made likenesses known as death masks which he then sold. It was one of these masks which was used to create a small number of bronze death masks, one of which is lot 53 in Whyte’s Eclectic Collector auction on 6 April, estimate €800-€1,200. Emmet’s corpse has never been positively located.

Submarine in a bottle.

The Poles had little to celebrate in Autumn 1939

Their proud nation was being crushed beneath the Nazi Blitzkrieg and resistance was reduced to skirmishes. The Orzel, one of the Polish Navy’s three submarines, was tasked with blockading the German battleship Schleswig-Holstein in Danzig port but was damaged by German minesweepers. She sailed to neutral Estonia, arriving in Tallinn on 14 September and was arrested by Estonian military authorities at the behest of Nazi Germany. She daringly escaped, damaging her radio in the process. The crew sailed her through the Baltic and around Denmark without charts or any navigational aid, other than a list of lighthouses. In the North Sea she was repeatedly attacked by both German and British warships. Forty days after she had originally sailed from Poland, Orzel made landfall, off the east coast of Scotland. She lay on the bottom until emergency repairs were made to the radio, then surfaced to transmit a message in English. A Royal Navy destroyer was despatched to escorted her into port. Lot 230 in Whyte’s April 6 Eclectic Collector auction is a diorama in a bottle with naively carved bone model of the Polish submarine Orzel sailing out of Tallinn. It has all the appearances of prisoner of war art and one can’t help but imagine a Polish prisoner of the Third Reich defiantly carving the heroic ship from scraps of bone. Estimate €150-€250.

A twenty pence coin dated 1985 [lot 397] is expected to fetch as much as €6,000 in Whyte’s Eclectic Collector auction on 6 April. These coins were issued in advance of production to various companies and organisations to facilitate calibration of vending machines and other coin operated devices such as telephones, meters etc. According to sources in the Central Bank less than 50 pieces of the 500 or so issued were not returned. To date about ten examples in private hands have been recorded, making it one of the rarest Irish modern coins.

Just remember the date – 1985 – no other twenty-pence piece is worth more than its face value.

A twenty pounds note, lot 454, issued by the Central Bank of Ireland in 1943, is expected to make in the region of €5,000 to €6,000. The note bears a ‘War Code’, a special random overprint designed to thwart forgers – particularly the Germans who were actively forging British and American notes. Whyte’s previously got a record price of €9,500 for a similar example. If it had been spent in 1943 it would have bought you the equivalent of €700 worth of goods today. 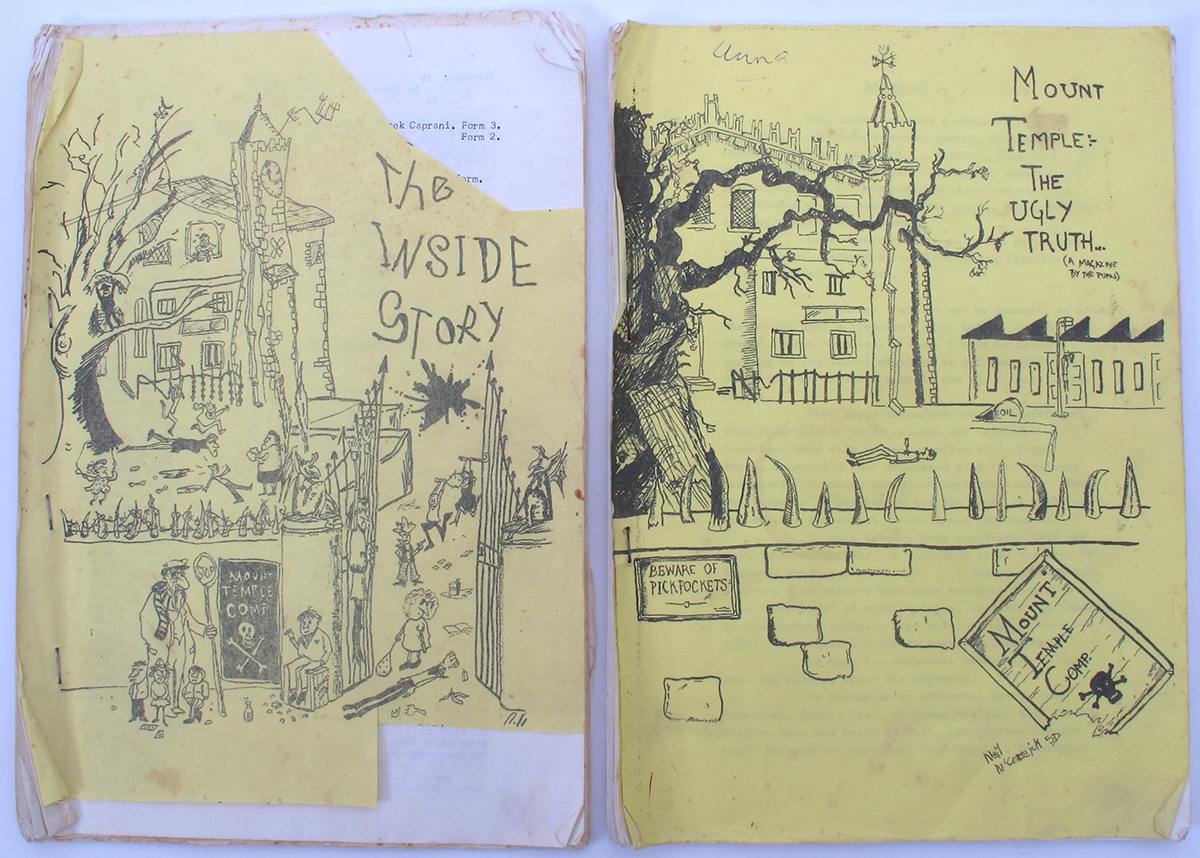 Two issues with contributions from Bono, his future wife, the Edge and Adam.

The liberal ethos of Mount Temple Comprehensive School in the 1970s shouts from the pages of the two issues of its student-produced magazine, ‘Mount Temple, The Inside Story’ (1976) and Mount Temple, The Ugly Truth (1978) Contributions include Adam Clayton's piece on Dublin's live music scene, 'Aggro in the Pop Culture', Dave Evans' (Edge’s) review of the Junior Cup rugby team and Paul Hewson's (Bono’s) interview of the headmaster, Mr Brooks. There is also a theatre review by Alison Stewart (Ali Hewson, Bono's wife). Consigned by a former classmate of Bono’s, the magazines are lot 595 in Whytes Eclectic Collector auction on 6 April, estimate €600-€800. Lot 594, from the same vendor, is a Mount Temple school photograph, class of 1977, featuring Bono looking ready to take over the World, estimate €150-€200.

Viewing at Whyte’s, 38 Molesworth Street, Dublin 2: Wednesday to Friday, 3-5 April, 10am to 5pm daily. The auction starts at 11am on Saturday 6 April at Freemason’s Hall, Molesworth Street, and will be broadcast live at www.bid.whytes.ie