FIVE MILLENNIA OF COLLECTIBLES AT WHYTES

FIVE MILLENNIA OF COLLECTIBLES AT WHYTE’S 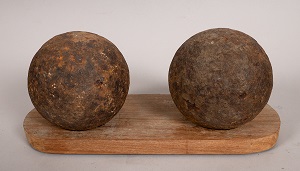 Flicking through the catalogue is like watching ‘Reeling in The Years’, the popular RTÉ show, but over many centuries more. Many historic events are represented by collectibles such as The Elizabethan War – cannon balls from Cork circa 1603 [lot 7, €150-€200, illustrated above], through the Battle of The Boyne with contemporaneous Dutch engravings [lot 10, €100-€150, the 1798 Great Rebellion with several items including a pike head [lot 27, €300-€500] and the last letter written by United Irishmen leader, John Sheares, on the eve of his execution [lot28, €1,500 to €2,000]. 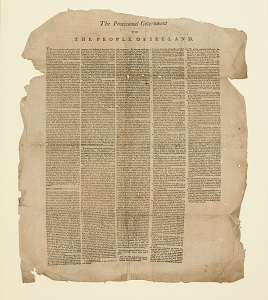 An outstanding historical relic is the 1803 Proclamation penned by Robert Emmet for the short-lived rebellion of that year [lot 35, €50,000-€70,000, illustrated above]. The document provided Pádraig Pearse inspiration for his 1916 Proclamation but is about 15 times scarcer with only three recorded examples in private hands and none listed in the State collections. This example has impeccable provenance as it belonged to the Wolfe family in County Kildare up to 1994. Theobald Wolfe Tone was named after his godfather, Theobald Wolfe, and another member of the family, Lord Kilwarden, was killed during the 1803 uprising. 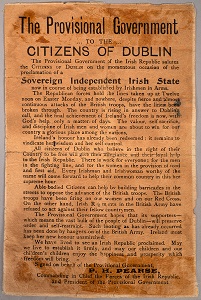 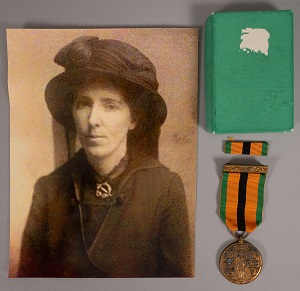 The 1916 Rising and the War of Independence is represented by over 200 lots, ranging in value from €100 to €12,000. The latter estimate is for an extremely rare second – and last – bulletin published during the Rising by Pádraig Pearse as “Commander-in-Chief of the Forces of the Irish Republic” [lot 169, €8,000-€12,000, illustrated above]. There is a great array of medals to participants including a rare group to a Citizen Army fighter [lot 195, €6,000-€8,000]. Another medal of special interest is that awarded to Kathleen Clarke, widow of executed leader Tom Clarke and sister of Ed Daly, also executed after the Rising. She was an indomitable republican activist throughout the War of Independence and founded, with Michael Collins, the National Aid Fund. Later in life she was the first female Lord Mayor of Dublin (1939-1941). The medal, to mark the 50th anniversary of The Truce, awarded in 1971 to those still living veterans of the War of Independence. [lot 266, €8,000-€12,000, illustrated above].

We are now approaching the end of the Decade of Centenaries and this year we will mark the foundation of the Free State and the beginning of the Civil War, as well as the deaths of Michael Collins, Arthur Griffith and Erskine Childers. Whyte’s offer an extensive range of collectibles related to these events. Probably the most important is the “Suspension of Offensive” document signed by Frank Aiken, Chief of Staff of the Anti-Treaty IRA, ending the Civil War on 27 April 1923 [lot 302, €8,000-€12,000). 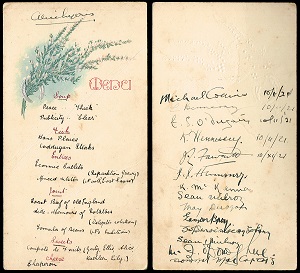 Michael Collins is the most popular hero for many collectors and Whyte’s sale includes over a dozen desirable items, the most valuable being an autograph book containing the signatures of the Irish delegation, including Collins, Griffith, Risteard Mulcahy, Erskine Childers and many others as well as Sir John Lavery the famous artist who was a friend of Collins [lot 282, €6,000-€8,000]. The signatures were collected by Alice and Ellie Lyons, two young women who worked for the delegation as secretaries. Also from the sisters Lyons are a pair of menus for dinner during the Treaty negotiations in London, again signed by Michael Collins and other delegates and advisers [Lots 285 and 286, €3,000-€5,000 apiece].

An archive of documents, photographs and ephemera from the estate of Joe Groome will be of immense interest to political historians as Joe was a famous Fianna Fáil activist and Dublin hotelier [lot 369, €1,500-€2,000]. He was a founder member of the party in 1926 having served in the IRA during the War of Independence and served as Honorary Secretary under de Valera, Lemass, Lynch and Vice President under Charles Haughey. There are also over 20 lots of collectibles from the archive including posters, badges, leaflets, Ard Fheis programmes, etc.

A rather sad and rare memento of the Irish Brigade that fought in the Spanish Civil War is a certificate for service in General Franco’s fascist army for a man from Tralee by the name of Daniel Chute [lot 391, €300-€500). The unfortunate Chute was killed within a week of arriving in Spain – shot dead in error by Franco’s forces.