Newsletter Signup
Whyte’s Important Irish Art auction will include some of the most sought-after names in Irish art. The sale will take place at the RDS, Ballsbridge on Monday 27 May at 6pm, viewing will be open to the public from Saturday to Monday (25-27 May, 10am-6pm).
On the back of a very succesful opening sale of 2019 in March – with 90% of lots sold totalling a hammer price in excess of €1m, and the most desired works fetching two and three times in excess of their estimates – it is with great pleasure that Whyte’s presents yet another robust offering to collectors. By value, two of the top lots in the sale are by the most enduring names on the market: Jack Butler Yeats and Paul Henry. The former is represented with The Quay Worker's Home, 1927 [lot 39, €60,000 to €80,000] and the latter, Western Landscape, c. 1935-40 [lot 16, The instant familiarity lovers of Irish art feel when they view a Paul Henry painting is part of the enduring charm of this mainstay in Irish art auctions.  Owing to the wide dissemination of his work in the form of tourist posters, both nationally and internationally, Henry has become a household name. His prized original works in oil define any art collection and continue to represent a quality investment. Western Landscape, c. 1935-40 displays all the hallmarks of the Belfast born artist: a west of Ireland subject, thatched cottages, turf stacks, bog lake and dominant cumulous clouds. 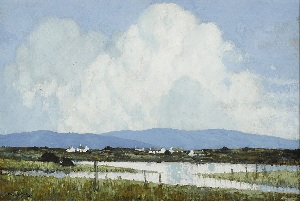 The Quay Worker's Home has been described by the leading scholar on Jack Yeats – Dr Róisín Kennedy - as “…a remarkably poignant and rare depiction of urban life in 1920s Ireland.” The wonderful oil shows an ashen faced quay worker (docker) standing in the dim interior of his modest home warming his hands by the fire. Yeats felt a deep empathy towards the plight of working men and women and the present work is testament to this. The importance of this work in the artist’s oeuvre is unquestionable. It has been widely exhibited since its first showing in 1927 to include retrospectives (Montreal, 1969) and major shows at the RHA, Dublin (1995), Douglas Hyde Gallery, TCD (2004) among others. With a shortage of such pieces on the market, this particular example is sure to attract judicious bidders.€100,000-€150,000]. 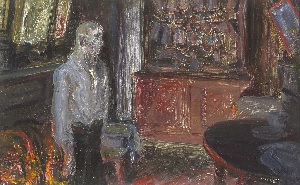 In 1904, John Lavery’s Printemps, a painting of Mary Auras recently acquired by the French state, was the toast of Paris. Mary in Black, c. 1904 [lot 26, €60,000-€80,000] is a smaller work in which we experience a more intimate encounter with Lavery’s flame-haired model. When Printemps was purchased, Mary was seen as the flower of Englishness at a time when angloemanie was in the air. However, the model was in fact German. As Arnold Bennett discovered when he met Lavery’s friend, Mary was actually ‘the rage of Berlin’ and had received 5 proposals in three months. Miss Auras was sixteen when she was introduced to Lavery and went on to model for the artist for six years. 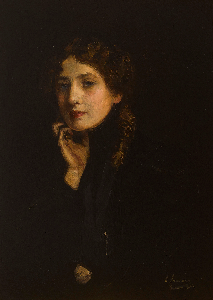 Another example on offer from Sir John Lavery is The Wreck of the Delhi, Sidi Cassim, Morocco, 1911 [lot 25, €10,000-€15,000]. This oil sketch was used when Lavery embarked upon his large canvas of the subject early the next year. Arguably, the present oil sketch more accurately conveys the full intensity of the dramtic sight that day.
As in March, Whyte’s are offering superb works from important Irish female artists, notably Lilian Lucy Davidson’s Potato Harvest, 1931 [lot 19, €30,000-€40,000]. Like the artist’s work Gorta, 1946, this painting shows the reliance of Irish peasantry on the potato for survival. The work was exhibited at the RHA in 1931 and considering the similar ‘Flax Pullers’ fetched £75,000 at auction in November 2018, this could be one to watch. 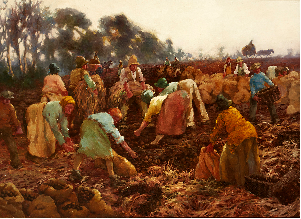 Two more modestly priced works by the same artist are Midday Meal Achill [lot 17, €4,000-€6,000] and Moonlit Street Scene [lot 18, €4,000-€6,000]. Norah McGuinness collectors will be interested in three fine examples from the artist, including her colourful gouache titled The Conservatory [lot 51, €5,000-€7,000]. Other notable female artists represented in the sale are Evie Hone, Mainie Jellett, Mary Swanzy, Gladys Maccabe and Constance Gore-Booth [Countess Markievicz].
Nevill Johnson’s Nurses, 1953 [lot 65, €10,000-€15,000] was exhibited at the Irish Exhibition of Living Art in 1953. This followed the completion of the artist’s photographic record of the city of Dublin and his work of this period appeared to be directly inspired by the city around him and by its’ inhabitants. This is one of the finest examples of that period. The group of nurses relaxing in a garden suggests a specific experience and scene recalled by the artist. Another Nevill Johnson work on offer is Patchwork [lot 74, €8,000-€12,000].  Colin Middleton’s work Genesis, 1967 [lot 70, €30,000-€40,000] marks the conclusion of one of the most significant and successful periods of Colin Middleton's professional life and is, despite the associations of its title, the last painting in what one might consider his defining series of works during this decade. Gables, Ardglass, 1967 [lot 72, €10,000-€15,000] and Miss Kitt [lot 71, €8,000-€12,000] are further fine examples in this auction from the artist’s different periods and moods.

Louis le Brocquy is well represented with a collection of the ever popular Táin prints [lots 80-87] being offered at €1,500-€2,000 each, but perhaps of more interest will be Milles Têtes (Thousands of Heads) C [lot 75, €40,000-€60,000]. Examples of this particular Aubusson tapestry has not been seen at auction before. This tapestry was once in the collection of businessman and former international rugby player Sir Tony O’Reilly.  A large collection of Basil Blackshaw works are on offer ranging in price from Dog with Muzzle, 1997 [lot 90, €20,000-€30,000] down to Red Tractor [lot 98, €1,000-€1,500].
Other names to look out for include: William Leech, Sir William Orpen, James Humbert Craig, Frank McKelvey, George Barret, LS Lowry, William Crozier, Donald Teskey, Diana Copperwhite, Sean McSweeney and many more.

VIEWING for this auction will be at the RDS, Anglesea Road entrance, from Saturday to Monday, 25 to 27 May 10am to 6pm daily. The auction will take place in the same venue on Monday 27 May at 6pm, and will be broadcast live at www.whytes.ie A superbly produced and expertly researched catalogue is available complimentary during the viewing or by post for €10. It is also available for free download at www.whytes.ie

[Please note: High resolution colour scans can be supplied on CD or by email as JPEG or TIFF format files in either RGB or CMYK mode. Please indicate which ones you want, the format and mode required, the address and contact and we will deliver]. Contact Matthew Slack, ms@whytes.ie or 01 676 2888 with your requests.