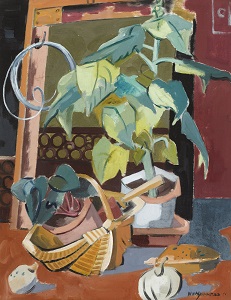 Whyte’s auction of Important Irish Art takes place at 6pm, Monday 28 May 2018 at the RDS, Ballsbridge Dublin.  The sale will offer collectors over 200 landmark examples by Ireland’s leading artists including Jack B. Yeats, Paul Henry, William Conor, Daniel O’Neill, Louis le Brocquy and many more. Presented in two sessions, the auction will also include a contemporary offering from the RDS CAP Dublin collection. Whyte’s invite bidders to view the sale at the RDS, Ballsbridge from Saturday through to Monday (day of the sale) 26-28 May 10am-6pm daily.

Leading the auction is an important oil painting from 1945 titled Morning Glory [lot 38, estimated €80,000-€120,000 illustrated] by Jack Butler Yeats. An expressive and theatrical example by one of Ireland’s most sought-after artists, this sizeable oil – 14 by 18ins - was exhibited widely in 1948  but has not been seen publically in over 35 years. The painting is beautifully presented in a carved Waddington frame and presented behind glass as per the artist’s instruction preserved on a label on the reverse. For those with a  smaller budget lots 34 and 35 (from €800) by Jack Yeats comprise collections of hand-coloured Broadsides published by the Cuala Press, Dublin dating from 1909. 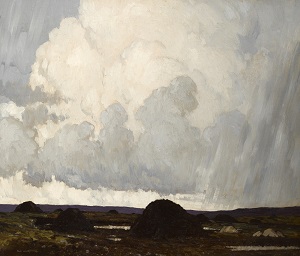 Two iconic Paul Henrys depict two different landscapes but command the same guide at  €50,000-€70,000.  The first to appear is lot 26 Western Skies (above left) which depicts an Antrim bog near Cushendun circa 1919.  It was exhibited widely during the artist’s lifetime and loaned to numerous shows in recent years highlighting its importance within the artist’s oeuvre. Lot 27, Killary Bay (right), is – according to Henry expert Dr S.B. Kennedy - the earliest known example by the artist to depict a sail boat and dates to 1910-1915. Given to the present owner’s grandfather – an amateur artist who painted with Henry – this oil on canvas has never before been seen publicly.  For the academic Henry collector a rare set of four ‘Folies Bergère’ gouaches executed while Henry was student in Paris c.1898 guide €8,000-€12,000 [lot 25]. 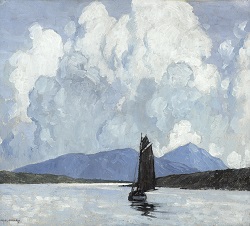 WORKS IN WATERCOLOUR
Other important examples in the genre of landscape painting include a Collection by the entertainer and artist Percy French. Five examples by French are on offer [Lots 14 to 18 with guides from €2,000 to €8,000] leading with the largest – Bog Landscape with Turf Stacks - presented in its original Belfast poker-work frame. Each work demonstrates Frenchs deft handling of the medium and include among them a view of the Rock of Cashel.  Watercolours of urban scenes by Harry Kernoff from the Segal Family Collection 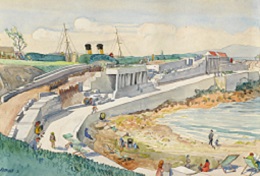 [Lots 39 to 48 guide from €800-€7,000] will be sure to cater to all pockets. The Segal family business was famous for manufacturing medals - such as those for the 1916 Rising and War of Independence and the GAA - and were the largest producers of metal badges in Ireland. The family were friends and patron to Kernoff throughout his career.  Designs relating to the 1916 commemorations in 1966 will delight both art and history buffs [Lot 44, €1,200-€1,500] while collectors from south county Dublin will be chasing two fabulous views of Dún Laoghaire pier from 1931 [Lot 40, €3,000-€5,000 illustrated]. 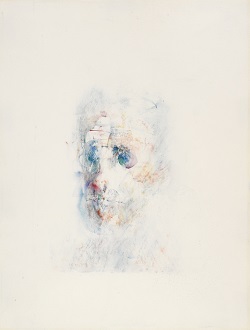 A portrait of James Joyce by Louis le Brocquy [Lot 77, €15,000-€20,000] – a wedding gift to the present owner from Bono – should attract broad interest. This bespectacled gentleman is probably one of the most recogniseable faces in Irish literature and this portrait forms part of le Brocquy’s famous ‘Head Series’.
Works by stained-glass artist Harry Clarke do not appear regularly at auction and a pair of oval-shaped watercolours illustrating The Stations of the Cross dating to 1927 for the Basilica at St. Patrick’s Purgatory, Lough Derg [Lot 33, €8,000-€10,000] will be an occasion for afficionados to catch a glimpse of his designs outside of a musuem setting. The watercolours demonstate his skill as a draughtman and show the exquisite detail he added to every area of the work. Another dynamic example on paper can be found in William Conor’s Greyhounds Exercising [Lot 37, €15,000-€20,000]. Executed in crayon - this rare subject in his ouevre - relates to an oil of the same subject which appeared at auction in the UK in 2007 where it fetched £90,000.  Lot 36, The Onlookers guiding €5,000-€7,000 is more typical of the street scenes Conor is best-known for.

Another of the “Belfast Boys”, Daniel O’Neill, is represented with a tender depiction of a mother a child in Maternity [Lot 52, €15,000-€20,000 illustrated]. The picture closely relates to a later oil, The First Born, now in the collection of the National Museums Northern Ireland. 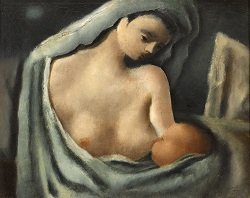 An impressive array of work by O’Neill’s contemporary Nevill Johnson from the Collection of Professor Eoin O'Brien [Lots 59-66] offer an overview to Johnson’s work from the Surreal to the Abstract. Leading the collection is the extraordinary Breakfast at Wilby, 1977  [Lot 59, €8,000-€12,000 illustrated] which was one of a small number of works in private hands to have been included in IMMA’s landmark ‘The Moderns’ exhibition in 2010/2011. This work, and the other seven examples on offer, are exceptional examples of Irish Modernism by one of the most significant artistic figures in the capital’s art scene of the time. A copy of the book Nevill Johnson, Paint the Smell of Grass accompanies each of the eight examples in the sale. 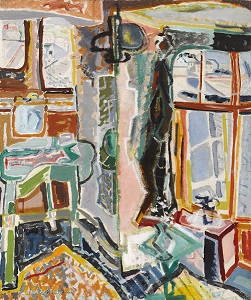 Session II in the auction includes 42 lots by recipients of The CAP Foundation Award, a program  set up in 1998 by Tony and Linda Pilaro and which ran for ten years. These works were part of a larger private art collection and have been donated to the RDS to help fund the development of the RDS Visual Art Awards. While some of the artists will be very familiar to collectors, such as Guggi or Michael Cullen, others will be new to most buyers on the secondary market. Most of them were graduates of NCAD and with guides ranging from €100 to €3,000 all tastes and budgets should be catered for. Illustrated, lot 221 by David Roche guides €200-€300. 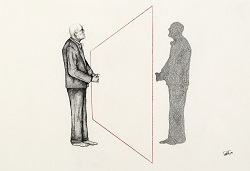 A colourful collection of works by Kenneth Webb ranging in guides from €4,000-€6,000 for a 1960s oil Summer Profusion [Lot 114] to a large 30 by 40in canvas, Summer Garden [Lot 112, €10,000-€15,000]. The ever-popular still lifes by Mark O’Neill, shawlies by Markey Robinson and jewel-like landscapes by Arthur Armstrong are all on offer as well as the more contemporary names Alice Maher, Sean Scully [Lot 96, €3,000-€5,000 illustrated below] Barrie Cooke, William Crozier and Tony O’Malley. A strong equestrian collection by Peter Curling and David Trundley will satisfy the horsey set while a select array of sculpture by Rory Breslin, Gary Trimble, Anthony Scott [Lot 110, €3,000-€5,000 illustrated left] and John Henry Foley add another dimension to the mix. 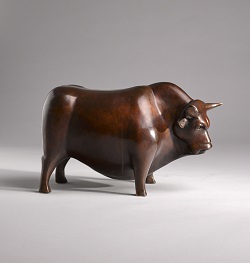 All the artworks are on display with full descriptions and several with insightful notes from art experts at www.whytes.ie This fabulous auction – comprising over 200 works of art – will be on view at the RDS Anglesea Road entrance, Ballsbridge, Saturday to Monday, 26-28 May 2018, 10am to 6pm daily; admission and parking is free. The auction will be broadcast live on the internet at whytes.ie, invaluable.com, auctionzip.com, encheres.lefigaro.fr and the-saleroom.com; collectors around the world can bid live from their computers, smart TV’s, mobile phones or android devices. 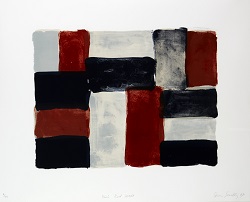