OVER 1M FOR AUCTION IN WHYTES IRISH & INTERNATIONAL ART SALE

After a record breaking 2018, Whyte’s auction of Irish & International Art at 6pm, Monday 4 March 2019 at the RDS will offer collectors – including those many disappointed underbidders from last year - another opportunity to acquire key pieces from the first major sale of 2019.  This auction boasts many of the premier names in Irish art including Jack B. Yeats, Paul Henry, William Orpen, Louis le Brocquy, Margaret Clarke, Norah McGuinnes, Tony O’Malley, and many more. Whyte’s invite bidders to view the sale on-line at www.whytes.ie and in person at the RDS, Dublin, Saturday through to Monday, 2 to 4 March 10am-6pm daily.

JACK BUTLER YEATS
This sale offers two exquisite oils by Jack B. Yeats. The first, A Passage is Required, 1953 [lot 19, €100,000-€150,000], depicts two figures negotiating with a boatman. He is a familiar figure in Yeats's oeuvre. He derives from the ferryman of Dinish Island who took Yeats and J.M. Synge around the islands of Connemara in 1905. The work has been in a private hands since it was purchased at the Waddington Galleries in 1954. The second work, Justice, 1946 [lot 21, €100,000-€150,000], shows a woman dusting in an empty courtroom. Her central role in the painting is emphasised by the intense daylight which illuminates her form. Light floods in from the large window to the left. The cold grey blue tones of the walls contrast with the warm impasto of orange red that dominate the foreground of the painting. This work has not been seen at auction before. 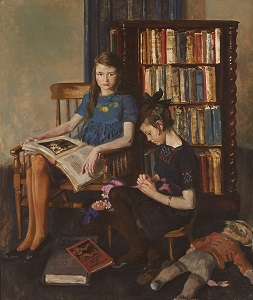 After setting an auction record for a Margaret Clarke work in November, Whyte’s have another exceptional example on offer this March. Double Portrait of Two Girls [Lot 13, €20,000-€30,000] possibly depicts the artist’s daughter Ann, who modelled for many of Clarke’s works during the 1920s, and a friend in the Clarke family home at 48 North Circular Road. On the bookshelf the name 'Orpen', whom Clarke studied under at the Metropolitan, can be distinguished on the top shelf while an illustration by the artist’s husband, Harry Clarke, can be seen on the cover of the book in the foreground. A former owner of this delightful work was Dr Karl Mullen, the famous Irish rugby player, and member of the first Ireland team to achieve the Grand Slam in 1948.  Norah McGuinness is represented in the sale by Annie, 1956 [€8,000-€12,000, lot 52, illustrated right] and Grace Henry provides two oils, Madonna Del Sagraeto [€2,000-€3,000, lot 25] and The Glass Shop [€4,000-€6,000, lot 26] There is also an outstanding Cubist composition byMainie Jellet, Abstract Design [€9,000-€12,000, lot 29]. There is also a small selection of works from the collection of the late Gladys Maccabe, who passed away in her 100th year in 2018. 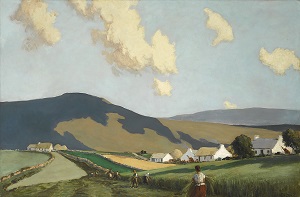 James Humbert Craig was well established as a painter of landscapes by the 1920s when he was commissioned by both commercial and government bodies to produce images for posters. His most famous poster was 'Flax Pulling in Co. Antrim'. On offer on 4 March is the oil, Flax Growing, Northern Ireland, 1927 [€20,000-€30,000, lot 10], the original work used for that poster. It is the largest Craig work ever to be offered at auction and is presented in a hand-carved Waddington frame. A museum worthy piece.
Paul Henry was enchanted with Kerry, “It is lovely” he told James Healy, a friend in New York, “Wherever one turns there is material for dozens of pictures … I felt that if I spent a lifetime … I would never exhaust all the possible subjects.” The fruits of his time in ‘The Kingdom’ were exhibited at Combridge’s Dublin where A Kerry Bog, 1934-1935 [€60,000-€80,000, lot 9, illustrated right] was first purchased. This painting is possibly one of the earliest pictures inspired by Henry’s trip there according to his biographer Dr. S.B. Kennedy. 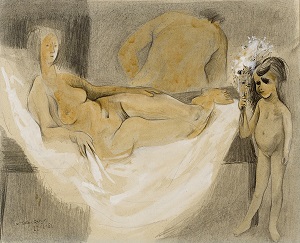 Following huge interest in Louis le Brocquy works in the 26 November sale, once again there is plenty on offer from the artist at all price ranges. Study for A Family, 1951 [€50,000-€70,000, lot 49] is one of a series that culminated in the celebrated painting, A Family (1951), in the collection of the National Gallery of Ireland. The artist has been recognised as one of the most significant Irish artists of the twentieth century, and A Family as one of the most iconic images in the Irish context, in its challenges to the social and cultural mores of the time as well as its radical departure from traditional methods of representation. Examples from the artists ‘Portrait Heads’ series are on offer with Image of W.B. Yeats [€18,000-€22,000, lot 77] and Image of Francis Bacon [€20,000-€30,000, lot 74]. Louis le Brocquy first met Francis Bacon when he moved to London in the late 1940s. They remained friends up to Bacon's death. An offering of the ever-popular Táin prints [Lots 87-92] will guide €1,500-€2,000 each.

WATCH OUT FOR…
An oil by William Orpen, Lord George Hell [€25,000-€35,000, lot 14], one of the artist’s own favourite works, found on his easel after his death. A work by John Charles Dollman, a 19th century English painter, entitled The Course of True Love Never Did Run Smooth [€10,000-€15,000, lot 131] which looks like an illustration to a Victorian melodrama or a Russian novel such as War and Peace.
An iconic Cecil Maguire painting, entitled The Bold One [€6,000-€8,000, lot 48] contrasting the “bold” fashionable clothes of a returned émigré to Connemara with her former neighbours in traditional garb.
A watercolour of the proposed new post office in Sackville Street – the GPO in O’Connell Street – by its architect, Francis Johnston [€3,000-€5,000, lot 122]. A notable portrait of the Duchess of Devonshire [€8,000-€12,000, lot 119] by Offaly born artist Charles Jervas would look well in the family’s Irish seat, Lismore castle, or anybody’s castle for that matter.
Other notable artists represented in the sale are Banksy, Charles Brady, Samuel Brocas, Mildred Ann Butler, William Conor, Barrie Cooke, Gerard Dillon, Sir Terry Frost, Seán Keating, Harry Kernoff, Dan O’Neill, Tony O’Malley, Markey Robinson, Estella Solomons, and Kenneth Webb, to mention but a few!
All the artworks are on display with full descriptions and several with insightful notes from art experts at www.whytes.ie. This fabulous auction will be on view at the RDS, Anglesea Road entrance, Ballsbridge, Saturday to Monday, 2 to 4 March, 10am to 6pm daily; admission and parking is free. The auction will be broadcast live on the internet at bid.whytes.ie, invaluable.com, auctionzip.com and encheres.lefigaro.fr; collectors around the world can bid live from their computers, smart TV’s, mobile phones or android devices.
There is no extra charge for buying online via Whyte’s platform, bid.whytes.ie