Ship’s Log with accounts of famine relief to Ireland.

HMS Terrible was the largest steam-powered, paddle-wheel frigate in the world when she was launched in 1845. Her ship’s log 1847-1850 begins with her service on the coast of Ireland, commencing with the loading in Woolwich, of fresh beef and vegetables and a bale of clothing for the Relief Association for Belmullet and their landing in Black Sod Bay. Other items carried to Ireland for famine relief included bags of bread (35 to 495 at a time), sacks of barley, seed oats, swede, parsnip and turnip seed. Later entries include references to the Crimean War and the 1848 Young Irelander Rebellion. The log is lot 48 in Whyte’s Eclectic Collector auction on September 15, estimate €1,000-€1,500. 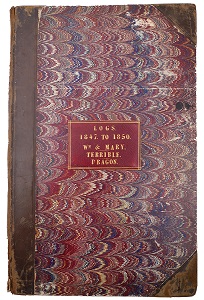 The relief felt by the soldiers of the 64th (2nd Staffordshire) Regiment who commissioned this silver salver, for presentation to their minister Rev. T. Medlicott, can only be imagined. Stationed in Loughrea, they had survived an outbreak of cholera; the progress towards was reported in the local newspapers. The mortality rate in Ireland was among the highest in Europe for this pandemic: caused by generally unsanitary conditions, the custom of visiting neighbours' homes in the evenings, and the holding of wakes in the presence of the remains of deceased victims. The salver, commissioned from a Dublin silversmith in 1832, is lot 32 in Whyte’s Eclectic Collector auction on September 15,
estimate €500-€700. 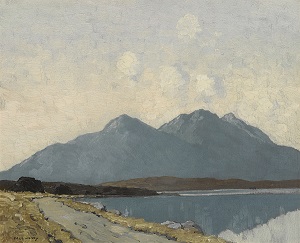 The McFall family of Belfast were renowned in the opening decades of the 20th century for producing beautiful harps. In particular they used low-relief carving of Celtic interlace to great effect to decorate them. The harps were first and foremost musical instruments and the McFalls were innovators, producing instruments in a variety of sizes and even reviving the steel-string bardic-style harp. This harp was discovered in a car-boot sale in Sydney, Australia earlier this year and is lot 86 in Whyte’s Eclectic Collector auction on September 15, estimate €2,000-€3,000. 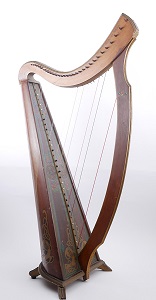 The headmaster’s chair of St. Enda’s school, Rathfarnham is a practical and frugal piece of furniture, as you would expect Padraig Pearse’s chair to be. It remained in the Hermitage after the school’s closure and was removed by Senator Margaret Pearse in the 1960s and given to Thomas Ernest Pearse, the son of Padraig’s half-brother James. Thomas Pearse was the last-surviving male family-member named Pearse. Padraig Pearse’s chair is lot 95 in Whyte’s Eclectic Collector auction on September 15, estimate €1,500-€2,000. 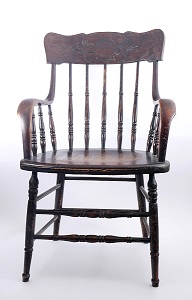 Proclamation of the Irish Republic.

Whyte’s Eclectic Collector auction on 15 September includes a 1916 Proclamation. Printed in Liberty Hall on poor quality paper in a print run of less than 500, most of which were pasted to poles and buildings, this is one of the rare surviving examples of the document that launched an uprising and changed Ireland forever. This example was restored and conserved to museum standard in 2005 and has been exhibited in the National Print Museum, Beggar’s Bush since 2006, where it was displayed with the Wharfdale printing press on which it was printed. Lot 93 is estimated
€90,000-€120,000. 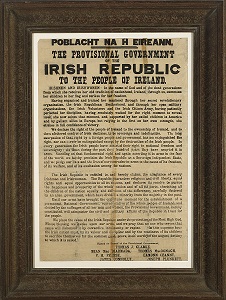 A piece of the first airplane to fly non-stop across the Atlantic.

One of the greatest feats of aviation of the early 20th century had its climax on a bog near Clifden in Connemara on 15 June, 1919. Believing they had found a green field to land on, John Alcock and Arthur Brown crash-landed their Vickers Vimy bi-plane into Derrygimlagh Bog, having flown from St. John’s Newfoundland, the first non-stop trans-Atlantic fight. Local man Jim Fawl
removed a souvenir from the crash site, a wooden rib, probably part of an aileron. The piece of aviation history came to light almost one hundred years later on RTE’s National Treasures programme and has been on exhibition in the Museum of Country Life, Castlebar since then. It is now lot 137 in Whyte’s Eclectic Collector auction on September 15, estimate €6,000-€8,000

Frederick E Dixon (1913-1988) was brought up in Peterborough, graduated in mathematics at Cambridge and went on to become a meteorologist in Edinburgh.
He joined the fledgling Irish Meteorological Service in March 1939, starting in Foynes. He was to serve for nearly 40 years, in due course training a generation of Irish meteorologists. He was also a truly great collector, best known in philatelic circles but also a keen numismatist and medal and postcard collector. Fred’s many collections have been dispersed over the last thirty years since his death. Whyte’s Eclectic Collector auction includes the last tranche – his fascinating and valuable collection of medals, badges and buttons. The collection includes awards in gold, silver and bronze for excellence in a broad range of endeavours in Ireland, from surgery to growing roses. Industrial awards include lots 330-332, medals awarded in the 1880s to Martin Mahony and Brothers, Blarney, whose mill is now the home of Blarney Woollen Mills. Fred Dixon’s collection of medals is offered in lots from 288 to lot 349, estimates range from €80-€1,500 in Whyte’s Eclectic Collector auction on September 15. 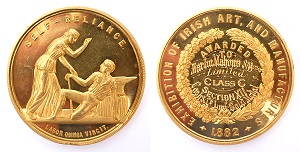 Portraits of  Bill Clinton, George Best, The Chieftains and the Dubliners signed by the subjects.

Limerick artist Barbara Hartigan has a talent for portraiture. Working from photographs she draws and paints her favourite personalities from the worlds of show business, politics and sport. Then, when her subject makes a public appearance in Ireland, she brings the portrait to the venue and asks them to sign it. Five portraits, signed by Barbara and the subject(s) are offered in Whyte’s Eclectic Collector auction on September 15. They include lot 178, Bill Clinton with Limerick City in the background, estimate €500-€700; George Best, estimate €300-€500; and The Dubliners, a large group portrait in pencil, estimate €500-€700. 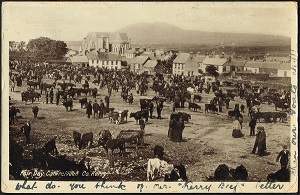 World War II Japanese army officers’ uniform included a sword, known as a kai-gunto, based on the traditional samurai’s sword. If the officer owned an old blade which had been passed down to him he could submit it to the armoury for approval and have it fitted with the correct hilt and scabbard. Lot 416 in Whyte’s Eclectic Collector auction on September 15 is an example of this type of sword which certainly saw some action, as the scabbard is scarred and scorched from what appears to have been a bullet or shrapnel strike. Estimate €500-€700.

Bono’s Lord of the Flies.

Anyone of a certain age who sat the Intermediate Certificate will recognise both the edition and condition of William Goulding’s Lord of the Flies, lot 589, Whyte’s Eclectic Collector auction on September 15. This example was used by Paul Hewson - now better known as Bono -in his English studies and he wrote his name clearly on the title page. The book is consigned by a Mount Temple Comprehensive School classmate of Paul’s and is offered with an estimate of €400-€600. 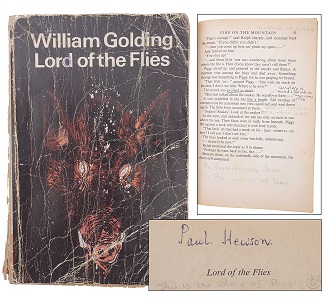 The word ‘workhouse’ doesn’t usually conjure up images of drunken revelry but a 1915 audit of the Strokestown Union, offered in Whyte’s Eclectic Collector auction on September 15, suggests that for some at least it may have been a merrier place than history would have us believe. The type-written letter dated 16 March, 1915, is from G. Wynne, Auditor, Local Government Board, summarising the findings of his audit of the 1914 accounts of the Strokestown Union. He notes that the 'Extras' being purchased by the Hospital include a 'considerable amount of wine, porter and whiskey'. The letter is lot 275 and is attractively framed with a hand-coloured map of the Sligo and Boyle and Adjoining Unions' Workhouses. Estimate €200-€300. 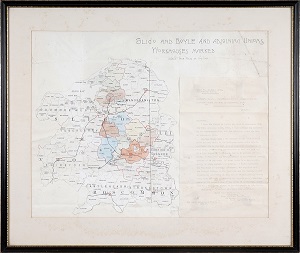 Viewing at Whyte’s, 38 Molesworth Street, Dublin 2: Wednesday to Friday, 12 – 14 September, 10am to 5pm daily. The auction starts at 11am on Saturday 15 September at Freemason’s Hall, Molesworth Street, and will be broadcast live at www.bid.whytes.ie